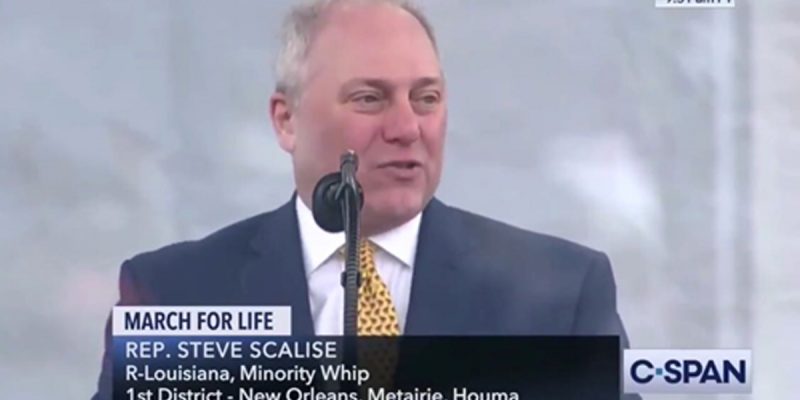 A couple of things are going on which, in combination, might just result in Steve Scalise getting the gavel to become Speaker of the House after the 2023 elections. We’re not making any predictions, but we will do a little speculation here.

First, there are increasing signs that next year’s mid-term elections will result in the Democrats losing their current House majority. Seven House seats will be moving from blue states to red states based on the Census results, though it isn’t assured that will result in a +7 for Republicans. A couple of those states losing population, specifically New York and California, will almost assuredly be carving up a Republican district in order to preserve Democrat seats, though that’s careful work – put too many Republican voters in a Democrat district and you end up with a swing district you might lose.

The Democrats couldn’t get anybody into the runoff in Texas’ 6th District, which came open due to Ron Wright’s untimely death. The district, which picks up a sliver of the Dallas-Ft. Worth metroplex and then trails off to the south and southeast, went to President Trump in the 2020 election by only three percent. But Republican candidates won 61 percent of the vote in the jungle-primary special election Saturday, with Wright’s widow Susan and a Republican state representative named Jake Ellzey taking the top two spots.

Then there are the Democrat House members who are retiring or running for something else. From The American Spectator’s Dan Flynn, in his email newsletter yesterday…

That Doesn’t Play in Peoria

Congresswoman Cheri Bustos, a five-term representative from northwestern Illinois, announced her retirement from the House after her term expires at the end of this session. She won by a 52-48 split in 2020. Trump won the district in both presidential runs. Bustos, in retiring, chooses to end her time in Congress on her own terms. Multitrillion-dollar spending bills, massive tax increases, and a push for DC statehood, her announcement suggests, does not play in Peoria.

Maybe Issue an Eviction Notice Instead?

Rep. Ron Kind, who occupies a district due north of Bustos’s, faces similar headwinds albeit in a very different storm. As noted in this space last week, Fox News caught him profiting from renting space to a massage parlor that advertises on various “adult services” websites. He now plays dumb. Beyond this, he goes on the offensive. He calls the Fox News report “a baseless smear rooted in racism and insinuations.” He further blames his Republican opponent, saying: “Because of Derrick Van Orden and his allies pushing lies, local police are increasing patrols to ensure the safety of this Asian-owned small business. In light of what has happened across the country and especially in Atlanta last month, it is irresponsible, dangerous and despicable of Derrick Van Orden to slander this local business owner and put law enforcement in harm’s way.” The scandal bequeaths the 13-term Democrat a new nickname borrowed from one of the websites that features his tenant: Rub-Maps Ron. He won by less than three percent in 2020 in a district in which Donald Trump comfortably claimed victory in both runs. One imagines 2022 as quite unkind to Ron Kind.

Then there’s this in the Washington Examiner…

House Democrats already faced several challenges in trying to hold the majority in 2022. Now, a rash of departures is complicating the problem further.

Rep. Charlie Crist of Florida on Tuesday is set to announce a run for governor, a job he held as a Republican and then independent from 2007 to 2011. And on Friday, Rep. Cheri Bustos, who headed House Democrats’ campaign arm in 2020, when the party unexpectedly lost seats, announced her retirement. In Ohio, Rep. Tim Ryan is running for Senate. In all three cases, the departing lawmakers faced the prospect of running for reelection in districts drawn unfavorably to them. Republicans control the redistricting process in Florida and Ohio. And Illinois is losing a House seat, so the shape of Bustos’s current district, won narrowly by former President Donald Trump in 2016 and 2020, is unknown.

House Democrats are already at a disadvantage for the 2022 midterm elections, near two years into President Joe Biden’s administration. Over the past century, the president’s party has only picked up seats three times. And with Republicans needing to net five seats in the 435-member House, Democrats have the narrowest majority for either party since the 1930s. With such a narrow margin, each departure has an outsize effect.

Though House Speaker Nancy Pelosi, a San Francisco Democrat, will get some breathing room when Rep.-elect Troy Carter of Louisiana takes office next week. An open seat in New Mexico will be filled on June 1 in a special election strongly favoring Democrats, widening the party’s narrow margin a bit further.

In Kansas, they’re openly talking about redrawing Sharice Davids, the only Democrat in their House delegation, out of her seat. And there are lots of other examples around the country of the GOP embracing some bare-knuckles politics in redistricting so as to manufacture seats.

Not to mention the NRCC, the National Republican Congressional Committee, the PAC tasked with winning House seats for the GOP, has upped its list from 47 winnable Democrat seats and is now targeting 57 seats for flips.

The first mid-term election for any president is a difficult one. You usually get killed on House seats if you’re the party in power. Couple that with the fact we’re talking about half-dead Joe Biden and his far-left handlers, who continue pushing a Hard Left agenda disfavored by wide majorities of the country – and while presidential approval polls still show Biden slightly above 50 percent, the TV ratings for his State of the Union speech indicate nobody cares very much about him and his centerpiece buzzword, “unity,” is a total failure with the public. Only 23 percent of the country thinks America is more united with Biden in office than with Trump.

You don’t even have to be good to beat the Democrats in an atmosphere like that. Which is fortunate, because Kevin McCarthy is, well, not good. And it’s starting to become a little less likely that he’s going to ascend to Speaker when the House majority flips back to the GOP.

The Frank Luntz phenomenon is something which we’ve never understood. He’s an exceedingly bad pollster who comes up with unrealistic takes on current events based on “focus groups” built by opaque means – the common snark is to call them “Luntz’ dunces” – and yet he’s managed to gain influence, as Carlson notes, with lots of establishment Republicans while working for some of the worst corporations out there (Google, Purdue Pharma, Nike).

That Kevin McCarthy is “renting” a room in Luntz’ apartment in the Penn Quarter in DC is an uncommonly bad look. Coming after McCarthy managed to survive the buzz surrounding the supposed extramarital affair he had with Renee Ellmers when the latter was a congresswoman from North Carolina for a brief time, it isn’t the kind of black mark on his escutcheon that will make him more likely to be Speaker.

Both are disqualifying. McCarthy will be a lobbyist in two years.

When the House GOP caucus failed to bounce Cheney, who is dead in the water for re-election back in Wyoming, it was at McCarthy’s quiet urging that she remain. That rankled the Freedom Caucus and the conservatives, who are the group in the caucus which is growing. And it appears McCarthy can’t save her anymore, since she’s only gotten worse following her survival the first time.

Scalise is the minority whip. He’s the figure among the House leadership who carries the most respect across the various factions. If McCarthy can’t survive the Luntz fiasco – or whatever else Carlson uncovers about him – it’s likely going to be Scalise ascending to Speaker in January 2023.

Of course, an awful lot can happen between now and then. At one point Bob Livingston, who held the same seat Scalise now holds, was set to become Speaker to succeed Newt Gingrich and that didn’t work out. We ended up with the horrific child molester Denny Hastert instead, and that House majority was squandered.

But Scalise appears a bit more durable than Livingston was. If McCarthy falls, he’s a very good bet to get and hold that job for a while.