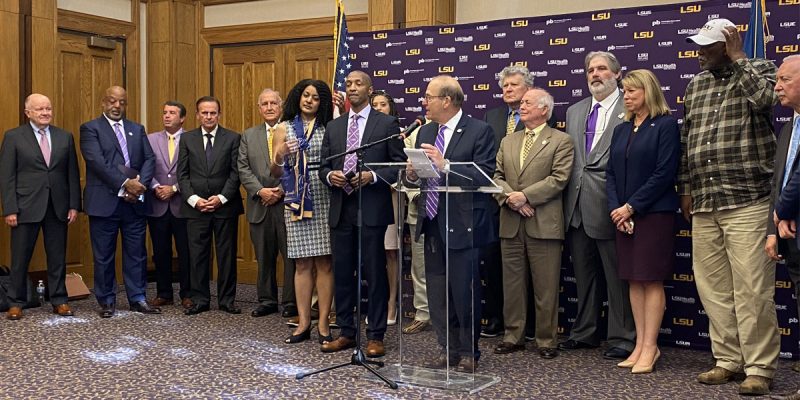 So, the Louisiana State University System decided to take a chance on someone unproven and trendy as its next president. In light of this, if you care about quality higher education in the system, what is to be done?

With its announcement earlier this week of three finalists for the position, the LSU Board of Supervisors staked out significantly diverging approaches to the leadership question. University of Louisiana System Pres. Jim Henderson has extensive higher education management experience at all levels, including running a university system with more students and schools than the LSU system, plus knows well the environment in which he must operate.

More out of the box, former science and technology leader in the Republican Pres. Donald Trump Administration, Kelvin Droegemeier would provide an outsider perspective but with impressive academic credentials and long tenure at the highest levels of government.  He also served for nearly a decade at a senior level at my alma mater. In some sense this would have replicated LSU’s approach when it went with Sean O’Keefe in the first decade of the century.

The least experienced of the trio was William Tate IV. With a background in education, while he had lengthy administrative service at a large private university, it was in a mid-level post (after serving as chairman of the African-American Studies and Education Departments). Less than a year ago he made it into a senior post, provost at the University of South Carolina or the second-ranking official (and the first black to hold that spot), although he initially had applied for the job at top, chancellor.

To put this in baseball terms, to have given the job of running an entire university system to Henderson would have been like signing as a free agent a solid starter from another team. Bringing on Droegemeier would have been like signing an American who became a big star in Japan after having performed as nondescript player previously in the big leagues. Giving Tate the gig would be like promoting someone who had spent many years at AA ball who had just recently gotten a taste of the AAA level. Picking Tate would indicate less an interest in demonstrated credentials or bringing in a wider perspective than insular academia than it would in taking a chance on someone offering something else.

That’s what the Supervisors did – except for the student member, all appointees of Democrat Gov. John Bel Edwards who praised the decision – unanimously. And what Tate seems to offer differently is not just the wokeness of the last permanent appointee, the disgraced F. King Alexander, but an early and enthusiastic endorser of critical race theory.

This theme, that social and governmental systems in America inherently oppress racial minorities and, in particular, blacks, and thus fundamental systemic change is required even if it involves unequal treatment of people on the basis of race, resonates throughout Tate’s academic writings. A 1995 piece, written before he took on administrative duties, in the education journal Theory into Practice for a special issue on “Culturally Relevant Teaching” provides an illustrative account of his pedagogical worldview.

In it, Tate argues that black children optimally learn mathematics differently from the bounds of an allegedly white-created/”Eurocentric” pedagogical environment in which they typically must labor, which means that their true abilities go unrecognized or undeveloped, as reflected in lower usual measures of achievement. This kind of math education also places too much emphasis on mastering math and gives short shrift to using math as a social change agent, he claims, as the traditional approach lacks relevancy to their lives. Successful math education for black children, he asserts, transpires when they promote this change, or as he notes in his closing, “success represents the power of returning to the root of African tradition” (emphasis his).

Thus, disproportionate underachievement of blacks in math doesn’t come from forces exogenous to government and society generally and pedagogy in particular, but from those very sources, defined as they are by institutions generated from a “white” culture. Therefore, systemic change away from academic math expectations for blacks relying solely on markers such as understanding general principles, solving specific problems using these, and explaining these solutions as revealed through testing, must happen with supplementation with, if not replacement by, instruction in and measurement of activism in the teaching of math to black children.

Given that this worldview easily morphs into a strategy of neo-racism posing as anti-racism for its implementation, does this portend a struggle over the next few years for the LSU System to maintain a serious approach to education? Higher education officials, and especially those with the people’s representatives looking over their shoulders, are marvelously mushy creatures, as Tate himself showed in his year in South Carolina.

There, just a couple of weeks ago, its legislature passed its Reinforcing College Education on America’s Constitutional Heritage (REACH) Act (after years of resistance from higher education). The bill passed its Senate unanimously, attracting only a dozen nays in its House of Representatives, all black Democrats.

The new law mandates that new students starting this fall enrolling in the state’s institutions of higher learning, with few exceptions to graduate must pass a three-hour course “in American history, American government, or another equivalent course of instruction that provides a comprehensive overview of the major events and turning points of American history and government which includes, at a minimum, reading: the United States Constitution in its entirety; the Declaration of Independence in its entirety; the Emancipation Proclamation in its entirety; a minimum of five essays in their entirety from the Federalist Papers as selected by an instructor; and one or more documents that are foundational to the African American Freedom struggle.”

This is something Louisiana should do, even as you can see how it can be abused by instructors wishing to subvert its implication that the ideas behind the Constitution, Declaration, and the Federalist are laudable. It’s highly likely that such instructors might  infiltrate woke or other Marxist-related sentiments into the mix, something which needs to be policed in order to make such a law useful. And Tate played a role in the South Carolina bill becoming law, as he was, by his own description, “involved reconciling the principled differences of House members related to the required readings described in the legislation.”

Translation: the large Republican majority in the South Carolina House – unlike the rudderless GOP majority in the Louisiana House – was going to imprint its agenda, and Tate on behalf of a reluctant state higher education lobby had to get the best deal that involved Democrats, if not voting for it, at least toning down their rhetoric such as saying the bill would require teaching “falsehoods” about American history that could lead to “1861 again in South Carolina”. Indeed, the “foundational” requirement appeared late in the process.

Like any bureaucrat on the public dime, higher education leaders hired at will do have to conform to the wishes of the elected officials that control those purse strings. Unfortunately, the organization of higher education in Louisiana makes obtaining this accountability more difficult than necessary, as witnessed by the continued inaction over LSU’s flouting admissions rules by letting in an impermissibly large amount of less-qualified students.

So, the Legislature will have to keep a really close eye on Tate to rein in his less-salutary woke instincts if he tries to press them on LSU. Passing a law like the one mentioned above would be a good start.

If that’s done, maybe he’ll turn out as a competent manager who puts the school on better footing. Hopefully, the Legislature won’t have to intervene to keep the LSU System on task, drawing upon the next governor’s Supervisors.