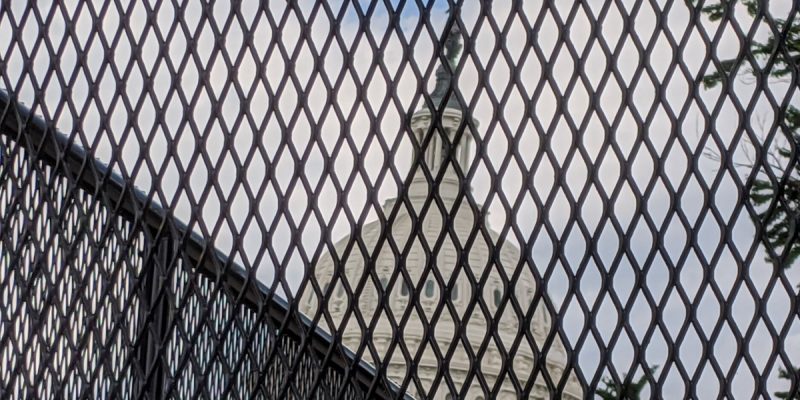 The US Capitol is the preeminent symbol of American democracy.

It is where our nation’s laws are passed and on its western steps is where our elected presidents take their oaths of office and promulgate the overarching theme and vision for their term as leader.

The Father of Our Country George Washington laid the cornerstone for this iconic structure in 1793 and practically every great figure in our nation’s history has at some point walked through its corridors or in very special instances was afforded the privilege of lying in state under its cast-iron dome.

Today the working monument to the American federal republic is surrounded by visuals that harken back to the late German Democratic Republic.

What was once an open area is now secured within seven-foot high unscalable metal fence that stretches along a 1.25 mile perimeter around the US Capitol.

That fence is further reinforced with concrete jersey walls at the fence’s base. Behind the obstruction Capitol police walk within the secured area in a manner of a border guard.

These measures came about after the January 6th riot where unprepared and understaffed Capitol police were overwhelmed by a mixture of Trump supporters protesting the outcome of the 2020 election, professional provocateurs, and general mayhem participants willing to attach themselves to any disruptive mass action regardless of ideology.

What stands today almost a year later is a scaled down version of what was erected in the aftermath of January 6th.

Until March a larger fence topped with razor wire was in place that wrapped a footprint three miles and the current fence around Capitol Hill and extended as far north as Union Station.

The White House has its own external fencing running through Lafayette Square (where the equestrian statue of Andrew Jackson amazingly still stands) though it has gates that are opened.

The current security measures are both unsettlingly extreme and absolutely unnecessary.

Any large gathering of protesters can be easily anticipated and managed by adequate police and if need be national guard presence.

Furthermore as federal authorities aggressively pursued criminal cases against those who stormed (or even just sauntered in) the US Capitol (in contrast to the other riots that erupted across the country), it’s likely anyone is remotely inclined to staging any kind of protest in the District of Columbia.

DC House Delegate Eleanor Holmes Norton has spoken out against a permanent wall around the US Capitol as hampering local access in Washington and has filed legislation prohibiting the fence from remaining in place.

As of now Washington is a veritable ghost town, with boarded up businesses along avenues that were bustling with activity pre-COVID.

You could literally stand in the middle of Independence Avenue between the House office buildings and the US Capitol and not worry about dodging vehicles.

Even cabs are in short supply in a town where folks bounced from one appointment to another.

Finding places to eat was a challenge.

A German restaurant near the White House dutifully kept its doors open but the sidewalks and businesses were deserted. They weren’t seating people in the dining area but on small tables in the cafe. There was no point opening an area that wasn’t being utilized.

The owner, an aged immigrant from Austria, came by the table to chat a bit about the struggles she faced, between finding staff and finding customers.

The federal government was burning her on both ends, paying people generous unemployment benefits thus creating a state-manufactured worker shortage while also keeping their office buildings empty through having staffers teleworking from home.

This at a time when state and local governments have been back to work for almost a year in some cases.

The nation’s capital is starting to stir back to life gradually. Many of the Smithsonian museums have reopened over the past month.

The city government, starved for revenue, has relaxed what were some of the most onerous COVID-19 restrictions of any political jurisdiction in the nation.

But it’s the federal government that powers the District of Columbia (a reality that the pro-DC statehood advocates fail to grasp) and until they order their employees to end their yearlong pajama party and show up to work, local commerce will remain stifled and Pennsylvania Avenue will have a tumbleweed feel to it.

And tourism can only do so much.

Taking down the unnecessary security perimeter around the US Capitol would be a good start in helping change the atmosphere and disperse the gloom that has settled over Washington.

Congress is the American people’s house and it’s time to make it look less like East Berlin.