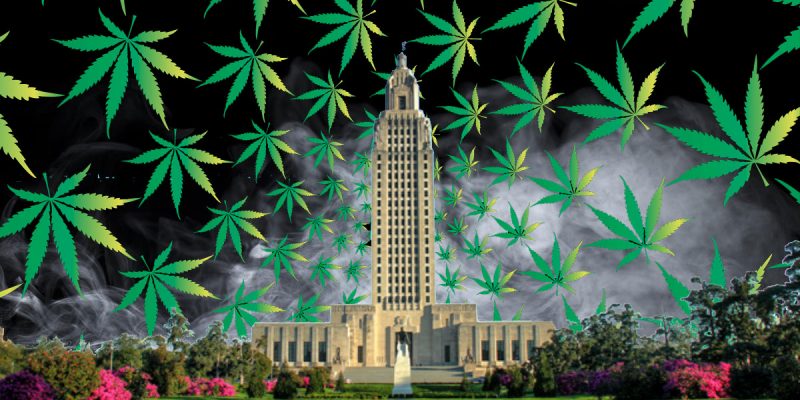 This week, Republican state Rep. Tanner Magee’s HB 391 won legislative approval and now heads to Democrat Gov. John Bel Edwards who has said he’ll sign it into law. It creates an extraordinarily relaxed process that allows members of the public to get their hands on over a hundred joints a week ostensibly for medical reasons so open-ended that in short order some doctor somewhere will “recommend” it for halitosis.

Don’t expect all the “patients” to sit tight on their stashes. Unused portions will filter out onto the street for those willing to pay more for less bureaucracy to get high. Watch over the coming years the state’s two producers, allied with two of its university systems, ramp up production to meet this demand (and they’ll get a piece of the increased action as well).

But Magee’s back-door weed legalization is now also about puffing up Louisiana’s tax burden, because he has another bill wafting through Louisiana’s capitol. HB 514, which is coming up for Senate floor approval after radical changes, would try to capture government revenue from the predictable upswing in weed consumption. That bill applies the state’s 4.45 percent sales tax to currently untaxed medical marijuana sales ad infinitum.

Meaning forever. Because Magee’s bill as amended also prevents 0.45 percent of that tax, first imposed in 2016 and reimposed in 2018 and currently sunsetting in 2025, from rolling off as scheduled. The proceeds from the newly-permanent 0.45 percent sales tax would go mostly to road construction, although half of the amount collected on medically-authorized spliff would head to funding early childhood education and public defense, two expenditure areas chronically short on stable revenue.

No doubt that diversion is designed to suck in votes from tax-leery legislators cognizant that keeping the tax on the books separates the people from more than $400 million a year of their money. Since legislators already have agreed to backdoor legalization of smoking dope, the consolation would be that increase would help out funding these two functions, as well as throw money at – without insisting on reforms that could result in over $100 million a year in additional infrastructure money – working down a road construction backlog.

In short, while more fiscally responsible legislators, and/or those who don’t like regressive taxation, might balk at making the tax increase permanent if it only addresses roads, the deal could become amenable to them if it also tries to cover the two other policy areas. As the matter will need at least two supermajority votes to pass – on the Senate floor (where it already achieved that feat when Magee Senate allies needed approval to slap on the roads component onto the original lid taxation) and for House concurrence, a lot of anti-tax legislators would have needed to find this inducement attractive to pick up their votes.

However, the anti-tax crowd so far isn’t biting. The new House Louisiana Conservative Caucus – a group of 41 of the 68 chamber Republicans who pointedly have kept Magee and his allies excluded – has announced its members oppose the bill, and some Democrats who oppose regressive taxes might well join them in this. With all of the supermajority hurdles in place, the bill seems unlikely to progress.

If so, Magee’s attempt to permanently expand government will fail unless he backs down on the permanent increase and gets the Senate to yank out the amendment. As it stands now, without giving up on the Ganja Gambit, Magee will be responsible for expanding the marijuana supply with effective tax incentives for consumption.

Either way, the permanently increased drug use and its consequences from the faulty decision to pass HB 391 will remain.

Interested in more news from Louisiana? We've got you covered! See More Louisiana News
Previous Article If You Have A Child In Public Schools, You Must Watch This Video
Next Article BAYHAM: Mrs. Pelosi, Take Down This Capitol Wall