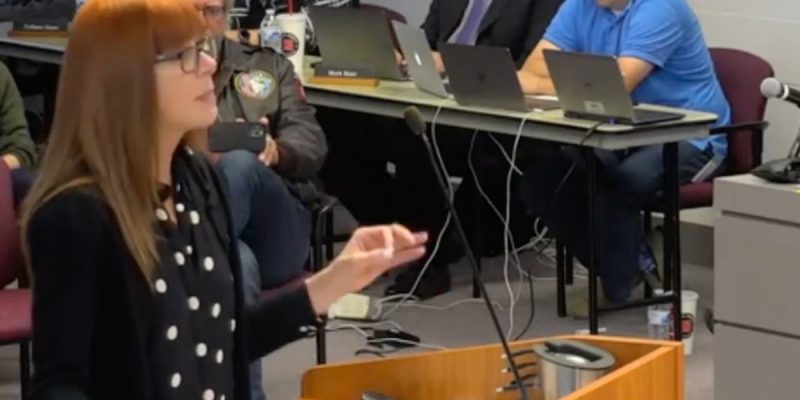 Douglas County, Colorado, population 285,000, is located just south of Denver, and it’s considered to be part of the Denver metropolitan area. Castle Rock, the county seat, is more or less halfway between Denver and Colorado Springs. Based on that location, you would expect it to be a fairly conservative place, and by Colorado standards it is.

And Douglas County’s school board, as is so often the case, is run by the teachers’ unions. Nobody cares about the school board; it’s an entry-level political job which talented people generally don’t have interest in unless they can make money off it.

Or push an ideological agenda.

And there is one in Douglas County, Colorado. Namely, Critical Race Theory, which the school board has now embraced and is pushing on the people of that conservative exurban place.

So at a recent meeting of the school board, one of the parents it allegedly serves took to the podium and very politely dismantled the seven entry-level politicians on the dais. Her name is Deborah Flora, and she’s a radio show host and a member of the concerned parent organization  Parents United America which is taking on the fight against Critical Race Theory in the schools.

You really should watch the three-minute speech she gives, because this is what the fight looks like.

Flora mentions an outfit called the Gemini Group, which is a Colorado-based firm which does “diversity training” for government agencies and companies. It’s run by a couple of grifters who have served in Democrat bureaucracies and then cashed out for some real money in government contracting. The more you dig in the rabbit hole that is Critical Race Theory the more outfits like this you find and the more you realize that there is an entire industry gearing up to push this poison.

And while the people involved in it are all trained, committed leftists, they’ve also built a financial stake in filling the ears of students and employees with this poison. Cultural Marxist indoctrination is turning into a Dutch tulip craze of sorts, and the Biden administration is showering local governments with grants to be spent fueling contractors like the Gemini Group.

And nobody on the Republican side even bothered to see it coming. Now it’s here.

This stuff can be fought off, and fairly easily. Your local school board hires contractors, and publishes a list of the contracts according to the law everywhere. When people like this turn up on that list, raise hell about it – because they’ve been hired to design a curriculum of indoctrination for your kids. And anybody on that school board, and particularly any of the Republicans, who voted for that contract, needs to be turned radioactive such that they can never run for anything again.

Of course, in lots of Republican-run states it’s even easier to get rid of Critical Race Theory. You just pass a bill forbidding local school districts from spreading it. The Democrats in the legislature will raise hell, and the local media will misreport the bill as “banning teaching about racism,” but if you have a Republican governor and a Republican legislature, all they need is a bit of fortitude and perhaps a middle finger or two and the problem is solved.

If those elements aren’t present, and if there can’t be enough hell raised in your local school district to put a stop to this poison, then there’s another option even more local parents can exercise.

Which is to get your kids out of government schools. Period. It’s clear the educational establishment in this country can’t be trusted to educate children rather than indoctrinate them, and unless you have some reason – not blind faith, a real reason – to believe your local schools are an exception, you should be getting creative about finding better ways to get your kids an education, whether that means private school, homeschooling, microschools or whatever else.