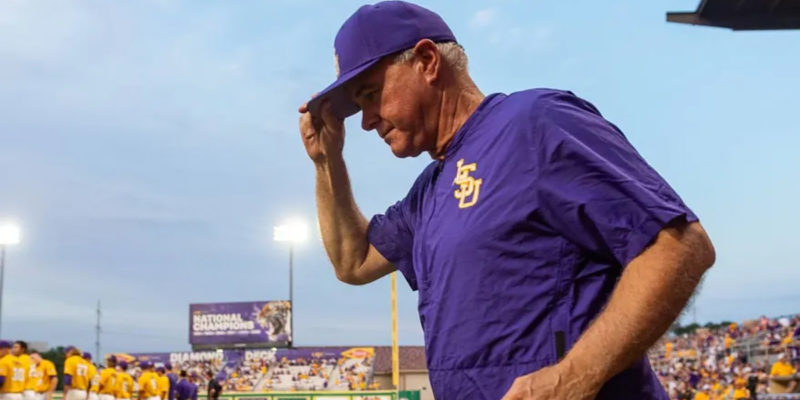 Over the weekend, an era came to an end at LSU, as head baseball coach Paul Mainieri and his Tiger team were put out of the NCAA Super Regional playoffs by a red-hot Tennessee outfit. Almost nothing went right for LSU, as Mainieri’s boys were outclassed by what, at the end of the day, was simply a better ballclub.

That happens sometimes. It’s happened uncharacteristically often over the past couple of years since LSU’s last appearance at the College World Series, which saw them finish as the national runners-up, in 2017.

There was a reason for that. Mainieri has struggled with migraines and neck pain for the past three years and he’s admitted those have made him less of a coach than he used to be. That the Mainieri Era had gotten a little stale since that great run in 2017 is no secret; after spoiling the fans with six straight years of being ranked as a national top-eight seed, LSU has had to fight its way into the NCAA tournament the past three years. And over the past three full seasons he’s 45-45 in SEC play; Mainieri averaged 18 wins per year in league play in the 11 previous ones.

Of course, substandard for Paul Mainieri is pretty darned good for lots of other coaches. LSU finished in an NCAA Super Regional for two of his three final full seasons as a college baseball coach (not counting 2020, of course, since that season was canceled after only 17 games) and in an NCAA Regional final in all three. There are good coaches at other schools who might be serious candidates for Mainieri’s job whose achievements don’t exceed what he’s done in the twilight of his career.

The man is only one of five coaches to manage 1,500 career wins and a national championship, after all. That’s a Hall of Fame career, and Mainieri is rightly a Hall of Fame coach.

And he’s given LSU 15 very good years, despite laboring in the shadow of the college game’s all-time greatest coach Skip Bertman. At LSU Mainieri finishes with 641 wins, 283 losses and three ties, a winning percentage of .693. Overall, counting his previous head coaching stops at St. Thomas, Air Force and Notre Dame, he finishes with a record of 1,505-775-8 (.659). At LSU, not counting the aborted 2020 season, Mainieri’s average season record has been 45-20, with 12 of 14 years going to a regional, nine of 14 seasons ending in a super regional and five of those 14 ending in Omaha.

It’s easy to lose sight of how rare the air around Mainieri really is considering he’s at LSU, which for a long time has been considered the most prestigious program in all of college baseball. Is that still true despite the Tigers not having won a title since 2009?

It’s debatable, as Arkansas, Vanderbilt and others can make credible claims. But LSU is still clearly a top-tier program thanks to Mainieri’s efforts. And he turns over to his as-yet-unnamed successor a program in good shape, with lots of young talent, a recruiting class currently ranked No. 3 in the nation heading into the major league draft, a large and still-engaged fan base and good relationships with all the most important stakeholders both locally and around the country.

It’s been a great run. What happened this weekend, when LSU – a regional three-seed playing with house money against the national No. 3 seed – ran into a better team, doesn’t change that.

Thanks, Coach, for all you’ve done. And we wish you a happy and enjoyable retirement. You’ve earned it.

Interested in more news from Louisiana? We've got you covered! See More Louisiana News
Previous Article BAYHAM: The Most Amazing Republican I Never Met
Next Article APPEL: Louisiana’s Leadership Is Stuck In Neutral, And Will Be Until We Change