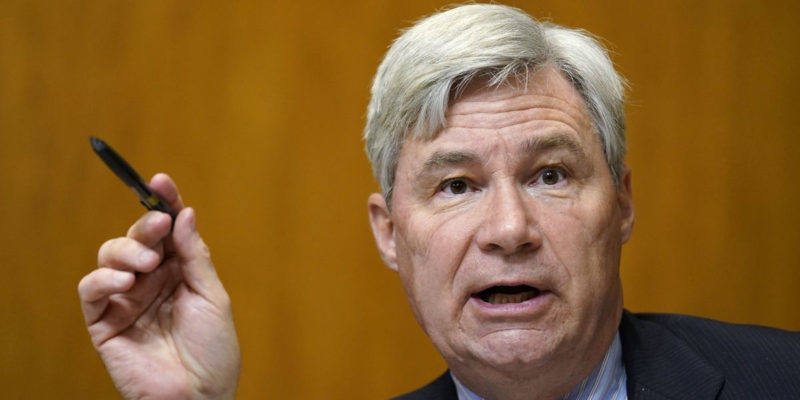 This is the kind of story that we would normally feast on, and its perpetrator is one of the most punchable douchebags in all of American politics. If you can’t dislike Sheldon Whitehouse, you obviously don’t know Sheldon Whitehouse.

GoLocalProv.com News Editor Kate Nagle finally caught up with U.S. Senator Sheldon Whitehouse (D-RI) to ask him about his family’s membership in the exclusive and all-white Bailey’s Beach Club.

In 2006, when Whitehouse ran for the United States Senate, he reportedly promised to quit his memberships in Bailey’s, as well as the all-male, all-white Bellevue Avenue Reading Room.

However, eleven years later, a GoLocal investigation has uncovered that Whitehouse has consolidated his ownership with his wife in Bailey’s, one of America’s oldest and most exclusive beach clubs.

After weeks of refusing to answer GoLocal’s questions about his membership in Bailey’s — Nagle caught up with Whitehouse attending an event in Newport.

“I think it would be nice if they (Bailey’s Beach Club) changed a little bit, but it’s not my position,” Whitehouse told Nagle.

When asked if he would pressure the club to push for diversity at the all-white club], Whitehouse said, “I will take that up privately.” He then told Nagle he had no further comment and walked away.

If you weren’t familiar with Whitehouse’s douchery before the Brett Kavanaugh ordeal, you certainly were after the fact…

Wonder what kind of white-boy antics they get up to at Bailey’s Beach Club.

Whitehouse getting lit up for his exclusive hangouts is all great fun, and yes – the conservative blogosphere is letting him have both barrels for it right now. I don’t begrudge them that by any means. He deserves it.

But here’s the thing – freedom of association is more important than Sheldon Whitehouse, douchebag that he is. If the woke mob were to descend on Whitehouse with such fury that he were to be forced from office, which by the way is absolutely not going to happen, all that would mean is some other Democrat douchebag would replace him. He’s from Rhode Island, after all, which is a pretty monolithically Democrat state, and you might even end up with somebody worse than Whitehouse.

And while it’s very nice seeing a douchebag like Sheldon Whitehouse hoisted on any petard, whether one of his own making or not, there’s a price here I’m not sure I want to pay.

Because the fact is that it’s nobody’s damned business whether Sheldon Whitehouse and his wife are members of some honky beach club that doesn’t let in blacks, or Jews, or Afghans or whatever. Should that club let non-white people in? Yeah, though let’s see a specific example of somebody who got excluded and was qualified and actually wanted to join.

Presumably there are other people in that club who aren’t the douchebag that Sheldon Whitehouse is, and those people are now relatively likely to have their lives upended for having joined the place.

It’s supposed to be pretty cool to have a U.S. Senator as one of your club members, but the guess here is it isn’t very cool for those people right now.

And if it’s legitimate to hound Sheldon Whitehouse for what beach club he’s a member of, then it’ll be legitimate to hound those other members. Then you can hound people for being members of other clubs we decide we don’t like despite the fact those clubs are just for recreation.

And all of a sudden there’s no more freedom of association left, and it was folks on the Right who were just as responsible as the idiots on the Left for making that happen.

I recognize the game here. I get it. This is about making the Left play by their own hideous rules, and exposing their double standards is part and parcel of delegitimizing them so their cultural aggressions lose their power. I’ve been on board with that, and I guess I still am.

But I might be changing on that a little.

The problem is that the Left doesn’t give a tinker’s damn about the fact all their standards are double. They never have. There are no bounds to their hypocrisy, just like there are no limits to their cultural and political aggressions. You can try to shame Sheldon Whitehouse over his beach club, and he’ll shrug and smile. He knows he’s a douchebag. He doesn’t care. And political power is to him like a flame is to a moth – he won’t give it up no matter what.

All of these woke aggressions work against Republicans and conservatives. They don’t work on the Sheldon Whitehouses of the world. You saw how low he’ll go when he went on that fishing expedition into Kavanaugh’s yearbook trying to expose him as a drunk on national television; do you really think he cares that people think he’s a racist because his beach club discriminates against blacks?

Sheldon Whitehouse knows he won’t lose the black vote over this. What are they going to do, vote Republican? His political party does nothing but call Republicans racist all day. He has this covered.

What this means is we can push the shaming of Sheldon Whitehouse all day long and get nowhere with it. All we’re doing is making it more and more acceptable to attack people based on what organizations they join and who they hang out with, and we’re just making life a little bit worse along the way.

We ought to remember that before we all jump on this story and turn it into a massive outrage. There has to be another way to expose what a douchebag Sheldon Whitehouse is.