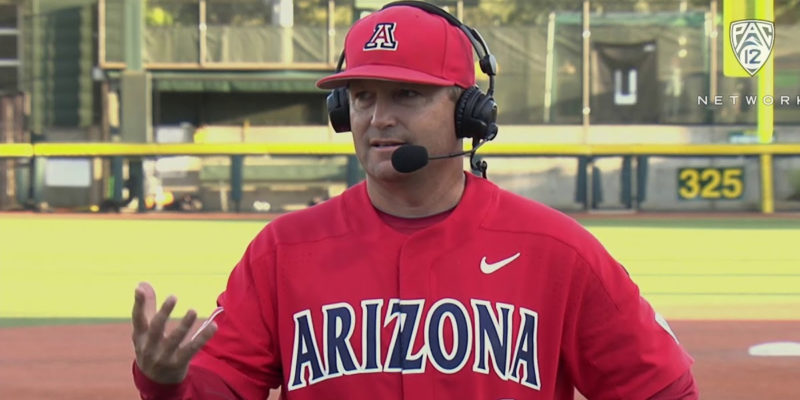 Back when Curley Hallman was the coach of the LSU football team, he had a running back named Jay Johnson. He was pretty good, though the team he was on was beyond terrible. Johnson led LSU in rushing in 1993 with 558 yards and six touchdowns on 106 carries, and then he was gone, sent packing due to some disciplinary action or other.

We mention this bit of ancient trivia because it’s inevitable someone else will, and also because the name Jay Johnson is now destined to be a lot more well-known among Tiger fans – and particularly those too young to suffer through the Hallman years.

That’s because another Jay Johnson, this one who most recently coached the Arizona Wildcats to a Pac-12 season title and a College World Series appearance, is apparently set to succeed Paul Mainieri as LSU’s next baseball coach.

What’s LSU getting in Johnson? We’ve mentioned him as a candidate in a couple of previous posts on the LSU baseball opening.

Johnson is headed to Omaha, having knocked Bianco’s Rebels out of an NCAA Super Regional on Sunday. Arizona is the national #5 seed this year, so it was no fluke that the Wildcats sent Ole Miss packing. They’re 45-16 so far this year, including 21-9 in the Pac-12; Arizona won the league this year.

What’s interesting about Johnson is this isn’t his first trip to Omaha. He was there in 2016, his first year. Arizona went 49-24 that season, and finished as the national runner-up to eventual champion Coastal Carolina – a team LSU fans would remember, since CCU went through the Baton Rouge super regional that year. In the years that followed Johnson had Arizona competitive, but not prominent – they were 38-21 and made a regional in 2017, they were 34-22 and just missed one in 2018, and in 2019 Arizona was 32-24 and fell off the bubble.

It’s an inconsistent record, but it’s what’s possible at Arizona. The history of that program shows it’s as up-and-down as there is in college baseball. Even the great Andy Lopez found himself stuck in that pattern in Tucson. Making Omaha twice in five years, coming off a two-year stint at Nevada when Johnson improved his team from 31-27 in 2014 to 41-15 in 2016, shows that Johnson knows what he’s doing. He looks like a real diamond in the rough. And he’s only 44 years old; the best years of Johnson’s coaching career are well ahead of him.

And here was the other.

We mentioned Johnson in a post last week about the LSU job as an out-of-the-box thought for Mainieri’s replacement when Bianco’s name was the center of discussion, and the rumor mill and message board conversation has seen increasing buzz about his candidacy for the job. Johnson’s Wildcats took a tough 7-6 loss on a 12th inning walkoff single against Vanderbilt Saturday, in a game where his team went largely toe to toe against the defending national champions. They clearly belong in Omaha, something they proved by clobbering Ole Miss in the Super Regional (Arizona earned the trip to Omaha in a 16-3 blowout).

This is the second CWS journey in five years for Johnson at Arizona. His first year in Tucson, which was in 2016, the Wildcats were 49-24 and ended the season as the national runner-up to Coastal Carolina. But in 2017, Arizona was 38-21 and finished in a regional, and in 2018 (34-22) and 2019 (32-24), Arizona just missed the NCAA tournament. That indicated a downward trajectory rather than what one might expect, until this year’s huge bounceback. Arizona is the No. 5 national seed and sits at 45-17 following the Vanderbilt loss.

Johnson is a terrific postseason coach. He’s 17-8 in postseason play for his career, a good number for a 44-year old head coach. Arizona isn’t his first stop, as he was 31-27 and then 41-15 in two years at Nevada from 2014-15, earning Mountain West Coach of the Year honors in 2015. Prior to that he was an assistant at San Diego from 2006-13, during which time the Toreros won their conference three times and appeared in four regionals. Johnson spearheaded the nation’s best recruiting class in 2010 at San Diego (which is an incredible feat in itself), including current major league star Kris Bryant. And while the knock on Johnson would be that he’s a West Coast guy, something which has generated so-so results for other SEC baseball programs at times, if you watch Arizona play they don’t look or feel like a West Coast team.

A couple of other things to add to that.

First, the big knock some will have on Johnson is that sandwiched in between the College World Series appearances in 2016 and this year there were three full seasons which weren’t all that great. The 2017 team went to a regional, which is OK, but in 2018 and 2019 Arizona was on the NCAA bubble and didn’t end up making the tournament. That would indicate a downward slide from that first big year until Johnson righted things this season.

But a couple of things factor into that. First, the 2016 team was full of junior-college players Johnson’s predecessor Andy Lopez had recruited before he retired, and Arizona was loaded up that season. Johnson coached them all the way to a No. 2 national finish, but the bottom was going to drop out of the program with all the kids graduating; that was inevitable. Instead of trying to retool with more quick-fix junior college transfers, Johnson went for stability by hitting the high schools, and for a couple of years he had a young team which took its lumps. Arizona was still more or less a .500 team in the Pac-12, but it was this year when the rebuild paid off.

Second, Johnson’s pattern was pretty much what you can do at Arizona. Remember, Lopez is a Hall of Fame type coach who took four different programs to the College World Series (Cal State-Dominguez Hills, Pepperdine, Florida and Arizona) and won over 1100 games and national titles at both Pepperdine and Arizona. But if you look at Lopez’ year-by-year records there, you won’t see too much more than what Johnson is doing. In 14 seasons Lopez was in regionals eight times, super regionals three times, the CWS twice and a national champion once. He had a winning percentage of .602 at Arizona, including a .504 record in conference play. Johnson, by contrast, has coached five full years there, making three regionals, two super regionals, two trips to Omaha and one trip to the final series. His winning percentage there is .646, and in conference play it’s .550.

What we really, really like about Johnson is that his team plays nothing like the classic West Coast small-ball team. Arizona was fourth in the nation in team batting average this year; they hit an incredible .325. They led the country in doubles with 145, and in triples with 30. They were 32nd with 70 home runs, and they led the country with 537 runs in 63 games – that’s 8.5 a game.

It isn’t quite gorilla ball, but it’ll do. Arizona routinely sent up a batting order where all nine hitters were batting over .300. LSU fans remember when that was part of its brand, but it’s been some time since that was the case.

Johnson might not be the splashy hire that, say, Tim Corbin from Vanderbilt would be, and there were people who fell in love with Tennessee’s Tony Vitello as a candidate. A rumor that LSU had offered Vitello the job at a salary topping $2 million a year – that doesn’t now look true, and frankly Vitello’s demise in Omaha was a bit less graceful than Johnson’s; there is a real question about whether the Cobra Kai persona of Tennessee under Vitello is a fit for where LSU is now.

So what are the prospects for the new coach? Well, LSU is likely to have a highly competitive club next year assuming there isn’t a mass exodus of players with eligibility remaining. Mainieri’s recruiting class for 2021 was rated tops in the nation, and with bats like Dylan Crews and Tre Morgan that wasn’t an anomaly. And the 2022 class is currently rated #3.

Between players expected to return and the new recruits likely to escape the draft, there should be some high-level competition for starting jobs and it’s likely the Tigers will have some solid, or even star-quality, players at every position with the possible exception of catcher. There’s pitching depth, though it’s young – virtually the entire staff will be freshmen or sophomores, with the exception of junior left-hander James Hasty and three JC transfer signees. A big question will be whether any of the young pitchers can step forward and emerge as top-level ace-quality arms, and right now that’s in doubt. Javen Coleman, Garrett Edwards and Ty Floyd have shown flashes of having ace-quality stuff, but none have yet been consistent enough performers to project as Friday or Saturday starters yet. Among the signees there are three potential aces in high schoolers Ben Kudma, Cole Lansville and Blake Selvidge, but LSU will have to wait on the draft to see if they’ll make it to campus.

Johnson will want to hit the transfer market to fill some holes on the mound. But if he can coach up the bats like he’s done at Arizona, LSU might be an offensive juggernaut. The talent is there.

It’s an interesting hire, and one which should generate a lot of optimism. LSU fans are finicky, and Johnson might have some work to do convincing them he’s worthy of the keys to what’s seen as a Maserati in Baton Rouge, but baseball people know this is a quality hire.

Interested in more news from Louisiana? We've got you covered! See More Louisiana News
Previous Article You Might Notice We’re Less And Less Active On Facebook. Here’s Why.
Next Article CROUERE: Republican Grassroots Are Fed Up And Organizing For An Override Session