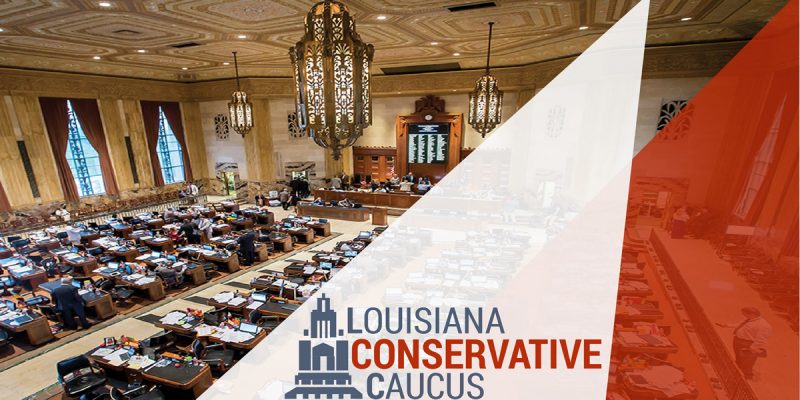 All last week it’s been pretty confusing to watch efforts in the Louisiana Senate to make 0.45 cents of the 4.45-cent state sales tax, which are scheduled to sunset in 2025, permanent. That’s been going on for days, ever since Sen. Rick Ward was able to graft an amendment onto a bill which would apply a sales tax to medical marijuana that would make the 0.45 cents permanent and then direct at least most of the money to road construction.

At the legislature they’re all about building roads. They’re not really all about raising taxes. At least, the newly-founded Louisiana Conservative Caucus, which counts 41 House members in its ranks, a number large enough to block any tax increase, has said they’re not on board with tax hikes.

And yet after the Conservative Caucus came out against the effort to make that sales tax increase permanent, there was still lots of effort made to pass the as-amended version of House Bill 514. The president of the Senate, Page Cortez, even showed up at the bill’s hearing in the Senate Finance Committee last week in order to help move the bill. That came just after the Conservative Caucus had come out publicly in opposition.

Meaning there was no way to pass the bill in the form it was currently in. And yet efforts to pass it in the Senate continued.

Until yesterday, that is. Yesterday there was resolution, and it turns out the Conservative Caucus is now the most powerful player at the Louisiana capitol.

An effort to make permanent a temporary sales tax to fund road construction died Monday in the Louisiana Senate, which chose instead to redirect a separate tax for the same purpose.

House Bill 514 started as a proposal to tax medical marijuana. Sen. Rick Ward, a Port Allen Republican, proposed a successful amendment to make permanent a 0.45% state sales tax that is scheduled to expire in 2025 and redirect the money to a fund dedicated to construction and maintenance of transportation infrastructure.

The amendment, however, appeared to face long odds in the House. Enough conservatives had announced their opposition to block passage, and many liberals objected to relying on a “regressive” tax that is most burdensome for the lowest-income consumers.

Senators essentially gutted the bill Monday and replaced it with a new proposal to redirect most of the state sales taxes on automobile sales and leases from the state general fund to road construction and maintenance. Beginning with the 2022-2023 fiscal year, 25% of the proceeds would be redirected, followed by 50% the year after and 75% for each year thereafter.

The bill now is very similar to House Bill 511, which the Senate Finance Committee advanced Sunday with the understanding it was unlikely to survive in its current form. HB 511 would have ramped up over 10 years until all of the revenue was dedicated to transportation.

“I think this is a good middle ground,” Ward said.

Ward said 75% of the auto tax revenue would equate to about $375 million per year for roads and bridges. Unlike the state’s gas tax, which has not been adjusted in three decades, auto sales taxes naturally will rise with inflation, he said.

Redirecting those tax dollars on vehicle sales toward the roads has been the idea Rep. Jack McFarland, who is the chair of the Conservative Caucus, has been pushing all along. It was part of MacFarland’s initial proposal which made a lot of noise before the session because it had originally involved raising the state’s gasoline tax. McFarland dumped that proposed tax hike when it was clear it lacked support, but held on to the rest of the proposal.

And the Conservative Caucus had stated it supported McFarland’s proposal to redirect the vehicle tax dollars to the roads when it rejected the idea of making the 0.45 cents permanent.

In plainer English and to drag all this out of the weeds, the Conservative Caucus has apparently won the day on taxes and roads. And this was one of the key issues to be handled during this legislative session.

Last week we talked about how this issue potentially set up a game of chicken between the conservatives and the leadership in the House. Well, that didn’t materialize because the leadership backed down.

It will be interesting to see if the Conservative Caucus seeks to build on this win by making other demands or pushing other policy priorities. They seem to have some momentum now.