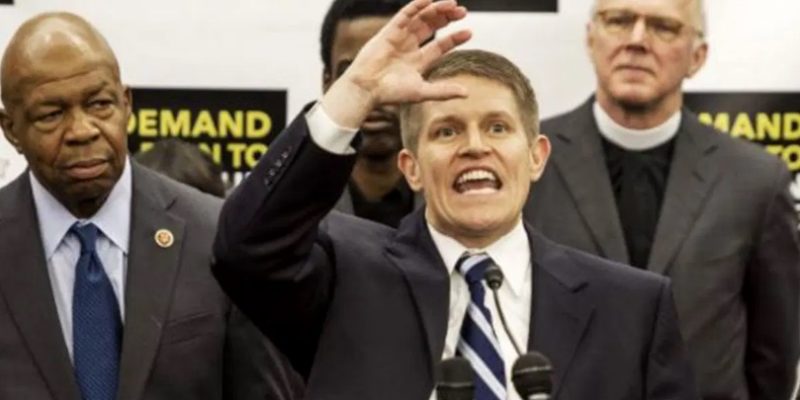 A handful of Senate votes may be all that stands in the way of a “radical” and “divisive” gun control activist becoming head of the federal agency that regulates firearms.
The U.S. Senate Judiciary Committee failed to stop longtime gun control lobbyist and former ATF agent David Chipman’s nomination to lead the Bureau of Alcohol, Tobacco, Firearms, and Explosives (ATF). The 11-11 party-line vote took place on on Thursday.
The deadlock allows U.S. Sen. Chuck Schumer to bring Chipman’s nomination to the U.S Senate floor for consideration in the days ahead — in a chamber split between 50 Republicans, 48 Democrats, and two independents who often caucus with Democrats. Vice President Kamala Harris can cast a tie-breaking vote.
President Joe Biden has strongly advocated for the controversial nominee, who shares the Biden Administration’s goal of resurrecting the Assault Weapons Ban that would affect the approximately 5 million Americans who own semi-autos such as AR-15s.
Chipman, hailed by fellow gun control advocate and mass shooting victim (and employer) U.S. Rep. Gabrielle Giffords as “the perfect choice,” is not inspiring much confidence across the aisle and among moderate Democrats (see analysis below).
While accounts that he was physically present at the Branch Davidian compound raid in Waco in 1992 turned out to be untrue, other, actual embarrassing details have surfaced, such as reports of Chipman losing his the firearm he carried while on-duty.
The NRA-ILA is calling for constituents to call their U.S. Senators and urge them to deny the nomination:
“David Chipman spent the last 10 years unapologetically lobbying for gun control on Capitol Hill and getting paid to do Michael Bloomberg’s bidding,” a press release from NRA-ILA stated “He supports extreme, unconstitutional restrictions on the right to keep and bear arms, and [Thursday’s] party-line vote in the U.S. Senate Judiciary Committee affirms the reality that he is unfit to lead ATF.”
U.S. Rep. Chip Roy of Texas had one of the stronger statements in reaction to the Senate’s vote, calling Biden’s nomination of Chipman “utter contempt for the Second Amendment rights of Americans.”
“[On Wednesday], the President unveiled his gun control strategy that Mr. Chipman will lead, seeking to seize guns and mocking the inherent right of self-defense,” Roy said. “Mr. Chipman is a gun control radical who favors banning guns that every day Americans keep in their homes for sport and self-defense.  The right to keep and bear arms shall not be infringed – anyone who does not understand that has no business running the ATF.  Every Senator that supports the fundamental right to self-defense codified in the Second Amendment should vote against this dangerous nominee.”
ANALYSIS: All eyes are now on Democrats likely to break ranks with their caucus and urge Biden to go fishing for another nominee.
Rural Democrats, particularly U.S. Sen. Joe Manchin of West Virginia, may wish to consider that Chipman could with a stroke of a pen render thousands of his constituents into potential felons overnight. Manchin, who won a razor-thin victory with 49.6% of West Virginian voters, represents a state in which nearly 60% of residents have a firearm — No. 5 in the nation for gun ownership.  Accordingly, he has scored highly on gun rights groups scorecards — a status he may wish to hang onto.
Manchin has a recent history of opposing the Biden Administration, particularly having voted against the president’s pick to lead the Office of Management and Budget, Neera Tanden (who later withdrew after facing the reality that the Senate is so narrowly divided). The situation with Tanden may repeat itself if Manchin and others in gun-friendly states vote with Republicans to deny the nomination — and no Republicans break ranks to support him.
Republicans so far are in lockstep in opposing Chipman. Even U.S. Sen. Susan Collins of Maine, typically a more moderate voice in the chamber, has called Chipman an “unusually divisive” candidate for the job.
Other swing votes could come from Democratic U.S. Sen. Kyrsten Sinema of Arizona, with a record of voting with several GOP priorities, and U.S. Sen. Jon Tester who, despite his liberal voting record, represents gun-friendly Montana.
U.S. Sen. Bob Casey of Pennsylvania is also known as a swing-voter who votes with Republicans on anti-abortion legislation, but has over the past five years shifted his position to strongly in favor of background checks and other House gun control measures.
Could Chipman be a bridge too far for even Casey and other centrist Democrats? If not, it may be Vice President Harris who ultimately decides our next ATF director.
This story originally appeared in International Sportsman.
Interested in more national news? We've got you covered! See More National News
Previous Article BAYHAM: Republican Leges Owe Their Voters A Veto Session
Next Article The Score Keeps Mounting From Cassidy’s Washington Generals Performance