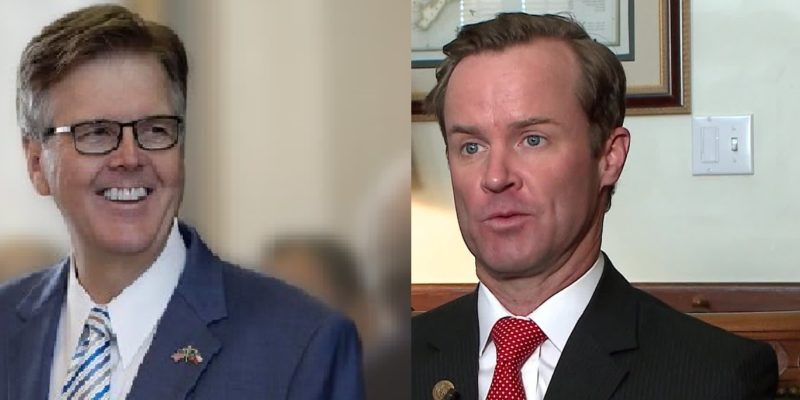 As conservatives wait for Gov. Greg Abbott to call a special session over the Sen. Bryan Hughes’s election integrity bill SB7, Lt. Gov. Dan Patrick took to the radio and blasted Speaker of the House Dade Phelan over the Democrat walkout on the last day of the Regular Legislative Session killing the bill.

In his interview on WBAP-AM broadcasting out of the Dallas-Fort Worth Metroplex, Patrick stated that Phalen knew the Democrats were going to stage a walkout to break quorum at the 11th hour and not only did nothing to stop it, he apparently intentionally let it happen.

Patrick started out the interview stating he is not a fan of inter-Republican feuding, but also stated that Phalen did not want SB7 to pass because he needed Democrat support to remain speaker.  Patrick emphasized that the original Senate version of the bill was passed on April 12th, and that it should not have taken 45 additional days to have the bill pass through The House and complete the conference committee process comparing it to “an express lane versus a slow boat to China.”

Patrick then directly stated there were rumors that the Democrats were going to walk out to break quorum and that both the Lt Governor in the Senate and the Speaker in the House have the power to lock the doors to prevent members from leaving along with the power of sending out State Troopers to arrest the truant members to bring them back to the capital.  Reading between the lines, Patrick more or less admitted to locking the doors to prevent Senate Democrats from walking out and that the extra DPS presence during the SB7 conference committee debate was not for potential protestors, but to prevent Democrat Senators from leaving to intentionally break quorum.

Patrick then went on to state that Phelan met with the House Democrats and told them he was not going to lock the chamber doors or send DPS to arrest them if they intentionally left to break the quorum in The House.  Patrick did not hold back with his comments about the Phelan’s management of the House Calendar.

“The Calendar was mismanaged. I hate to say on purpose, but there is a pattern here.” Patrick went on to state using the example of the House Leadership killing bills by the clock that would have prevented boys from playing in girls sports.  SB12 also by Sen Hughes to prevent Big Tech censorship never even got a hearing in the House.  Senates bills to ban taxpayer funded lobbying also died by the clock in the House.

Patrick brought up another example of the Democrats twisting Phelan’s arm to prevent conservative legislation from passing regarding two bills that would have banned transgender surgery on minors.  The first bill wasn’t even granted a hearing in the House, the Second bill had massive amount of public support, so instead of having a vote on it, House Leadership decided to take the second to last weekend off of the session to once again kill a conservative bill by the clock.   Patrick then directly said that Phelan acted like a Democrat Speaker by condoning a quorum breaking walkout and that Patrick asked Gov Abbott to add all these bills back to the call for the special session with the emphasis, “these bills will not be softened up.”

Patrick then defended SB7 stating, “It was not voter suppression,”  and emphasized if a citizen of Texas is legally allowed to vote in a specific district, SB7 did nothing to prevent these legal votes from being cast.  What the bill does is ban types of voting options that are susceptible to fraud such as 24 hour drive up voting which could not be reconciled in Harris County going back to 2018.

When asked should Dade Phelan be replaced, Patrick first stated he “did not get involved in House Politics” and compared the Lt. Governor position getting elected by Texans in a statewide election verus the Speaker being elected by the 150 members of the House.  Patrick then went on to say Phelan didn’t have enough Republicans in the House and needed 15 or 20 Democrats to vote for him and that Phelan either needed to water down or outright kill strong conservative bills in order to maintain his Democrat support and that if these Conservative Bills remained as strong as they were coming out of the Senate, he’d lose the Support of those Democrats that voted for him and he would not be Speaker any longer.  Patrick then reiterated that this is a House issue and that he’s staying out of it, but that people that are emailing these questions “have a right to know what happened.”

Patrick then made a huge point of House Republican Leadership using the rules against themselves in a defeatist type way.  Patrick contrasted the Senate with the House in that the Senate was efficient and deliberate with the way it conducted business, even being able to suspend the rules to prevent death by the clock.  These are previsions that are allowed and used by the Democrats all the time.  Reading between the lines Patrick put a shot across the bow at Republicans that use the rules as an excuse for not fighting to win which contrasts with even  President Donald Trump’s former Council Jenna Ellis on her latest interview on Dr. Sebastian Gorka’s Radio Program.  To use a Star Trek analogy, Patrick feels Republicans need to stop acting like Captain Piccard and start acting like Captain Sisko.

Patrick finished up the interview emphasizing that all the conservative bills that were killed by the clock need to be put on the call for the special session and emphasized the accomplishments for the session such as the passage of constitutional carry of handguns as well as bans on critical race theory.  Patrick emphasized that he was able to get the Constitutional Carry Bill through The Senate picking up the necessary votes in less than two weeks.  Patrick went on to contrast the slow walking by the house and said specifically that The House ground to a halt in the last two weeks of session and that “taking two days off in the last six days was recipe for disaster.”  Patrick specifically called out Phelan stating that if he didn’t want the bill to come up for a vote he should have been direct about it, not play games with the clock because the Republican members of the House according to Patrick,, would have voted yes for the conservative legislation.

Patrick concluded the interview calling himself the luckiest guy and that the Lt Governor of Texas is the best job in politics outside being President of the United States.  He briefly described that according to the Texas Constitution he’s the most powerful office in Texas Government laying the groundwork for his re-election campaign that he formally announced a few days later.  The takeaway from the interview was how frank Lt. Governor Patrick was directing blame at Texas House Speaker Phelan.  Usually politicians sidestep direct attacks on those of their same party.  Many speculate that this could be just self preservation for his re-election bid in 2022 especially since he’s not directing the same criticism to Gov. Abbott’s apparent lack of leadership.  We’ll know in the coming weeks with the impending special session if this is just political rhetoric or something more substantial.

Interested in more news from Texas? We've got you covered! See More Texas News
Previous Article Allen West To Radio Host: ‘The More Important Job Is To Be A Governor …’
Next Article CROUERE: “Calamity Kamala” Is An International Laughingstock