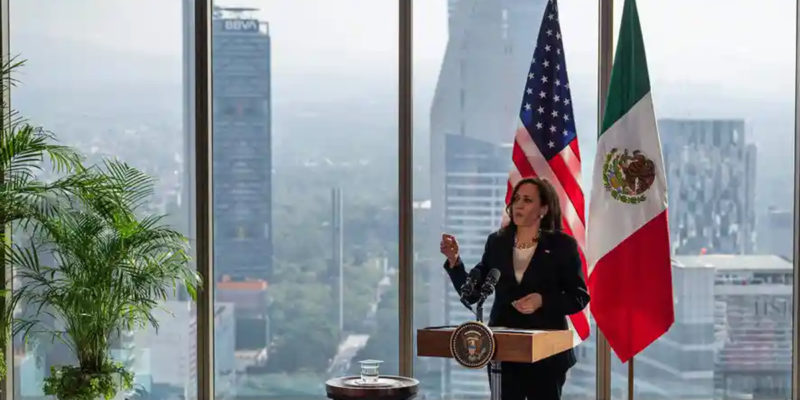 Tucker Carlson, who has abjectly eviscerated Vice President Kamala Harris all week, isn’t the only one letting her have it. After a week like this, the men and women behind the Joe Biden curtain are probably scratching their heads and wondering what they’re going to do when Biden’s cognitive state becomes so deficient that they can’t prop him up anymore.

Because America isn’t going to put up with a President Kamala Harris for very long. Not if this week’s cataclysmic trip to Guatemala is any indication of what she can do.

Everything about Harris this week has been wrong. She began it with a bizarre interview with NBC’s Lester Holt in which she repetitiously claimed, “We’ve been to the border,” only to be interrupted when Holt pointed out that “You haven’t been to the border.” She then dismissed that by saying she hasn’t been to Europe, either — which didn’t convey a message that going to the border isn’t important but rather that she comes from a provincial and incomplete worldview and isn’t fit to serve as a world leader.

Remember, this is the woman Biden’s handlers put in charge of the border, and she still hasn’t been there.

Instead, she leapfrogged the border and went to Guatemala. She said she was going there to address the “root causes” of the cascade of illegal immigrants coming through our southern border.

Everybody knows what the root causes are. The countries to the south of our border are poorer, less safe, more corrupt, and less free than we are, and the administration Harris serves has signaled to the people living in those countries that our border is wide open and that they’ll be taken care of with free health care and welfare payments if they come here.

Put those things together and we’re now being invaded by the world’s poor, which is exactly what the American Left wants. They think it’s a matter of time before they can make all those illegal immigrants Democrat voters and essentially replace the current electorate with one that likes them better.

Harris thinks the people who run those countries in Central America are as unsophisticated as those prospective new Democrat voters swimming across the Rio Grande. But they proved her wrong this week. She was greeted with protesters and politically incorrect “Trump Won” signs when she landed in Guatemala City, and Guatemala’s president Alejandro Giammattei told Fox News’ Sara Carter in an interview that “this border crisis is one of your own making. Don’t put the blame on us.”

Giammattei understands that if you guard your border people won’t come across it, and if you don’t, they will. He’s a man without much time for equine scatology from Willie Brown’s old mistress.

Then Sen. Tom Cotton (R-Ark.), who has gotten very good at dropping truth bombs on the administration, really let her have it in a Laura Ingraham Show appearance.

“You know, Laura, Kamala Harris didn’t have to go all the way to Guatemala and Mexico to find the root causes of this border crisis because they’re not there,” he said. “The root causes are in the White House.”

The Left loves to talk about “root causes” rather than address problems. It’s what they do with crime, for example — claim you’re addressing the “root causes” of crime when those aren’t complicated — some people think it’s easier to be a criminal than a law-abiding citizen, usually because they see left-wing policies proving out the case, and so they act accordingly.

And the illegal aliens see that it’s easier to come to America illegally than wait their turn as immigrants or to fight to make their home country livable, and so they act accordingly.

You don’t have to be a genius to see this. You just have to be a bit smarter than a moron. Kamala Harris thinks everyone is a moron but her, and that’s very off-putting whether you’re a Guatemalan pol or a swing-state American voter. The guess here is in a few years she’ll be talking about the “root causes” of President DeSantis or President Trump’s election in 2024, and those will involve lots of excuses.

Of course, Carlson’s evisceration of the Vice-President continued on Wednesday night with a solid takedown…

The brickbats landing on Harris have really been breathtaking.

She’s creating them, by the way. An example…

Kamala Harris snaps at reporter for asking when she will go to the border, won’t say when she will visit pic.twitter.com/vysmUvjZfR

And the left-wing media is working even harder than ever to make Kamala Harris viable. For example, Slate is now blaming Joe Biden for Harris’ face-plant…

Slate published an article Thursday indicating President Joe Biden wants his Vice President to fail by putting her in charge of the border crisis and election takeover legislation, which are quickly becoming losing issues for the administration.

Slatewrote, “If you look at the assignments Kamala Harris has been given during her tenure as vice president, it’s pretty easy to think that she’s getting the short end of the political stick.”

“First, she was tasked with taking on immigration: After mostly staying in D.C. during the pandemic, Harris is on her first international trip, a visit aimed at helping Guatemala and Mexico stem migration,” the article continues. “She’s also been assigned to help protect voting rights that are under attack across the country. It’s hard to know what to call her job, why she’s being saddled with the tasks she’s been saddled with, and what this may portend for her future political prospects.”

The observation is backed up by evidence from the southern border crisis, with border crossings “at a 21-year high, more than 180,000 in May.” The administration seems to have no real solutions to the problem after revoking the former administration’s border security policies, such as ending the “Remain in Mexico” policy.

Vice President Kamala Harris is in charge of forwarding legislation that would federalize local elections. The legislation is stalled in the Senate due to Democrat Senators keeping the filibuster in place to block partisan measures. Legislation in the Senate needs 60 votes to pass, and the Democrat-led Senate is short of five to ten votes, depending on how many Republicans vote with the Democrats.

Even Sky News Australia let her have it…

The spectacle of a politician in over her head was painful to watch. We should take no joy in watching our vice president, the next person in line for the presidency should anything happen to Joe Biden, flail about like a fish out of water. It was an embarrassment for the United States and a PR headache for the White House.

An op-ed in the Chicago Tribune summed it up: “Kamala Harris Interview Leads to Wish For Biden Longevity.”

The purpose of the vice president’s trip was planned ostensibly to get her feet wet in foreign policy. Send her to Guatemala and Honduras — no place really important — and have her get a feel for the job, the president’s aides must have been thinking.

Instead, she bollixed it up royally.

White House officials are said to be “perplexed” at Harris’s performance in front of the media. After all, she’s supposed to be a seasoned politician. Surely she should have done better with the media. Her response to the question of why she hasn’t visited the border yet — “I haven’t been to Europe, either” — was so bad that even Lester Holt, the NBC reporter interviewing her, was shocked.