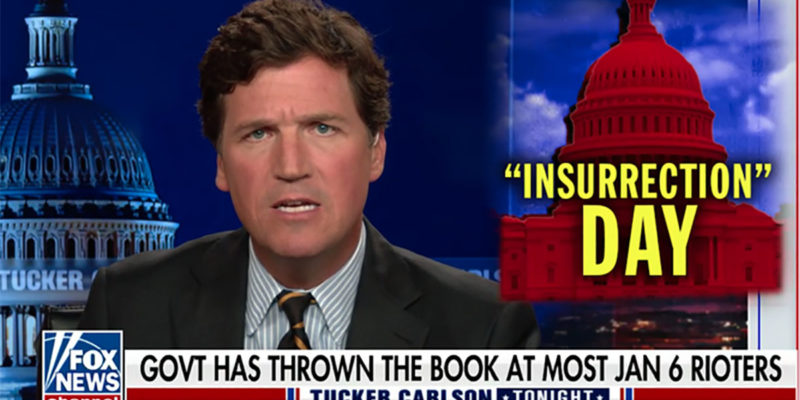 What’s going on this week on Tucker Carlson’s Fox News show is important, and it deserves the attention of every American who truly cares about what kind of country we’re going to be living in. Carlson has picked up on a report from Revolver.news suggesting that the FBI played a highly substantial role in goading the Jan. 6 protesters into committing behavior which has since been spun up into an “insurrection” for which the Biden administration is deliberately overreacting in order to suppress free speech.

That’s the kind of charge the political establishment and the legacy corporate media would categorize as a “conspiracy theory,” and the basic reflex is to dismiss it because nothing like that can happen in the good old USA.

Except it has happened before. If you know your history you know that arrests and imprisonments of political dissenters, while rarer here than elsewhere, have happened multiple times. Most prominently, for example, Woodrow Wilson had at one time some 175,000 political prisoners in American jails during a radical expansion of federal government power not dissimilar to that which Biden’s handlers are attempting.

And as Carlson notes, the FBI has built a template for precisely the accusation made about its Jan. 6 actions with respect to foreign terrorism. The FBI has been infiltrating and entrapping foreign terrorists, mostly of the jihadist variety, for years, and particularly since 9/11.

Most people would say that’s a good thing, and we wouldn’t call them wrong.

But when those tactics then get turned on “domestic terrorists,” does it change the equation?

That’s a good question. Again, most people would say that the FBI infiltrating, for example, the Ku Klux Klan so as to make it easy to round up its leaders and active operatives in the event they plan or execute violent or other criminal behavior is probably fine. Or better than fine.

And the FBI has been doing that for years. So much so that it’s become a joke – half the people who show up at a Klan meeting could carpool from the local FBI office.

Infiltration is one thing. Entrapment is something else. Not just because you’re perverting the role of law enforcement, but because you’re creating threats to public safety rather than solving them.

The jihadist attack in Garland, Texas a couple of years back was a good example. It came out in a 60 Minutes report that an FBI agent was actually goading the terrorist gunman to go to Texas and shoot the place up. That’s a bit more involvement than you’d think was a good idea, we expect.

Which brings us to Jan. 6. How much goading and entrapment was involved there? We know that there were lots of organizations which openly planned to take part in those protests and which are held in low regard by the political establishment. The Oathkeepers, for example, and the Proud Boys, or the Three Percenters. How many FBI informants and agents embedded themselves with those groups? And how many of them goaded the others to commit crimes at the Capitol?

We think it’s a bit suspicious that no one has been arrested on weapons charges arising from the Jan. 6 event. The political class keeps calling it an “insurrection” and a “terrorist attack,” categorizations they don’t seem very willing to call the Black Lives Matter riots in scores of American cities last year where weapons were definitely present and lives and property were definitely destroyed. But if there were no weapons present at the Capitol on Jan. 6, what kind of “insurrection” is that?

Isn’t an “insurrection” supposed to be an attempt to seize control of the government?

Sure seems that way.  Merriam-Webster thinks that’s what an insurrection is. 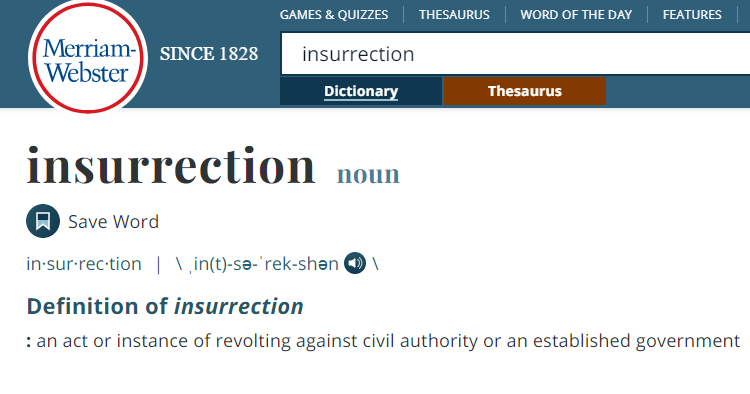 OK, so what kind of insurrection doesn’t bring any weapons to the scene? It would be pretty foreseeable that the Capitol Police would have weapons. How exactly does that insurrection succeed when they’ve got nothing but their fists?

Or were there weapons present? If so, how come none of these people arrested and jailed in connection with Jan. 6 have been charged with carrying guns or knives or other weapons into the building?

Were they not charged because they’re with the FBI?

It’s a question worth asking. Carlson isn’t quite asking that, but he’s asking the related question: how much of what happened on Jan. 6 was ginned up by the FBI through its undercover agents and informants?

The really interesting thing is that when Carlson’s initial foray into this, which happened on Monday night, got out and people started sharing it, Twitter jumped in to suppress it and call it “baseless.”

That was peculiar, because how on earth would Twitter know whether it was “baseless” to suggest an FBI role in maximizing the volume of the Jan. 6 protests in order to entrap people? The whole point is to ask the question and get some answers, and the questions aren’t “baseless” at all. We know the FBI has done this in other contexts, we know the current crew in power has acted in a manner consistent with the behavior some suspect – just consider the recruitment of the insane Russel Honore to “consult” on Capitol security and the erection of a razor-wire wall around the Capitol and the army of National Guardsmen deployed there in a pure show of security theater.

Not to mention the message Twitter inflicted on those viewing the video of Carlson’s Monday segment on Jan. 6 and the FBI declared that informants wouldn’t be charged with crimes.

Which is what Carlson was getting at, and last night he said as much while laying into Twitter…

The big questions here are the ones already asked by Revolver, in that long report referenced above…

We at Revolver News have noticed a pattern from our now months-long investigation into 1/6 — and in particular from our meticulous study of the charging documents related to those indicted. In many cases the unindicted co-conspirators appear to be much more aggressive and egregious participants in the very so-called “conspiracy” serving as the basis for charging those indicted.

The question immediately arises as to why this is the case, and forces us to consider whether certain individuals are being protected from indictment because they were involved in 1/6 as undercover operatives or confidential informants for a federal agency.

Here it is useful to draw a distinction between two discrete categories of participants in the so-called Capitol Siege.

The first category is the group of mostly harmless tourists who walked through already opened doors and already-removed barricades, and at most were guilty of minor trespassing charges and light property offenses. The second group consists of those who were violent with police officers, broke down barricades, smashed windows, belonged to a “militia” group engaged in military-style planning prior to the event, discussed transporting heavy weaponry, and so forth.

Up until now, the overwhelming (perhaps exclusive) share of counter-establishment reporting on 1/6 has focused on absolving the first group. And this is a valuable thing. The notion that these harmless “MAGA moms” wandering around the Capitol were domestic terrorists engaged in an insurrection is absurd. That many of these people are being held in prison, without bail, under harsh conditions, amounts to an unacceptable and outrageous abuse of basic human rights.

However, the possibility that the federal government had undercover operatives or informants involved in the events of 1/6, from its planning to its execution, compels us to turn our attention to the second category of participants.

We are especially interested in the unindicted co-conspirators who belonged to any of the big three “militia groups” — the Oath Keepers, the Proud Boys, and the Three Percenters. Indeed, it is these militia groups whose behavior, statements and planning leading up to and during 1/6 most closely align with the “violent insurrectionist” caricature we hear about in the media, and which the government claims to be going after in its aggressive prosecutions.

If it turns out that an extraordinary percentage of the members of these groups involved in planning and executing the Capitol Siege were federal informants or undercover operatives, the implications would be nothing short of staggering. This would be far worse than the already bad situation of the government knowing about the possibility of violence and doing nothing. Instead, this would imply that elements of the federal government were active instigators in the most egregious and spectacular aspects of 1/6, amounting to a monumental entrapment scheme used as a pretext to imprison otherwise harmless protestors at the Capitol — and in a much larger sense used to frame the entire MAGA movement as potential domestic terrorists.

This is what’s at stake in getting to the bottom of 1/6.