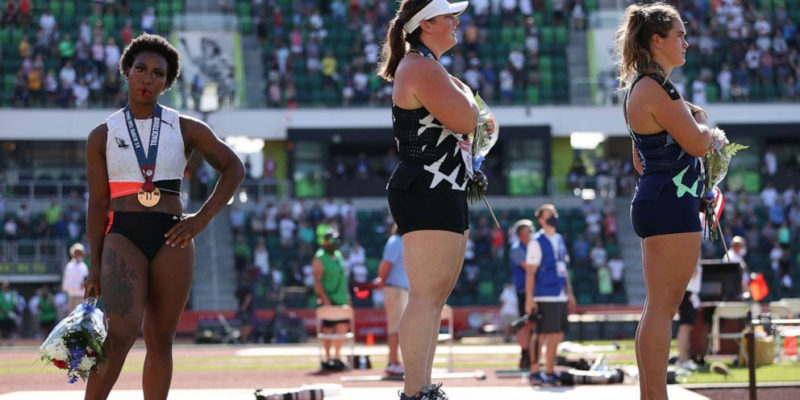 If COVID-19 wasn’t already turning the delayed Tokyo Summer Olympics into a mess, hammer thrower Gwen Berry is seeking to toss national self-loathing into the milieu at the US Olympic Trials held in Eugene, Oregon.

After finishing third and punching her ticket to Japan, Berry stood on the platform and turned her back towards both her fellow female athletes and the United States flag during the scheduled playing of the Star Spangled Banner.

Towards the conclusion of the anthem, Berry awkwardly placed a black t-shirt with the words “activist athlete”  over her head.

Needless to say there was a public backlash over her behavior and Berry responded in characteristic unhinged manner.

Berry claimed she was “issued” and “set up” to be embarrassed by the event organizers and further claimed they were being disrespectful to her by playing the anthem while she was on the podium.

Protesting at sporting events is a relatively new-found calling for Berry, who has competed internationally for a decade .

At the 2016 Olympics in Rio de Janeiro, Berry participated in the games without incident, or for that matter success, placing 14th in the hammer throw and failing to qualify for the final.

At the 2019 Pan American Games in Lima, Berry rebounded and took the top spot.

Berry exploited the medal ceremony to raise her fist at the end of the Star Spangled Banner to protest injustice in America and President Donald Trump and was sanctioned for doing so.

By her own admission, Berry was following the lead of former San Francisco 49ers quarterback Colin Kaepernick, who made protesting fashionable and gave himself a new endeavor as his gridiron career was spiraling as he led his team to a 1-10 record in his final season.

Perhaps Berry’s turn as an athlete activist is an insurance policy to assure her of media relevancy if she once again performs poorly at the Olympics.

Berry mistakenly believes the Olympics is about herself and thus far is succeeding at the task with the support of the anti-American domestic media.

Athletes do not just represent themselves but have the prestigious honor of represent their country, the place that provided athletes with the support, opportunities, and resources that prepared them to compete on the world stage.

Hence they raise the national flag and play the anthem of the home country of the respective successful athletes. And for those who love their homeland more than themselves, just representing your country at that level is the honor of a lifetime.

The medal count is organized by nation not individual. The flag and abbreviation of the respective country an athlete hails from are placed next to his/her name.

Otherwise the Olympiad would be nothing more than a collective competition of athletes sporting numbers, like a marathon.

If Berry truly has a problem with the United States, our flag, and our anthem then she should either skip the Olympics or opt to represent another country that reflects her values.

The United States squad need not be burdened with the presence of someone who resents America nor the distraction that Berry will engineer to bring further attention to herself.

She would also be more than welcome to picket outside the competition and if so inclined seek asylum at a country she feels is less oppressive than the liberator of tens of millions of people.

Unless she’s seeking a gig as a contributing commentator on MSNBC, there’s not much of a long-term upside to Berry’s contrarian behavior.

And the nation will eventually forget who Berry is, maybe recalling her antics but probably not her name after the curtain drops on this “Copy Kaep’s” fifteen minutes of social justice tantrum theater.

Berry has no business being part of a national team of a nation she thinks so low of and her presence will only overshadow the achievements of her teammates who are there for altruistic reasons.

Only in a new woke world where politics trumps excellence would an athlete who finished third would receive more publicity than the two competitors who finished ahead of her, DeAnna Price and Brooke Andersen.