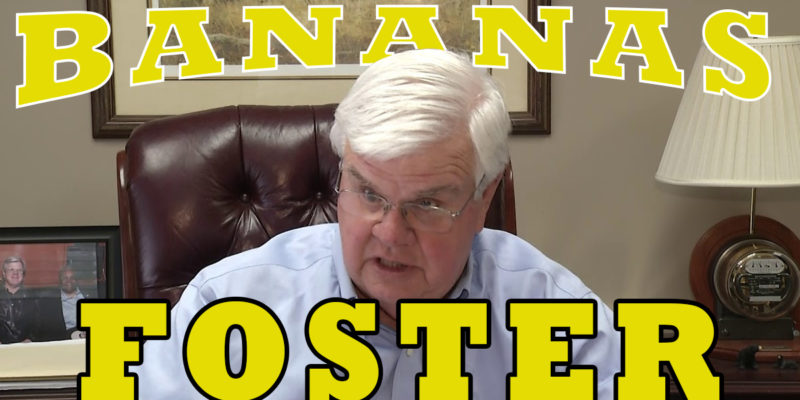 No doubt one reason for the Earth’s warming of a couple of degrees in temperature over the past several decades is the hot air coming from north Louisiana’s Democrat Public Service Commissioner Foster Campbell.

Recently, Campbell shopped around an opinion piece into which a couple of online news outlets bit. And it goes off the rails right from the start: “The punishing heat wave in the western United States and heavy flooding in the Northeast from Tropical Storm Elsa provide more evidence that the world’s climate is changing” – yet the data show neither heat waves nor extreme weather events increasing in frequency for the last several decades, so how could these become evidence of climate change?

It goes downhill from there. Finding inspiration from the discredited disseminations of Democrat former Vice Pres. Al Gore, Campbell marries fact-impaired faith in catastrophic anthropogenic global warming narratives with conspiracy theories he has advanced in half a century of elected office: Big Oil standing in the way of the state’s economic and environmental security, preventing a tax swap that would grow government and benefit him personally while driving away fossil fuel business (mimicking the impact of other tax increases on the industry that invalidates Campbell’s thesis that such predatory behavior won’t cause the industry to reduce its state footprint), and decrying the reduction of the privileging received by the renewable energy sector in the state – even as recently the LPSC stupidly acted to reward a major power producer for ramping up expensive renewable energy production against its own staff’s advice and the state of Texas’.

As an outgrowth of his CAGW faith, Campbell in the piece continued to advocate for more state assistance to renewable energy as a means to ameliorate the imaginary disaster ahead, apparently entirely unwilling to admit to the problems of intermittency (in generation and power grid stability) in solar and wind power production. Even if these could be solved in the near term, the further issue of battery production (itself an energy-intensive, excessive greenhouse gas producing process) necessary to reduce renewable energy unreliability remains. Better to let the private sector make technological advances in these areas without government assistance than to throw away money on current wasteful and inefficient applications.

But where Campbell goes into his most complete denial comes when he actually blames the state’s relatively low level of economic development on wealth allegedly concentrated in a few industries. In a tangential way he identified the problem – a concentration of wealth, not anywhere in the private sector but in one institution: Louisiana state and local government.

Louisiana has fallen further and further behind precisely because it taxes and spends too much, with a history of missionary zeal in redistributing wealth, often at the expense corporations and especially those from out-of-state (almost by definition, since its anti-business policy has caused almost all of its leading corporate lights decades ago to flee). And Campbell has cheered on and prodded along this for decades. He and those who share his agenda are the real problem.

Fortunately, in the past 15 years politicians with his views have become scarcer in the state and their influence rapidly declining as the electorate has woken up to their false promises and prescriptions. Campbell himself barely survived reelection last year against an opponent who hardly campaigned, and continues in the minority on the LPSC.

That means for another five-and-a-half years, barring a successful recall, his district is stuck with him. As such, if he really wants to do something about the climate change he believes stems from greenhouse gas emittance, he needs to give up his cattle business because bovines produce about 10 percent of all human-induced such gases – in the form of methane, no less, that traps 28 times more heat than carbon – or at the very least feed his herd seaweed.

Interested in more national news? We've got you covered! See More National News
Previous Article Who To Be Mad At For Simone Biles, And Other Quick Takes
Next Article Proof That You Will Not Be Allowed To Kill Off The Legacy Media