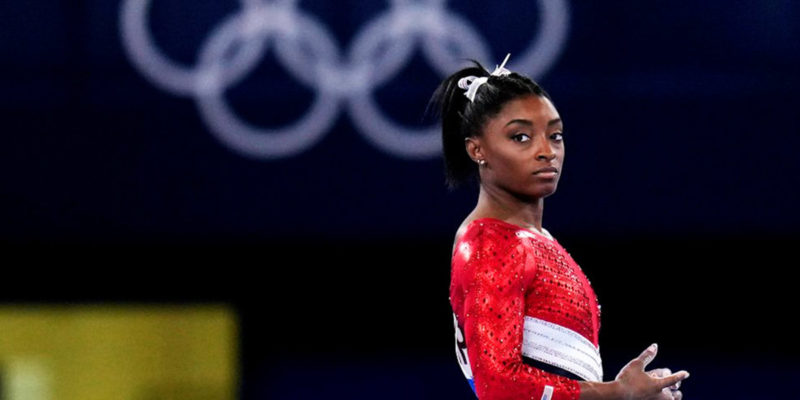 I’m going to say it, and it’ll shock some of you, but Simone Biles is washed up.

She proved it in Tokyo. Unbelievable career, but all the signs were there.

If you watched the Olympics last night, the women’s gymnastics competition was on. Biles quit halfway through, which was actually a benefit to the US team. She was scoring so badly – clearly the worst one there – that she was dragging the team down. At that point, from a competitive standpoint withdrawing was the best move to help Team USA at least get a silver medal.

Then Biles’ camp put out a cover story talking about mental health or whatever. That’s what you get in 2021 for PR purposes, because Simone Biles is a lot more of a commodity nowadays than an athlete, and her brand has to be protected so that her entourage can make payroll.

Everybody is doing one of two things right now – they’re either castigating Simone Biles for being a quitter, or they’re fawning on her for being brave. Neither one is really true.

A 24-year-old gymnast is generally too old for Olympic competition. Most Olympic gymnasts are teenagers. What hurt Biles is having the Olympics delayed a year. She might have been all right if the Olympics had gone off in 2020. But she wasn’t all right now. That doesn’t take anything away from the legendary career she’s had. But she’s not Tom Brady. She’s Drew Brees.

In other words, this is on the coaches. And of course, with all the garbage surrounding US gymnastics right now, and particularly emanating from the Larry Nasser sexual abuse scandal, the people who run that enterprise don’t get the benefit of the doubt.

They let outside considerations rather than objective merit govern the formation of the roster, and now there’s another debacle on their hands. Now there’s a silver medal rather than the gold that was attainable.

Biles isn’t even really the story here. The story is weak leadership and management. At the end of the day Biles is no different than the quarterback who can’t stop throwing interceptions and needs a spot on the bench.

Crenshaw and Perry trump Trump in TX-6: Jake Ellzey took out Susan Wright in the special election for Texas’ Sixth Congressional District seat last night by a 53-47 count. You’ll probably hear a lot of bleating from the legacy media that this is a defeat for President Trump and his efforts to play kingmaker in the 2022 House races, but that’s overblown.

The fact is that Ellzey, who’s an elected state legislator, is a more experienced politician than Wright, who’s the widow of the deceased former TX-6 congressman Ron Wright. She’d never run for anything before. And while Trump endorsed her, it’s not like he went to Texas and stumped for her or anything. Ellzey had Dan Crenshaw and Rick Perry actively working for him, and that outweighs a mild endorsement of Trump.

As best we can tell there really wasn’t a lot of difference, ideologically speaking, between the two. Either one is a reliable, if not outwardly eloquent, Republican vote.

Biden’s approval sinks to 46: that’s per Rasmussen, and it ain’t good.

A new poll released by Rasmussen Reports on Wednesday morning shows that President Joe Biden’s approval rating has dropped to the lowest level of his presidency thus far, at 46%. His disapproval rating is 52%, putting him six points “underwater.”

Biden’s been at 47 in the Rasmussen poll before; that happened in March. But he’d managed to climb back over 50 since then. Now he’s in the soup. Rasmussen does a thing called an “approval index,” which simply measures strong approval against strong disapproval, and finds that Biden is at minus-16 on that number. Only 26 percent of their respondents give him strong approval (talk about low standards!), while 42 percent give strong disapproval.

Another way to look at that is Biden is sitting at 20-10 approval among people who don’t really give a damn. That could flip easily with a bad development here or there.

The Yawn-Six commission: My new American Spectator column is up. Here’s a taste…

Another witness coughed up this laugher after surmising some of the trespassers in the Capitol that day might have had guns in their bags: “If there had been a fire fight we surely would have lost.”

This is supposed to be evidence at a congressional hearing?

There were weapons found on some of the demonstrators. They had bear spray and baseball bats. A few had knives. One had a “sharpened” flagpole. Supposedly there was a gun or two, but last we checked no one has been arrested on any weapons charges arising from Jan. 6.

By the way, there was a firefight inside the Capitol on Jan. 6, you know. It was pretty one-sided. Just ask Ashli Babbitt.

Oh, that’s right. You can’t. You’re not even supposed to know which Capitol Police officer it was who shot and killed her, despite the fact the name of Lt. Michael Byrd has already been leaked and RealClear Investigations confirmed he was the one who put a bullet into her neck.

If that little facet of Jan. 6 is to be covered in the committee’s work, we haven’t been notified. Something tells us that this kangaroo court isn’t going to get there.

As the Spectator’s Dan Flynn said in his newsletter this morning, there are two questions a real One-Six committee would be focusing on: first, who shot Ashli Babbit, and second, why did the ruling elite go a whole month with the lie that Capitol Police officer Brian Sicknick was murdered with a fire extinguisher?

There are more questions than those, of course. There’s the level of agitation our government and the Left are directly responsible for in turning that demonstration into a Reichstag fire. Maybe a lot, maybe not much. But we don’t know the answer, and we aren’t going to get it from this show-trial. There’s the question why all these people accused of non-violent crimes connected to One-Six are rotting in jail. And there’s why Pelosi ignored advice and warnings about insufficient security at the Capitol that day.

But they aren’t going to get into any of those subjects. As such, nobody should give a damn about their stupid hearings.

Vaccines vs. cures: Earlier this morning we had a piece by Walt Garlington here at the site advocating for over-the-counter use of the antiviral drug Ivermectin, which has shown to be pretty useful against COVID-19.

Ivermectin, which like hydroxychloroquine is a dirt-cheap, commonly-prescribed antiviral with a host of uses, has like HCQ been the subject of a withering PR campaign. You won’t find doctors readily prescribing it for COVID here in the states.

I’m not an expert on this subject and I don’t pretend to be, but I am pretty unfavorably impressed with everything I’ve seen from the medical community where this pandemic is concerned, and frankly I’m ready to say it’s time to put these people in their place.

Because what’s perfectly clear by now, 16 months into 15-days-to-flatten-the-curve, is that COVID is the first disease in human history nobody seems to want to cure.

They’ve put everything into the idea of vaccinating people against it. I understand the public health objective of that – if the vaccine works, then you can get past this thing and go back to normal. And I’m not an anti-vaxxer. Not at all. I like the idea of the FDA giving approval to a COVID-19 vaccine before I’ll get excited about taking the jab, but when I see that, sure. I’m on board.

But vaccines are for polio. Smallpox. Measles. They’re for diseases that kill, maim, disfigure. Kids get vaccines for these kinds of diseases because they’re vulnerable.

Yes, if you’re old or fat or have some other kind of comorbidity, you should probably get vaccinated for COVID. Your risk of death or serious illness jumps up quite a bit. But if you aren’t, and you don’t want to take a vaccine, these people have no business telling you that you have to.

Especially with a virus that has such a low death rate. COVID is treatable. And yet the medical community, and more particularly the public health crowd, doesn’t seem to have a whole lot of interest in treating it.

I still can’t figure out why, if you test positive for the virus, they don’t give you a paper bag with a five-day course of HCQ (or Ivermectin), Z-Pak and zinc supplements and tell you to follow the dosage instructions to the letter. That’s been tested as being better than 80 percent effective in preventing serious symptoms. Why wouldn’t you knock out four-fifths of the problem with a dirt-cheap solution?

Mostly because Big Pharma can make a whole lot more money charging the government for a vaccine the media hypes as absolutely life-saving than it can cranking out Ivermectin or HCQ pills at a few cents a pop.

This is on Trump, by the way. He had the right idea about COVID from the start, which was to come up with ways to treat it. The best case scenario is that everybody gets exposed to this thing but doesn’t get too sick from it, builds immunity to it and then we move on. Vaccination, particularly of people at risk of getting very sick, is certainly a big piece of that. But treatment is, too, and so far that remains a gaping hole. And after the media – which don’t kid yourself depends desperately on big ad spends by Big Pharma – tore Trump apart for “suggesting injecting bleach” and other stupid lies, he backed down.

Making things like Ivermectin and HCQ over-the-counter medicines would be a way to free us from the tyranny of the medical monopoly. Let’s not pretend that this is so risky, by the way – the same medical community waxing sanctimonious over HCQ and Ivermectin dove headlong into dragging the country into an opioid epidemic. Docs said very little about the pill-mill operators pushing out oxycontin and other such addictive substances, so I really don’t want to hear them whine about using drugs they’ve prescribed for 75 years for something they apparently are good for.