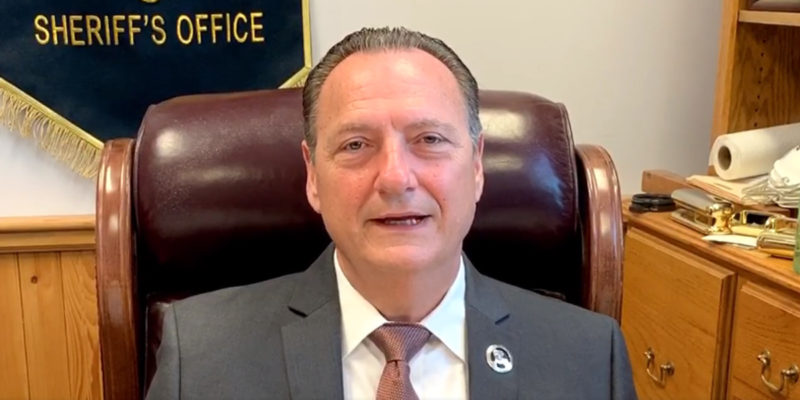 You might think Republican Lafourche Parish Sheriff Craig Webre, after nearly three decades in office, would have learned it is an asset in politics to know what you are talking about before you open your mouth. Only in office less than a decade, Republican Bossier Parish Sheriff Julian Whittington showed him how it’s done.

Last week, in an assemblage of a few dozen law enforcement officials that included a dozen of the state’s 64 sheriffs, Webre emerged as the most outspoken critic of efforts to overturn Democrat Gov. John Bel Edwards’ veto of SB 118 by Republican state Sen. Jay Morris. The bill would remove permit requirements to carry a concealed firearm for most citizens, which currently include a fee, paperwork, and mandatory training classes.

At the made-for-media, if not Astroturf, news conference, Webre expressed several sentiments. “I don’t want to be at a Mardi Gras parade with my daughter where someone jumps up to catch a bead and that gun falls out their waistband it hits the concrete, goes off and innocent people get killed …. I don’t want to go into a department store or restaurant and wonder who might be carrying a concealed weapon.” He further alleged that the bill “not only is going to endanger the law enforcement community, it will endanger the general public as well.” And, he claimed it could embolden untrained people to act like citizen vigilantes, unnecessarily escalating minor incidents into deadly ones.

Webre had an audience, and he displayed passion. Yet the one thing he didn’t have was any evidence to back his assertions. He didn’t have a shred of proof, aided by an incurious Louisiana mainstream media that didn’t press him on anything he said nor even asked him why over 20 states, several recently adding it, had on the books the same law against which he railed.

You see, Webre and his ilk can’t point to one incident where somebody carrying a concealed firearm in a state without a permit requirement had that weapon clatter to the ground and fire, much less hit anybody. Nor can he do the same regarding alleged “vigilantism.” In fact, the sparse research on the matter indicates on the whole the impact of concealed carry without regulations like permits is … none. Some studies measure no actual impact, others find small negative effects, yet others discover small positive effects.

But where we do have relatively solid data on crime, Webre doesn’t come off looking so good. Through 2019 compared to when he took office in 1992, the rate of violent crime in Lafourche has more than tripled, with a major acceleration from 2016, and clearing such cases hasn’t kept pace. Meanwhile, the rate in Louisiana over the same period has fallen by almost half, so Webre doesn’t have a whole lot of credibility to lecture others about crime policy.

These doomsday scenarios parroted by bill opponents are all fantasies driven by political preferences and agendas. Scratch the surface of the rally attendees and you’ll find an awful lot of support for Edwards as politician. For example, Webre donated to Edwards’ gubernatorial campaign, and not to his Republican opponents. Note also that the Louisiana Sheriff’s Association has stayed out of this controversy, indicating (appropriate to the relatively few sheriffs that endorsed bill opposition) split views among members although likely majority support of the bill.

But while Webre brought a knife to this public policy fight, Whittington brought a gun. When asked about claims forwarded by Webre and his cohorts, Whittington dismissed them using a phrase often used by one of Edwards’ favorite politicians: “malarkey.” He said, “the big picture here is, the law-abiding citizens’ Constitutional right to carry a weapon is theirs. They don’t need a permit to do it …. A lot of [the law enforcement officers publicly against the bill] are drinking the Kool Aid. There are no statistics, nowhere that I’ve seen or found, that suddenly you’ll have blood in the streets and mass shootings [with Constitutional carry].”

Unlike Webre, Whittington did his homework, even if limited to his own jurisdiction. “In my 33 years here at the sheriff’s office – I checked our records – there is no record of us ever arresting a murderer or gangbanger, a drive-by shooter, who had his concealed [carry] permit in his pocket.” And he summarized his view of the law’s impact: “If you’re in a Walmart and a crazed gunman is going around executing people, do really care if other people in that store – if they have a gun – do really care if they have a permit with it or not? You’re just going to be looking for all the help you can get.” (By the way, the violent crime rate in Bossier Parish has remained largely the same since Whittington started in the department and when he became sheriff, with the state rate largely mirroring the parish rate since he took over.)

When Louisiana legislators congregate later this month in an apparently inevitable veto override session, they need to ignore the ignorance behind Webre and his allies and follow the advice of Whittington in overriding the senseless veto of SB 118.