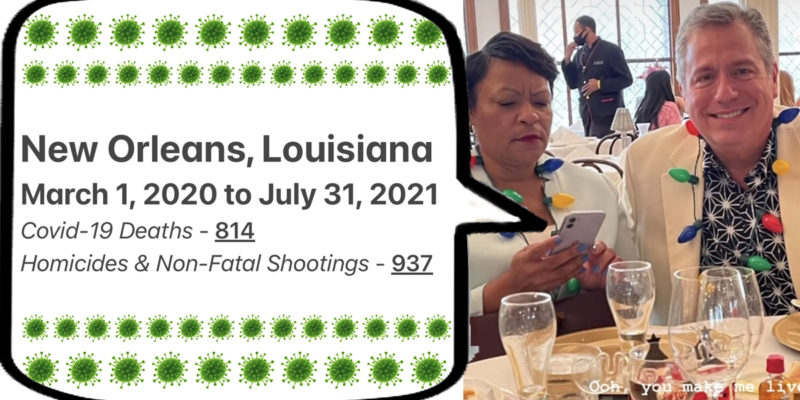 In New Orleans, the likelihood of dying from COVID-19 is lower than the chance of being killed or non-fatally shot. Mayor LaToya Cantrell issued a mask mandate on July 30th, following an event at Arnaud’s Restaurant in which she was mask-less in a half dozen photos posted on social media.

Politicians, entertainment news figures, and government agents regularly broadcast the COVID-19 case rate, yet they rarely, if ever, focus on the number of lives said to have been taken by the China virus. The Trust-The-Science crowd has largely ignored the data showing that most who contracted COVID-19 recover at an astounding rate.

This piece explores the number of COVID cases, alleged COVID fatalities, non-fatal shootings, and homicides in Orleans Parish. Using that information as a baseline, it then looks at the numbers in a few different ways. This information was tracked from the beginning of March 2020 through July 2021. It’s a good amount of figures for an article, but it uses real numbers not vague percentages.

Digging into the COVID data shows some interesting math. First, 10% of New Orleans’ population (if all tested in OP lived in OP). Less than one-quarter of a percent of New Orleans’ populace, 0.23%, have died from COVID since March of 2020. Reverse those figures and you get 90% of people in New Orleans have not tested positive for COVID-19 and 99.76% of residents have not died from it. Reread that last sentence, the data is pertinent.

Now onto violence in the #CityofYes. Unfortunately, the COVID data can be found much easier than crime statistics in The City That Care Forgot. To complicate the review, NOPD’s crime dashboard does not match up with figures from news reports.

In the year 2020, 425 non-fatal shootings were reported in Orleans Parish, and the homicide rate was reported as 195 lives lost. Twenty-seven people were killed in New Orleans in January & February of 2020, so the 195 number has been adjusted to equal 168 deaths from March 2020 through December 31st.  The non-fatal shooting number (425) is for all of 2020, so it was pro-rated by month, then two months subtracted for January and February to reach 354. This 354 figure is not fully accurate, but rather a conservative estimate since shootings increased after the lockdown. However, using what was found, the total number of people shot added to the number of people killed in New Orleans since March 2020 totals 522 people. (Not all deaths mean fatal shootings, so those numbers will be treated as two pieces of data.)

The data supports the statement that people in Orleans Parish have a higher risk of being shot or murdered than they do of dying from Covid-19.

A new study by WalletHub analyzed national crime data and determined that of the “Cities with the Highest Increase in Homicide Rates During COVID,” New Orleans landed at the top spot in the United States–above Cincinnati, Baltimore, Philadelphia, and Detroit.

If the Wuhan Flu is a plague in New Orleans, shootings and murders should carry a more alarming plague status.

This 17-month time period has other life-loss data that crosses into topics-people-don’t-want-to-discuss such as the suicide rate and the number of aborted lives. How many people in New Orleans have taken their own lives since March 2020? How many human lives have been squashed inside of women by medical professionals since March 2020? They are both tough topics, but no one should hide from them. These conversations do not need to be front and center, they’re rough, but as a civilization they cannot be ignored.

Yes, COVID-19 has tragically claimed many lives. The virus has occasionally strayed from the elderly and from patients with preexisting conditions, and it has killed younger, healthier people. No matter, leaders have not regularly encouraged exercise, improved diet, or time outdoors—the political, medical, and entertainment media have chosen to die on the hill of stay home, “Mask up, Nazi!,” socially distance, and Vax or Die!

So what should be different? Treat the sickness as a recoverable, treatable illness for the overwhelming number of people (97.68%) who are fortunate enough to contract it yet survive. Focus on the race, sex, age, and common conditions of those most vulnerable and suggest protective actions—then let people make their own decisions as to how they choose to live in a city where they have a 10% chance of contracting the Wuhan Flu, a 97.65% chance of surviving it, and who are in the 99.76% of New Orleanians who have not died from COVID-19.

Or, maybe Mayor Cantrell and the City Council should shut down the city until the violence ends. The Mayor imposed regulations on people, businesses, schools, athletics, activities, and anything she could attempt to control in the name of COVID prevention.

When it comes to violence and crime, LaToya Cantrell has no track record of imposing societal restrictions. This reveals Mayor Cantrell’s complete disregard for future victims of violence, while at the same time she obsesses over the big scary plague that’s less of a threat than the crime vulnerability of existing in the once great City of New Orleans.