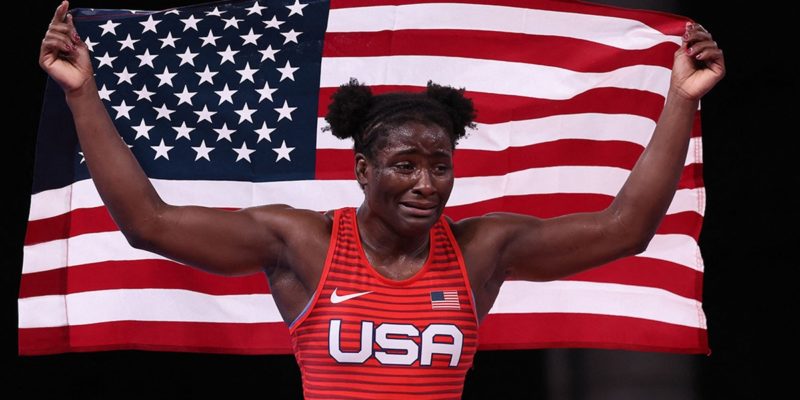 You have to give it to the Tokyo organizers of the delayed 2020 Summer Olympics: they found a way to go forward even with navigating major risks and public relations blowback from the 400,000 pro-cancel petition signers under the impression the world should bunker-sleep their way through the pandemic.

Thanks to stringent testing and monitoring within the Olympic bubble, only 32 athletes out of 10,000 plus participants on site tested positive for COVID-19.

Through precautions life can indeed go on even in the midst of a global health challenge.

In fact it must.

American athletes won the day, or the Olympics, in the medal count (with 113 total) and in golds, nudging past Communist China 39-38.

Once again swimming proved to be a strong suit for Team USA winning the 4 x 100 m freestyle and medley relays.

And then there are the three big names to leave Tokyo with gold:  Suni Lee in women’s gymnastics all-around, Katie Ledecky in the 800 m & 1500 m freestyle swimming, and Caeleb Dressel’s three individual swimming gold medals (50 m freestyle, 100 m freestyle, & 100 m butterfly to go along with his two team relay golds.

The pride, joy, and patriotism exhibited by our country’s champion athletes was moving perhaps none more so than history-making black female wrestler Tamyrah Nensah-Stock.

The Old Glory draped Mrs. Stock, whose father was from Ghana, gushed to NBC about the pride of representing her country, her love of the USA, and “freaking” joy of living here.

I hope this is not just the last time I type this name but even hear it.

The notorious women’s hammer throw competitor who placed third in the US Olympic trials and proceeded to act a fool on the podium during the playing of the Star Spangled Banner and then doubled down on her Kaepernickian schtick once again in interviews again finished three spots behind her American squad colleagues…and 11th behind everyone else.

To nobody’s surprise Berry received an inordinate amount of press for a Third-Place female hammer thrower going into the games and due to once again underperforming on the world stage was mercifully denied an opportunity to make an international scene.

Rapinoe and all but one of her teammates knelt after the playing of the national anthem, with the 39-year old Lloyd refusing to join the protest.

Lloyd leaves Tokyo the US’ all time leading female Olympic soccer scorer while the now pink-haired Rapinoe, who has not achieved as much as Lloyd on the pitch, is off to lucrative endorsement deals with Subway and, hilariously enough, Victoria’s Secret.

By the way, the decidedly woke Women’s basketball team jettisoned their WNBA anthem protests for the Olympics. They brought home gold medals.

A Little Help from the Other China

One of the reasons Communist China did not end up as the leader in the gold medal row has to do with their rebellious island neighbors in the south.

Taiwan defeated the PRC for the gold in badminton in a compounded humiliation for Beijing as the “Republic of China” national flag anthem played while Lee Yang and Wang Chi-lin stood on the top spot of the medal platform over the Red Chinese tandem they defeated.

No word from John Cena if he intends to issue an apology in Mandarin to the Chinese government for this unpleasantness though the folks in Taipei couldn’t have been happier to provide what turned out to be a critical assist to Team USA.

Interested in more national news? We've got you covered! See More National News
Previous Article Bill Cassidy Ought To Serve Out His Term And Then Never Show His Face In Public Again
Next Article CROUERE: Republican RINO’s Betray Grassroots Once Again