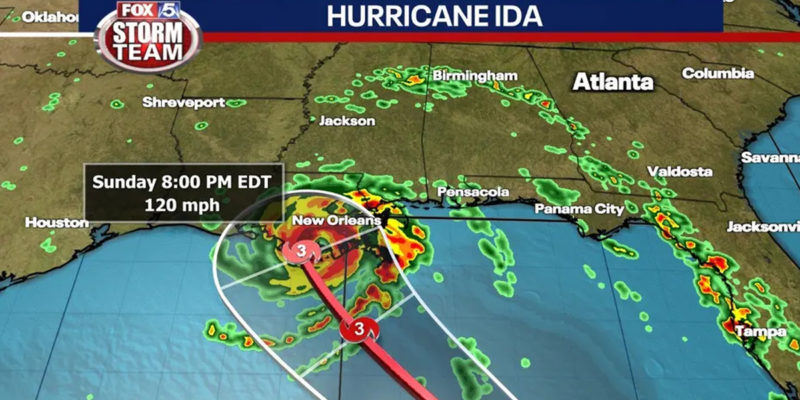 Sixteen years ago on this very weekend I was playing cards with friends and watching the Weather Channel.

I had no intention of leaving for Katrina.

Yet I’d never seen a monster that big in my life and there would be no wobbles or course changes to alter the inevitable.

Call it the sudden grip of fear or credit an epiphany from above, I decided an escape plan.

Yes I needed a plan and a plane since my humble Ford Escort would overheat in a Burger King drive thru and would’ve never made it through contraflow traffic.

Fortune found a way (a last second flight seat opened up) and the charity of a friend from college residing in Arizona provided me shelter.

It was the smartest thing I ever did in my life, not just from the perspective of self-preservation but also I was in a place with working communications where I could provide logistical assistance to folks who chose to stay or were obligated to remain.

Saturday morning I will see if I need to help with a community evacuation.

But after all tasks are completed I’m hitting the road.

I won’t be riding out this Category 3 storm with the potential for even greater strength or hunkering down (whatever the hell those commonly tossed about expressions actually mean).

The biggest looter is the storm and there’s not much you can do to protect stuff on site.

You can’t shoot at 18 inches of rain fall or swing a baseball bat at 120 mph wind gusts.

If you want to save things, you best take them with you.

Zeta had power out in my area for weeks; and this is much bigger.

You don’t receive a reward or a medal for sticking around.

The closest decoration you can have is buying one of those magnetic ribbon stickers with “Ida Survivor” from the convenience store later.

And that won’t earn you a 10% veterans’ discount at Waffle House.

If you’re south of Lake Pontchartrain you should leave.

And if you’re north of it by a distance of less than two miles, you should leave.

If you live south of St Francisville and absolutely need electricity, you should leave.

This evening I will eyeball what I need to take and what I should secure and leave behind and then I’ll sleep in my bed and stare at the ceiling, seemingly mundane things that have meaning during this time of year because those exact things might not be there in the same condition when I return.

When I went to sleep on Thursday, August 25th I had no inkling that would be the last time I’d sleep in that particular bed and stare at that very ceiling.

Eleven feet of storm surge that poured into the townhouse I once called home provided the watermark that I forever divide my life, pre-Katrina and post-Katrina.

And you don’t want to end up like my neighbors.

As I was hauling what I could to my hatchback I caught a glimpse of the spectacle of watching this unwise pair carrying cases of beer and bags of ice inside their unit.

When I came back I took the liberty of entering their abandoned abode.

The National Guard had already did a forced entry searching for bodies and the door was busted in.

When I reached the second floor I saw that the dumbbells had used a barbell to puncture a hole in their ceiling to signal a helicopter for help and that the bedroom window had been completely busted out in order to lower themselves on to a rescue boat.

If you have a stubborn loved one in the danger zone who declares he or she (you’d be surprised the lack of exclusivity of sex in this mindset) will die in their house do not stop pestering them until they agree to leave.

And if need be, prepare yourself to carry them out against their wishes (which is how I spent part of my 8/27, denying my sickly paternal grandfather his insistence of perishing in his home).

If you have the means it’s not too late to get out.

Don’t fret over your electronics, clothes, or freezer meat.

You read that right.

This is south Louisiana.

Ida is far more likely to take it from you than AOC and Bill Gates.

This worst that can happen is that the worst happens while you’re in the spot where it’s actually happening.

The best way for south Louisiana to stay safe this weekend is to get out.

Interested in more news from Louisiana? We've got you covered! See More Louisiana News
Previous Article Hey, Who’s Up For A Hurricane?
Next Article Hurricane Ida Might End Up In Katrina’s League, Or Worse