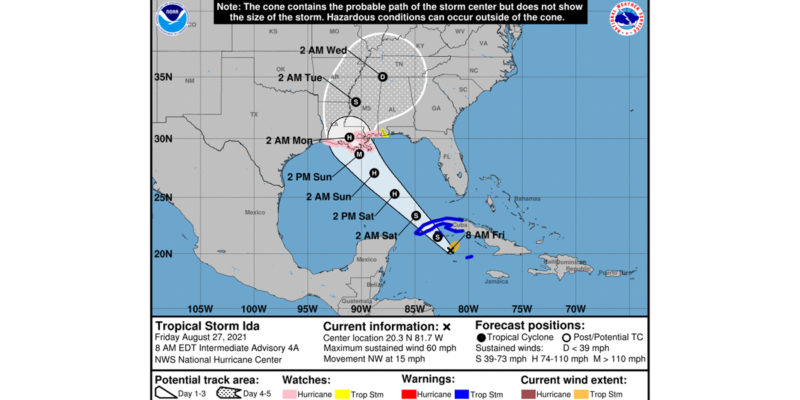 Just in case you thought life in Louisiana couldn’t get any worse between the tyrannical, economy-killing actions of our power-mad lunatic politicians, our runaway crime rates, crumbling infrastructure and woke educrats, we might have actually found a cherry on top to complete the cycle of misery. Fancy a hurricane to hit us early next week?

Actually, it doesn’t matter whether you do, because here comes Ida…

Ida pushing from the Caribbean towards the Gulf of Mexico. Once the storm moves into the Gulf it will move over very warm water and into a low wind shear environment paving the way for rapid strengthening. The latest official forecast from the National Hurricane Center predict a category 3 storm with maximum winds of 115 mph. We are always encouraged to prepare for a category higher as intensity forecast have a larger margin than track. Today and tomorrow are days of preparation where we still have to be mindful of local weather. Tropical down pours associated with the current wave pushing across the region could bring heavy rain leading to isolated street flooding.

Late Satuday evening rain bands from Ida will likely begin to approach the coast with conditions going downhill by early Sunday morning. A landfall somewhere along the Louisiana coast is likely Sunday afternoon. Coastal water rises begin on Saturday as well with some early forecast of 3 to 6 feet in water rise. Surge is highly dependent on exact track and could be higher depending on the strength and path of the storm.

This morning’s forecast says it’s going to be a Category 3, with winds up to 115 MPH. The storm track looks like a landfall maybe a little west of Morgan City, which would mean practically the entire coast would get hit.

And there is the inland extension of the HURRICANE WATCH

So as of right now, we’re looking at a landfall something like midnight Sunday night between, say, Morgan City and Vermilion Bay, and the whole day Monday with southern Louisiana getting pounded by a major hurricane. At least the current forecast has this thing getting out of here reasonably quickly, but that’s small solace to the folks down by the Gulf who could well find themselves having to rebuild starting next week.

Stay safe, everybody. Pack up the car and head out if you’re where this thing is coming ashore.