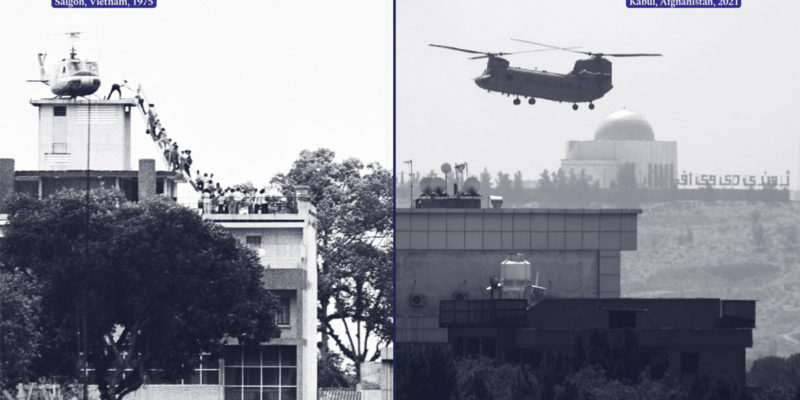 “Don’t call it Saigon!” cried the Biden Administration’s Secretary of State Antony Blinken, as comparisons immediately sprouted in the face of the sudden collapse of the Afghan government.

No, that would be unfair. This isn’t Saigon. Not exactly.

Firstly the South Vietnamese acquitted themselves far better with fewer resources as Democrats in Congress sadistically cut off material and air support for the Saigon government.

And secondly, the US military had pulled out a full two years prior to the time the first NVA T-54 tank plowed its way through a barrier on to the grounds of the presidential palace in Saigon.

The only Americans fleeing Saigon in that fall were embassy personnel, as the country they worked in ceased to be.

In contrast, the Taliban were literally firing guns and chasing Americans through the streets of Kabul to the airport while we are still in Afghanistan.

This is far worse, making our current departure resemble something out of Dunkirk as US military personnel attempt to hold a perimeter around the primary remaining escape route from the sweeping Taliban forces.

Not that the Taliban beat US forces, but rather they stampeded a haphazardly diminished military presence, arbitrarily reduced for political reasons and not strategic purposes.

While the Taliban might be culturally medieval, they can read newspapers and internet news sites.  Especially when the president announced an awfully ironic date for the official withdrawal that demoralized Kabul forces and emboldened the Taliban to accelerate that for Washington.

In 24 hours the Taliban barbarians did more to undercut the credibility of US intel operations and leadership than five years of mean Trump tweets.

Our supposed foreign policy expert president, proof that one can literally spend decades on a committee and still not learn a damned thing, has ghosted America during this moment with his office saying that the vacationing president will address the country in a few days.

Apparently they need to work on updating his Teddy Ruxpin cassette of cranky rejoinders before he faces potentially objective questions from a mostly collaborative press corps.

And the imaginations of Biden’s handlers will be stretched to the point of snapping as they attempt to blame someone who has been out of office for eight months – for those were certainly not Trump’s intel folks painting a rosier situation around Kabul than what actually was.

The first and foremost thing at this juncture is reinforcing that what happened in Kabul is not the result of any failure of our servicemen and women.

For almost twenty years to the month, our military performed in exemplary fashion in driving the Taliban out of power and into caves in the hinterlands. They brought justice to many who aided and abetted the al-Qaeda terrorist network which attacked our assets overseas and our civilians at home.

None served or died in vain and they avenged our national suffering on 9-11 with a heroism and ability that demonstrated that they are indeed the world’s finest fighting force.

They were undefeated in battle and they in no way own an ounce of this Kabul fiasco. The men and women in uniform do not form American policy but execute it.

The Taliban did not push them back so much as Washington officials ineptly pulled our armed forces back with Islamic insurgents merely filling the vacuum.

Furthermore our military gave a generation of Afghan women the opportunity to live in dignity and for those who previously had not been treated better than human chattel under a misogynistic regime an opportunity to know what freedom was like for twenty years.

Unlike the south Vietnamese, the now deposed Afghan government enjoyed continued support from our national treasury and military training and equipment.

Now the Taliban has much of the latter.

The difference was that the south Vietnamese and Hmong were prepared to fight while the Afghans simply weren’t, tolerating kleptocracy on the national through the village levels of leadership and accepting the role of victim of history.

The United States went above and beyond expectation to support the country but not even the greatest power can build a nation that the people refuse to support and defend.

That said, there will be great suffering endured by women seeking to preserve their dignity as human beings, different but not subservient to men, and those free thinkers whose spirit cannot abide and accept an imposed culture that demands conformity under pain of death.

There will be a time for recriminations in our nation’s capital and there must be an accounting of this last disastrous chapter in the American involvement there, at least in this volume.

In the meantime, let’s thank those who unselfishly served our nation in Afghanistan and pray that they do not believe for one second that their time and sacrifice was meaningless for it wasn’t.

And save some prayers for the Afghan people. They’re going to need them.