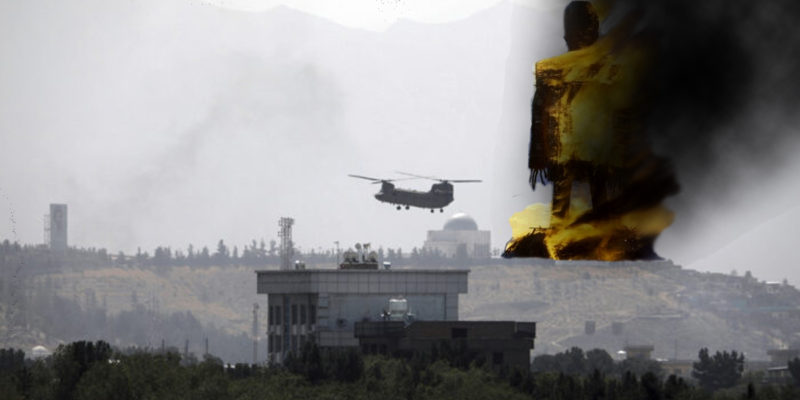 The whole country is abuzz over the denouement of American involvement in Afghanistan, and horror at the ignominy of frightened Afghans blocking runways and falling off ascending planes as the Taliban advance seems to be more or less universal.

It doesn’t help that the human potato who occupies the White House – actually this week, amid the collapse of American foreign policy in Afghanistan he’s occupying Camp David – seems completely disengaged and careless as to the suffering his decisions have brought on.

Biden appeared for 18 minutes at the White House, flying in from Camp David just before speaking, then flying right back to his vacation. He took no questions, and he accepted little accountability for the shift in U.S. policy which led to the current situation as the Taliban have overrun that miserable land in central Asia.

Virtually everything he said was wrong, but the central problem with that speech, which could very likely result in the effective end of his presidency barely more than six months into it, was that it was an exercise in setting alight a gigantic straw man the whole country can identify as such.

Better than two-thirds of the American people want out of Afghanistan. They’re tired of the blood and treasure spent on a country which will never get itself figured out. American’s don’t know a whole lot about Afghanistan, but what they do know is it’s one of the world’s worst places, an Islamist hellhole where life is cheap, enlightenment is scarce and civilization is an alien, hostile thing. After 20 years and $2 trillion, we have conclusively proved there is no reforming Afghanistan into Switzerland.

The issue was never that we were going to remain in Afghanistan in any appreciable way. Had Donald Trump been re-elected, our plan was to get our people out of that country by May 1. Presumably – more than presumably – that would have meant drastically reducing the number of civilians exposed to harm if and when the Afghan government failed and conducting an orderly evacuation of Americans and friendly Afghans where needed.

The deal Trump made with the Taliban held that U.S. troops would come out of the country based on a series of contingent circumstances, and the Taliban were aware that overt aggression against the Afghan government would result in death from the air as our bombers, drones and missiles would enforce their obligations.

Now – what is true is that the Afghan government and army were never able to stand on their own. Biden isn’t wrong to say that America has no obligation to fight for a country which won’t fight for itself. And the incredible structural flaws built into what we saddled the Afghans with didn’t come from Biden – at least, not from his presidential administration. The Afghan government was a concoction of Western NGO’s and social engineers, and much of what it brought to the people of that country was recognized as decadence and dysfunction. That is one of the most backward, barbaric societies on earth, and demanding affirmative action, tolerance for homosexuality, and Third Wave feminism, paid for by billions of dollars in bribes, was never going to work. It was the Bush and Obama administrations who saddled the Afghan government with far too much left-wing social engineering, just as our military built an Afghan army dependent on air power for its basic strategic survival.

Then Biden pulled the air power. He didn’t even allow U.S. contractors to continue servicing the Afghan military’s air assets.

Couple that with the fact the Afghans were perfectly willing to sell everything that wasn’t nailed down, and a lot that was, to the Taliban in return for coming off the list the death squads had put them on, and it was no surprise that the country fell so quickly.

But what was worse was that Biden blew past the May 1 date Trump had set, without moving the civilians out, and extended the pullout to coincide with September 11. It’s impossible to understand why his handlers thought it would be a good idea to use September 11 as the date for our troops to be out of the country; that only highlights the victory of the Islamists.

That fateful decision did two things. First, it freed the Taliban to go on the attack, which they did, under the theory that Biden had broken the deal Trump had made (the Taliban hadn’t held up much of their end, to be fair). They bought up the Afghan army garrisons around the country and then rolled into the provincial capitals, gobbling up the majority of the country in only two weeks once things got going. And second, extending our presence only until August meant that the game was on in the middle of the fighting season in Afghanistan. Nothing happens in the winter in that country, and in the early spring the Afghans seed the fields – in the Taliban’s case they’re seeding the poppy fields, because selling opium is how they finance their war against us. In the fall it’s harvest time. So pulling out in the middle of the summer is giving the enemy a maximum advantage.

All of these considerations are what led to the indefensible circumstances and mortifying video coming out of Kabul.

Biden blamed Trump for leaving him a deal he didn’t like, but of course he had seven months to come up with something else. It’s not like he stuck with much of anything else Trump left to him. Then he blamed the Afghans he had kneecapped.

Yesterday the Washington Post claimed there are some 10,000 Americans stuck in Afghanistan. They’re sheltering in place, because with only the airport in Kabul available as a means of getting out of the country the capacity to evacuate them is nil.

And Taliban death squads are now going door to door with lists of Afghans who cooperated with America over the last 20 years. The recriminations and atrocities have only just begun.

Yes, this is Biden’s Saigon. It could be his Tehran. One senses that we are already promising bribe and ransom money to the enemy in order that he might refrain from beheading our citizens.

And Biden’s party is now demanding a mass migration of Afghan refugees into this country, hewing very closely to their preference for non-Americans over our own citizens.

If there is any justice to this at all, it’s that the price which will be paid for Biden’s failure in domestic politics will be very steep. That awful speech yesterday turned the legacy corporate media against this administration. The subsequent press briefings at the State Department and Pentagon were hostile. The administration is losing its air cover, just as the Afghan government lost it in a different context. And the public is paying attention.

You might see a rapid political collapse now. The Biden administration isn’t built on popular support; what claim to legitimacy it did have came from dislike of Trump’s personality. It has no achievements to fall back on, no policy positions with broad popular support. It has already violated federal law and the Constitution on multiple occasions and it is fronted by a man who is clearly not in his cognitive prime.

All that’s left is the recognition by Democrat members of Congress and others that a comeuppance is coming in the 2022 elections, and that it’s now time to head to the lifeboats. Once party discipline breaks and the individual politicians begin attempting to save themselves, the administration is finished just like Carter and Nixon were.

But this will be more intense than that. Because the world is watching. And it’s going to be open season on America now.