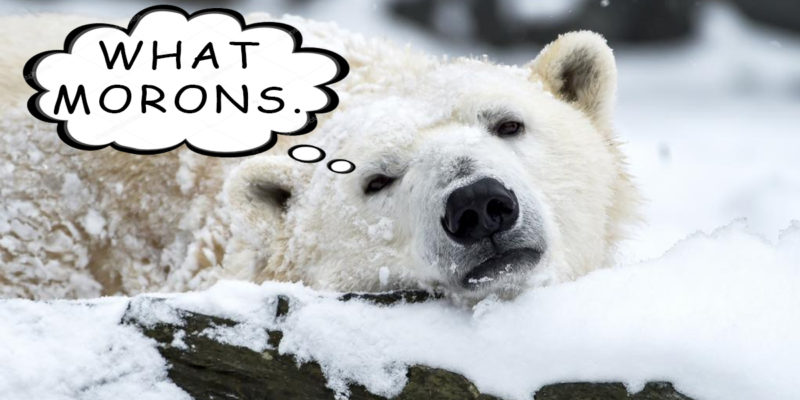 You just can’t make this stuff up. And to the extent that its contents will improve policy-making in Louisiana, that’s a good thing.

The initial hand-wringing from the unbridled hysteria launched by release of the Sixth Assessment Report from the Intergovernmental Panel on Climate Change from the United Nations apparently has had an especially robust impact on snowflakes. Understanding its extent requires reading snippets from the actual text of the news story (my comments in brackets):

A growing number of people are reluctant to bring a child into a world that’s set to be ravaged by climate change in the coming decades ….

… surveys, academic research and Google data that shows climate change is directly and indirectly accelerating the decline in fertility rates …. Some people are choosing not to have children because they fear that that doing so will amplify global warming. “Having a child is 7-times worse for the climate in CO2 emissions annually than the next 10 most discussed mitigants that individuals can do” ….

“It is true that more people will consume more resources and cause more greenhouse gas emissions … But that’s not really the relevant timeframe for actually stabilizing the climate, given that we have this decade to cut emissions in half” ….

“Over the last few years, the climate has definitely been a major contributor to us not wanting children,” Daniel told CNBC, requesting that his surname be left out of the story over fears that he may be targeted online by people who disagree with him …. [Pity the fools, but please don’t harass them.]

Jessica Combes, a 39-year-old English teacher, told CNBC: “I refuse to bring children into the burning hellscape we call a planet” …. [And we thank you for not subjecting a child to such neuroticism, a luxury your students don’t have.]

Thom James, 39, a managing partner at advertising and public relations firm Havas U.K., told CNBC: “I had a major depressive episode last year based on existential angst over the world my children would be growing up in.”

James has two girls aged three and six. “Worrying about their future is a frequent trigger for me,” he said. “I’m constantly thinking about when it’s going to be appropriate to dissuade them from having children of their own, as I think we’re really past the point of no return.” [With a parent like this, I fear for those poor girls’ mental health].

All this is to say some segment of the population is so intellectually incurious and emotionally handicapped over this fake news that they will stop procreating – and thereby increase the future policy victories of those who understand that the religion of catastrophic anthropogenic global warming is anti-science writ large. More specifically, fewer of that kind will be around compared to children of those raised by parents who understand what science really says about a climate that largely changes beyond human intervention and shows no signs of reaching an apocalyptic CAGW scenario any time in the next several decades.

The political behavior research tells us attitudinally that party identification passes down generations well, although declining in power in recent decades, while ideological identification does somewhat better than a crapshoot. Thus, the wackos who not only have faith in CAGW but also make family planning decisions on that basis, in America overwhelmingly liberal Democrats, disproportionately will send into future generations fewer voters thinking similarly compared to the parents who have a more realistic understanding of the issue.

This bodes well for conservative policy coming to fruition in the future. Reviewing 2020 presidential vote results and current state government composition, of the 20 states with the highest fertility rates, 18 are red, one is purple, and one is blue. Of the bottom ten, eight are blue and two are purple. Part of this may stem from differences in abortion restrictions, where more liberal states allow more of it and liberal constituencies are more likely to indulge it it; the data demonstrate that without legal abortion the voting power of the country’s black population, comprised mainly of Democrats, after 2010 would have made up 16 rather than 13 percent of the electorate.

Louisiana particularly stands to gain from this deliberate unwillingness to transmit CAGW attitudes. It ranks seventh in fertility rate and its failure to keep pace with the rest of the country in population would have been even starker without a rate a percentage point above the national average. (As well, having only the 19th lowest abortion rate also helped spur depopulation.) The state’s Chicken Littles can don sackcloth and ashes and spend their energies preaching the apocalypse, while saner couples can doff garments and, well ….

It’s a very neat solution to tamping down on the misinformation that attempts to validate CAGW: let its deluded acolytes do the work themselves through self-(non)selection, washing out this attitudes held by future generations by refusing to propagate. And then decades from now the holdouts can be ridiculed into issue preference conversion when the imaginary climate disaster about which they spout senselessly doesn’t come close to materializing.