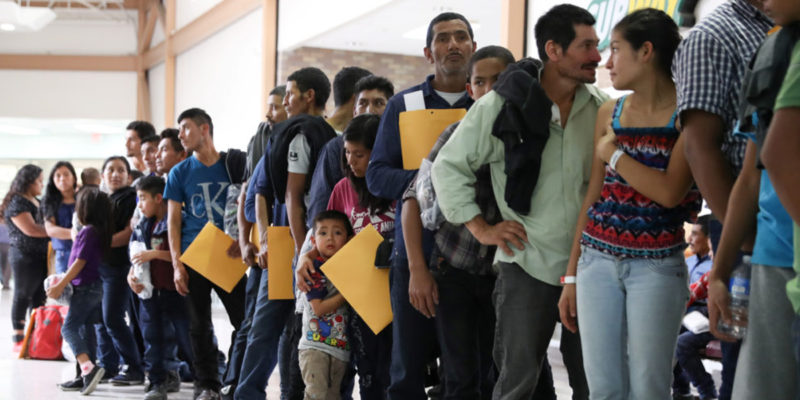 Yesterday we saw something of a three-way, or perhaps four-way, train wreck which might perfectly encapsulate the complete dysfunction of the Biden administration in the summer of 2021.

It’s worth recognizing that in early July, the city of McAllen, Texas, which is located along the Rio Grande not far from the river’s mouth and which has a predictably heavily Latino population (some 85 percent of McAllen voters are Hispanic), elected a Republican mayor.

That election was almost certainly driven by a poor local reaction to the Biden immigration crisis. Except installing Javier Villalobos doesn’t appear to be fixing things, because the federal government is bound and determined to worsen the problem for the new mayor.

A border city in south Texas declared a local disaster this week as it struggles to respond to surging cases of the coronavirus among migrants as thousands are released by the Border Patrol onto the street every week.

Last week, a record-high 7,000 migrants were released in downtown McAllen, where they were immediately tested for the coronavirus through a city contractor. More than 1,500 people tested positive over the past seven days, according to a city document issued Wednesday, compared to a total of 7,000 confirmed cases over the past five months. Those who test positive are told to quarantine for two days but are ultimately released into the public.

The city said in a statement that the “shockingly large number of immigrants” released by Customs and Border Protection into the city overwhelmed Catholic Charities, which provides humanitarian services in the city for migrants. “This significant change increases the threat of COVID spread or other lawlessness within the city,” the city said.

The Catholic Charities shelter downtown has taken in migrants released by federal border authorities for seven years but has never seen numbers like those over the past few weeks. In early July, the shelter averaged 750 arrivals daily, increasing to 1,100, and up to 1,900 per day in the first few days of August. The center is only approved to hold 1,236 people at a time.

“Faced with a rapidly escalating surge of immigrants at the Texas-Mexico Border, the City of McAllen’s Emergency Management Office, in coordination with City Management and in accordance with the Mayor’s Declaration of Local Disaster executed on August 2, 2021, took swift action to begin its efforts to mitigate emergent health and safety risks,” the city wrote in a statement issued Wednesday.

This is the kind of unmanageable crisis which will result in the breaking down of city services, not to mention law and order. McAllen isn’t a big enough, or rich enough, place to accommodate a flood of people like that. Then you add the overwhelming percentage of the illegals who have COVID and it becomes a recipe for abject failure. Villalobos, who won a very close race against the Democrat candidate last month, is doomed at this point unless the voters clearly understand which political party is responsible for creating the circumstances of his doom.

And that isn’t lost on the people who handle Joe Biden, because yesterday they trotted him out to bash states like Texas and Florida for their COVID response since neither state is imposing restrictions on their citizens at present.

Biden singled out Florida and Texas, both GOP-led hot spots that have pushed back against coronavirus restrictions in recent days, which he said accounted for a third of all new COVID-19 cases in the entire country.

The criticism comes as states across the country experience a new wave of infections driven by the delta variant of the coronavirus. The number of hospitalized Floridians reached 11,515 patients in one day on Tuesday, according to the U.S. Department of Health and Human Services.

Both Florida Gov. Ron DeSantis and Texas Gov. Greg Abbott have issued executive orders banning mask mandates despite updated Centers for Disease and Prevention guidance calling for Americans – regardless of their vaccination status – who live in areas of high COVID-19 transmission to wear masks indoors and in public settings.

The president cited Abbott’s order which bars schools, governments and other jurisdictions from implementing mask mandates as “the most extreme.”

Got that? Biden is bringing in thousands and thousands of illegal immigrant COVID patients, then he’s spreading them all across the country on planes and buses, perhaps disproportionally into red states (no study has been done on this, but it’s undoubtedly true if for no other reasons than that more states are red than blue), and then he’s trashing red state governors like Greg Abbott and Ron DeSantis for fighting to keep their states open and to preserve individual liberty.

DeSantis certainly gets this, and did not take very kindly to it yesterday…

Of course, Abbott is in the middle of this same fight. Abbott last week signed an executive order authorizing state law enforcement officials to stop and redirect non-governmental organizations using buses and other means of conveyance to move migrants from the border to other cities and states. That put Abbott in a direct conflict with US Attorney General Merrick Garland, and earlier this week a federal judge granted Garland and the Department of Justice a temporary restraining order against Abbott.

Which most certainly doesn’t end that controversy. Abbott doesn’t seem interested in backing down.

He can’t because the people of Texas are furious over what the Biden administration is doing at the border.

What’s also interesting is that on Tuesday, the CDC reinstated an eviction moratorium which will have the effect of centralizing and nationalizing the rental real estate market, because the millions of small investors who own a giant chunk of the rental market are surely going to be wiped out if they can’t collect rent to chase the mortgages on the property in question. The reinstatement flies directly in the face of a Supreme Court decision at the end of June which held the CDC had no power to ban residential property evictions.

And Biden knew it was unconstitutional when he directed the CDC to go back to that well.

So here’s the question for you – given that blatant and unconstitutional abuse of power by Joe Biden, doing something the Supreme Court had just told him he could not do, why should Greg Abbott abide by that federal judge’s TRO against him interdicting the human trafficking from the border?

Interested in more news from Texas? We've got you covered! See More Texas News
Previous Article You Might Be Interested To See The Letter Mike Johnson Wrote To Merrick Garland…
Next Article SADOW: Just How Bad Is The Bossier City Council? This Bad…