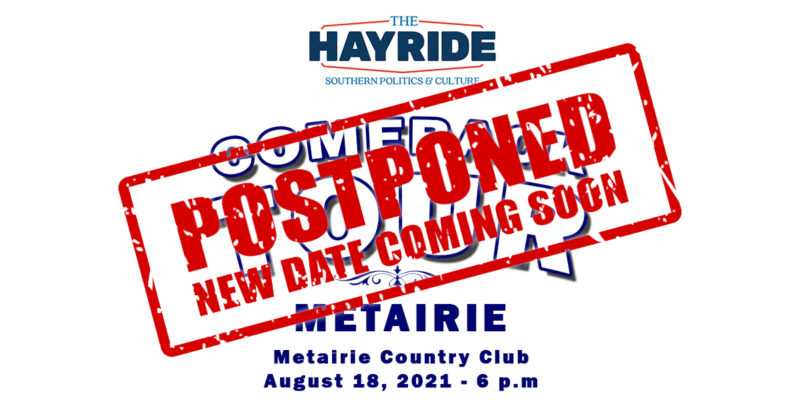 In the face of yesterday’s announcement by Gov. John Bel Edwards imposing indoor mask mandates on all gatherings and so on, we just don’t see how we can put on an event anybody will want to go to. So we’re suspending the Hayride Comeback Tour until we’re no longer encumbered by COVID restrictions and other government mandates.

Principally, that means we’re not going to be putting on our Metairie event on August 18 like we’d planned. We’ll have to try to reschedule that event later in the fall when Edwards has lifted his heavy hand.

When that will be we have no way of saying. We wish it was different, but this is what it means to live and attempt to work in Louisiana these days.

When we announced the postponement of the Metairie event yesterday on social media, we were told by certain respondents, most of whom had never bought tickets to Hayride events, that we ought to defy Edwards and hold the Metairie event anyway.

That’s all fine and well and good, but the thing to understand about these events is we do them to make money. This site makes almost nothing from advertising nowadays, regardless of the amount of traffic it generates; digital advertising networks have declined to near-zero in terms of the payouts to publishers thanks to the manipulation of that market by Google and Facebook. They undercut publishers with respect to rates, so we can’t do much to sell advertising ourselves, and then they chopped the revenue share they pay to publishers.

If you notice how many independent publishers have disappeared from the web over the past few years, now you know why – they can’t make a living. Unless they survive on grant money from non-profits, which is pretty much exclusive to left-wing blogs. There isn’t a whole lot of conservative money out there for independent media outlets like this one. Never really has been.

We settled on event marketing as our revenue lifeline, because Big Tech couldn’t kill that. Then we found out that COVID, and specifically nanny-state governmental abuse of COVID, could. Edwards killed all but one of our events last year and we’ve been holding on for dear life since. We managed to squeeze out a couple of quite-good Hayride events this spring, but we were planning on the Metairie event being the big one.

We were hoping to have it be a blowout event which turned a big profit. We had a really good response from prospective table sponsors we’ve approached, though it was notable that not so many of those verbal “yeses” had translated into actual sales.

We knew why. They were hedging, because they figured Edwards was going to shut it down. And yesterday he did.

And without those sponsors there are no Hayride events. We can’t afford to break even on these. They have to turn a profit. And this event can’t, under the circumstances Edwards has imposed on us.

So we’ll try to wait him out. We don’t even know if that’s possible, because nobody should trust Edwards to lift his restrictions on September 1 when he says he’ll revisit them.

If you’ve bought tickets to the Metairie event and you’d like a refund, contact us and we’ll do that for you.

And while we really would rather not do this, as we’ve never wanted The Hayride to be a charity case, if you’d like to support the site even though we can’t give you much for it while our events tour is shut down here’s a PayPal link available for contributions. We’ll take anything.

We might do an online fundraising event next week, though we’ve never wanted to do much of that. We’d rather sell you something than go begging. But if the governor of the state is going to interfere with that, we’re not being left with much choice.

One thing we would absolutely suggest, though, is that you join us at The Speakeasy, which is The Hayride’s social media app. It’s going to ultimately become much more than that, but for now it’s a great little community where we kick around all the items which show up here, plus lots of other things. Find The Speakeasy here, or you can download it by searching for “The Speakeasy App” at the app store of your choice. There’s a premium option at The Speakeasy which will allow you to access The Hayride’s content ad-free on your device; we know that’s a consideration lots of you will find value in; a Speakeasy premium subscription goes for just $2.99 per month, or $29.99 per year in our money-saving annual subscription option.

For those of you looking forward to our Metairie event, we’re very sorry to disappoint you. We will reschedule it as soon as we can. But as of now, we don’t know when that will be.

Interested in more news from Louisiana? We've got you covered! See More Louisiana News
Previous Article MARSH MAN MASSON: Can We Repeat Tourney Win In Gator-Infested Water?
Next Article SADOW: Might As Well Forget About That 2nd Democrat District