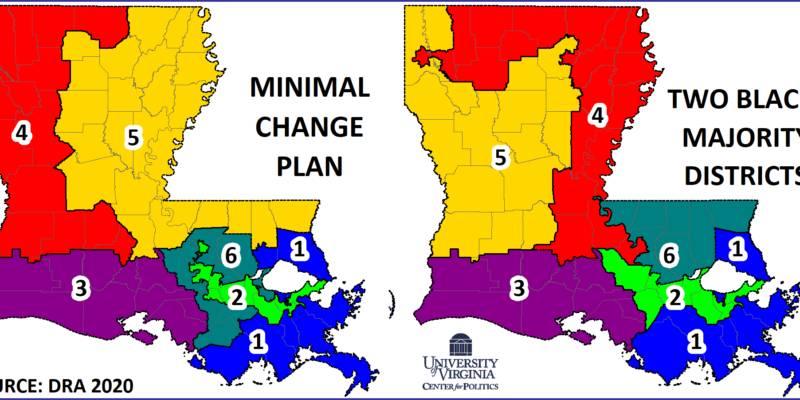 In a couple of weeks the federal government will release 2020 census data, setting states on course for reapportionment. But if as a result you’re a Democrat that begins fantasizing of a Louisiana sending two Democrats rather than one to the U.S. House of Representatives, you might want to stop reading right here.

Because that’s as likely to happen as a child dying of the Wuhan coronavirus. Despite such infinitely small chances, some false cheer along these lines has started circulate. By way of example, one source from the academic left played around with 2019 data used to make population estimates to come up with a map that makes three substantial district-wide changes: it ejects the western-most and eastern-most parishes of Congressional District 5 and extends it south into Baton Rouge while wrapping westward into north and central Shreveport and central Bossier City with its pivot in south Monroe; CD 4 picks up most of those western parishes, what’s left of Shreveport and Bossier City, and northern Monroe and West Monroe; and most of CD 6 shifts into the former eastern-most parishes of CD 4.

This would produce a new CD 5 with a 54 percent black majority as well as have a knock-on effect of lowering the existing CD 2 to 53 percent. The theory then goes both would elect a black Democrat to Congress.

Such an attempt becomes imaginable only as Republicans come up two seats short of a supermajority in the state House, so if straight partisan voting occurs on the state law necessary to create districts unless the GOP picks up votes of two of three no party members or of Democrats, Democrat Gov. John Bel Edwards could veto any plan that largely reflects the current lines that have produced a 5-1 advantage for the party. Democrats can’t make the Republican legislative majority forward a 4-2 plan – in fact, state law doesn’t even address congressional reapportionment, only federal jurisprudence that mandates after a census that drawn districts have a small deviation in population within a state for such elections to be constitutional – so the dream is that the deadlock will force competing plans into the federal judiciary and the courts choose the 4-2 one because blacks comprise about 30 percent of the state’s population.

This won’t happen because of the incredible string of events that would have to occur, beginning with the large likelihood that for its preferred plan the House GOP gets enough votes, and perhaps even from Democrats. Understanding why that is likely requires following the path to its conclusion by imaging entirely unlikely Democrat success every subsequent step of the way.

From the start, three members of Congress would work against such a plan – CD 4’s Republican Mike Johnson, CD 5’s Julia Letlow, and CD 6’s Garret Graves. The arrangement would alter radically all three’s districts, and sitting members don’t like having to deal with big changes to something they have become familiar with and, by definition, had success with. Sitting members can do a lot for their districts and affect the fortunes of state legislators within these. By themselves they probably could twist enough House Democrat arms to produce a plan with minimal change.

But let’s say they don’t and a veto of a 5-1 plan gets sustained, thus the matter piles into the federal judiciary. For one thing, the schedule for this has become a whole lot more compressed because of the pandemic. That will appear to push back any special session for reapportionment to the month prior to the 2022 regular session. In the interim, public meetings about all facets of reapportionment (Congress, state legislature chambers, judiciary, Board of Elementary and Secondary Education, Public Service Commission) will occur.

A session that fails to produce a plan by the middle of March only then could start a legal journey, but even that might get delayed as (presumably Republicans) could argue the matter could be settled during the regular session, which won’t end until early June. So, the courts may have a matter of only two months to review the matter prior to qualification.

Naturally, the state (Edwards will refuse to participate, but probably any of Republican Atty. Gen. Jeff Landry, GOP Sec. of State Kyle Ardoin, and/or the legislative leadership) would challenge this. And appeals would be involved. Which means the path of least resistance for the courts, given the tight timeline to prevent disruption of election administration, would be to approve the existing boundaries for 2022 only while in the background, they wrestle with drawing their own plan.

But let’s say that the judiciary, all the way to the U.S. Supreme Court, very quickly sides with a plan in time for 2022. Chances are extraordinarily high that it would be a 5-1 plan, because a 4-2 plan appears unconstitutional on its face as reapportionment must apply a standard of strict scrutiny when done with race as the primary reason – and a 4-2 plan packing as many blacks into making small majorities in two districts blatantly forwards race as the dominant criterion.

The series of Hays v. Louisiana cases built upon this jurisprudence exposes the constitutional infirmity of a 4-2 plan. Then, defenders of a similar plan – although the current example has a higher degree of compactness – presented a series of weak justifications that the Supreme Court found well short. The example plan particularly runs into problems in its putting to the sword the “communities of interest” standard that a 5-1 plan pursues.

Put another way, it is difficult to argue that sections of Shreveport and Bossier City have much commonality with a part of Monroe 100 miles away, or that this part has much to do with a piece of Baton Rouge 200 miles away, which lies 250 miles away from the Shreveport and Bossier City segments all supposedly part of a “community” with similar interests. But is it impossible to argue that a racial gerrymander hasn’t occurred at great offense to splitting communities with similar interests when you create an adjacent district that also strings together different parts of Shreveport. Bossier City, and Monroe into one. The courts never have allowed anything like this – even Louisiana’s current splitting up of New Orleans and Baton Rouge across multiple districts doesn’t place both cities together in adjacent districts and it seems highly unlikely that the present Supreme Court would permit such an obvious racial gerrymander.

But let’s say it does, in time for 2022 elections. The chattering classes assume this new district would open up for a Democrat while pitting current Johnson and Letlow against each other. However, keep in mind that the new CD 5 doesn’t have that much of a black majority, as well as Letlow still would reside in it (of course, that’s not a constitutional necessity to run in that district). She ran strongly in the special election and she would be very competitive within the new boundaries, which in terms of geography around half under the old boundaries would be in. She could win it.

And she likely would try rather than go up against Johnson, because if this highly unlikely series of events occurred, regardless of the 2022 election outcome she almost certainly gets her old district back for 2024. The Supreme Court has ruled a state may reapportion at any time, and so with the near-certainty of a Republican governor in 2024, the legislature simply goes back to a 5-1 plan.

Returning to the first step in this process, the 2022 reapportionment session, no party members or Democrats in the House will know all of this, and how extraordinarily unlikely any 4-2 plan would make it to 2022, much less beyond that. So, the rational thing for them to do is trade their vote, knowing to vote with Edwards beyond doubt will bring them no partisan or any other benefits while GOP Speaker Clay Schexnayder will pony up some carrots (or maybe brandish some sticks) for it. In reelection and influence terms, it’s much more valuable to deal away than to cast it for Edwards.

And that’s what almost certainly will happen, but regardless of how it all plays out the state for 2022 will wind up with a map not much different from the current. If you want something different, don’t get your hopes up for that pipe dream.

Interested in more national news? We've got you covered! See More National News
Previous Article Runaway Texas Democrats Arrested In D.C. While Others On ‘European Vacation’
Next Article Defunding The CDC Needs To Be On The GOP Agenda For 2023