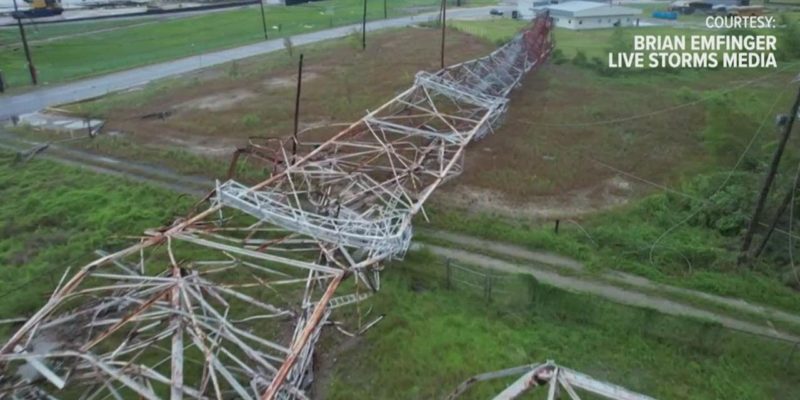 Fortunately, Hurricane Ida largely spared New Orleans from destructiveness of life and property. Unfortunately, New Orleans didn’t save itself from its own politicians’ stupidity in the aftermath.

The entire city plunged into the dark after the storm made landfall, with the only power coming from generators. This included Sewerage and Water Board pumps needed to keep flooding at bay. While power likely will become available within the next few days for the majority of the city, some areas, mostly outside the parish, could take much longer.

The southeastern area of the state, through which Ida ripped, saw about a million customers lose power. Transmission line failure caused this, with Orleans comprising the plurality of people affected. Yet Orleans is exceptionally vulnerable to this because of deliberate policy decisions made by politicians chasing an unnecessary and expensive goal.

The city’s recently-adopted “Renewable and Clean Portfolio Standard” commits to zero carbon emissions in city power generation used by 2050. Its provider Entergy New Orleans had signaled acquiescence if not enthusiastic agreement as it has placed increasing reliance on renewable energy sources. It boasts of reaching 70 percent by 2030 and notes it has hit 50 percent, crowing that this is above the national average, while having emissions half of the national average.

But its plan departs from the city’s in two crucial ways: it would continue to use natural gas to substitute for ending use of coal that renewable forms couldn’t and it would only go to 70 percent which it says would hardly increase rates, whereas going all the way it says would boost these 65 percent. However, the city blueprint keeps the linchpin of Entergy’s strategy of including nuclear power.

So, that would mean letting the only large local generator go through its life cycle to abandonment, the controversial gas plant which for peak periods provides up to 128 MW, as well as greater reliance on transmission from areas creating power only through nuclear, solar, wind, and hydroelectric means. All have to be imported by transmission lines — an exceptionally vulnerable linkage as now has become all too obvious.

The first power coming to New Orleans will emanate from the Michoud gas plant, and from there Entergy will try to get it in indiscriminate form from elsewhere. Had the net zero standard been in force now, restoration of power would have taken significantly longer not only because the Michoud facility wouldn’t be available, but also because of bottlenecks in the transmission grid going through the regional power cooperative serving the area, the Midcontinent Independent Service Operator, into getting power exclusively from renewable energy.

In a disaster like this, to which New Orleans ins especially exposed, this become vastly magnified because the city has so little access, for geographic and policy reasons, to locally-generated power. Gas-running generators attached to individual customers (of which the running the pumps is the biggest, where Entergy provides power when S&WB reaches capacity using its own resources) only work under these conditions; local renewables obviously don’t.

Because of the one of the primary problems of renewable energy forms, namely the lack of storage capacity of already-generated power, this makes critical having transmission greatly enhanced over current levels. Yet this uncovers the other primary problem facing renewables, because this enlarged capacity doesn’t exist and is ruinously expensive to achieve. The projected cost on a national scale not only far exceeds that carved out for the task in the recent half-trillion-plus dollar spending bill being rammed through Congress by mostly Democrats (with the ill-advised assistance of Louisiana Republican Sen. Bill Cassidy), it is about as much as the bill itself.

Thus, recently New Orleans joined some other states in MISO pledging to spend to increase transmission capacity to match, which the Louisiana Public Service Commission (almost all of the state is in MISO’s footprint) wisely refused to endorse. It’s a bad deal for most ratepayers, who will have to absorb the costs (what they would pay in addition to higher taxes to back the federal bill’s spending) with the benefits disproportionately accruing to jurisdictions like New Orleans committing to renewable sources.

Therefore, if sticking to the plan, New Orleans will suffer more incidents like this as lesser storms will provoke as bad or worse outages, given the unreliability of the city’s preferred power sources and difficulty in acquiring and transmitting that power from elsewhere, unless technology improves and rates paid by the city’s residents rise dramatically. All sacrificed on the altar of climate alarmism that bears no relationship to reality. The idiocy of New Orleans elected officials on this issue ensures the city stays stuck on stupid.

As an aside, if you want to see just how much expertise New Orleans’ City Council, which regulates Entergy New Orleans, has to offer on the subject of power generation and transmission, here is City Councilwoman Helena Moreno being interviewed by WWL-TV about the city’s post-storm power outage.