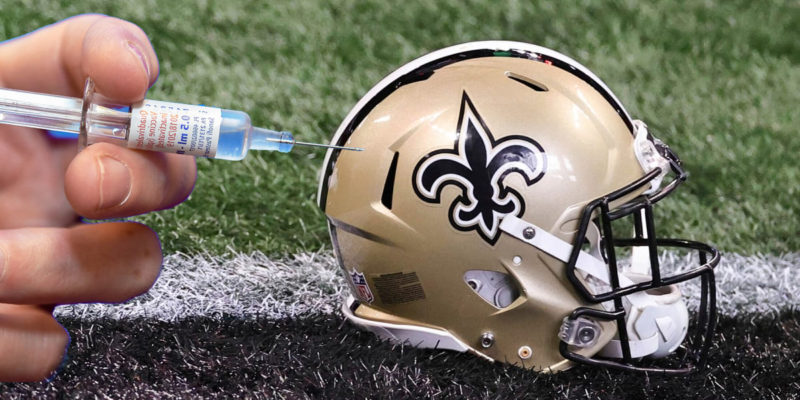 Yesterday we had a post about the untenable position the New Orleans Saints had taken on what to do with ticketholders who can’t or won’t comply with New Orleans mayor LaToya Cantrell’s oppressive vaccine passport policy for attendance at home games.

Cantrell is requiring people in Orleans Parish who want to live their lives to show proof of vaccination or a negative COVID test less than 72 hours old in order to be able to enter any business or public building, something which is almost inconceivable from a constitutional standpoint and surely will be thrown out by a court of law sooner or later. But until it’s negated in court the Saints, like every other business in town, are stuck trying to figure out how to enforce it.

But the team’s initial efforts at compliance were a swing and a miss, as they refused to put a ticket refund or opt-out policy in place. This would have resulted, essentially, in the confiscation of money paid to them by ticketholders who for whatever reason refused to comply with Cantrell’s mandates.

There are two issues here. One is that you can’t take someone’s money for tickets based on a normal set of conditions, and then keep that money when the conditions change to such an extent that the ticketholder no longer wishes to attend. It’s a breach of contract, essentially.

The second issue is that a refund policy isn’t enough. You also need to give people the ability to opt out while at the same time retaining their ticket priority for future seasons. Meaning that if you have seats on the 40 yard line and your decision to forego the vaccine puts you out of the Superdome, you should be able to get a refund and still have the option to sit on the 40 next year.

From a practical standpoint this is less of an issue than meets the eye, because those ticketholders who refuse to take the jab will just put the tickets on StubHub and get their refund that way. But as a matter of law and policy it still matters.

Which is why Louisiana Attorney General Jeff Landry raised a stink about it and said he was going to seek to hold up improvements to the Superdome until the Saints made good on a refund policy.

This morning, the Saints reversed themselves, at least a little…

The New Orleans Saints are grateful to have received all the necessary approvals to host a full capacity crowd at the Caesars Superdome this season. The Saints earned the No. 1 ranking in the NFL in Health and Safety in 2020 and are following the state and local protocols for our fans to safely attend games this season.

While the city is not exclusively requiring a full vaccine for entry it is requiring either proof of a single vaccination dose or a negative Covid-19 test for our fans to attend the game (fans that are 12 and under do not need to provide any proof of vaccination or negative test result). The City of New Orleans will permit fans to enter the stadium even if they receive their first Covid-19 vaccination shot on the day of the game. The Saints will be teaming with Ochsner to provide free Covid-19 vaccinations at the Caesars Superdome for fans who wish to choose this option. Once the city ordinance was announced, the Saints/Ochsner regional vaccination program produced nearly 2,000 newly vaccinated citizens within one week. We want to thank the health care professionals who assisted on this program and all health care workers on the front lines who are fighting this disease every day. They are our true heroes.

We are hopeful that the city mandate is temporary and we remain optimistic that as vaccination rates increase this policy will no longer be necessary.

We appreciate the overwhelming positive feedback we have received from our season ticket holders to be a part of a full capacity Caesars Superdome. We have the best and loudest fans in the NFL and they will be counted on this season.

Last season, we made the decision to offer refunds or rollover accounts to the following season because we knew government regulations would not allow us to fulfill a full season of attendance. This is not the case this season. Based on current city and state regulations allowing full capacity, we did not plan to offer refunds for season tickets, as has been our standard policy. We have received less than 120 requests for ticket refunds as of Thursday morning and, following media inquiries and recent articles about refund policies, we have received thousands of calls from interested fans wanting to purchase any season tickets made available by current season ticket holders seeking refunds.

Our preference is to have these loyal fans in the seats rather than see these additional tickets be made available to visiting fans via the secondary market. Those seeking a refund should reach out to their ticket representative by the deadline of Tuesday, Aug. 24 at 4 p.m. CT. At their request, we will cancel their accounts and provide a refund. Those tickets will then be immediately offered for purchase to our wait list. Every effort will be made to expedite this process due to the start of the home season next week. Further details regarding the refund policy will made available to those seeking a refund through their ticket representative.

The problem with this is there doesn’t appear to be an opt-out. They’re talking about canceling accounts, which means if you ask for a refund you will then lose your seat placement if you come back next year.

At the Bond Commission this morning, essentially the Superdome upgrade projects were put off until the September meeting. That wasn’t quite what Landry wanted, but at least the effect is there is some leverage on the Saints to handle the non-vaxxed season ticket holders with some respect.

But if visiting fans are sitting in those seats because the Saints didn’t offer an opt-out, the Saints have nobody to blame but themselves. And if they don’t provide an opt-out and the Bond Commission proves less than enthusiastic about throwing more taxpayer dollars into the Dome, well, that’ll be just too bad, won’t it?