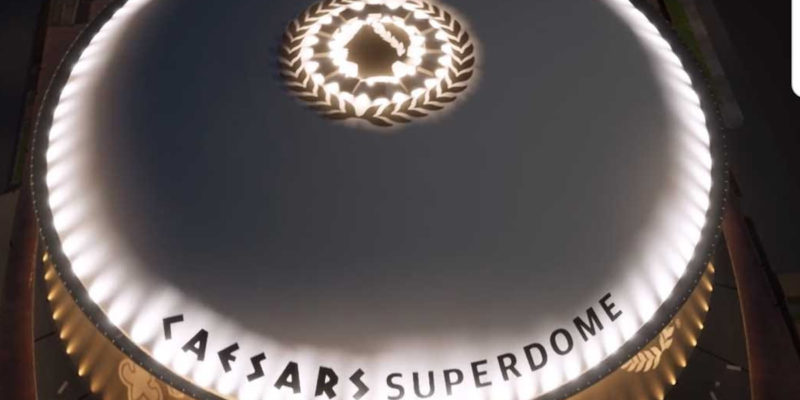 …and that’s really something, isn’t it? Where are the Take ‘Em Down NOLA communists on this?

Caesars Superdome will host all Saints home football games, and Super Bowl LIX to be played in February 2025. The building will also host the 2022 NCAA Men’s Final Four, the annual Sugar Bowl and College Football Playoff contests, a variety of concerts and hundreds of other annual events including Essence Festival, the Bayou Classic football game between Grambling State and Southern University, the New Orleans Bowl and the Louisiana State High School Athletic Association Football Championships.”All of us at Caesars are proud to be part of New Orleans’ vibrant culture. We understand that the Superdome is more than an iconic venue, it’s the symbol of a resilient and innovative community,” said Tom Reeg, CEO of Caesars Entertainment. “We’ve had a strong relationship with the New Orleans Saints for nearly two decades and we are thrilled with the opportunity to strengthen it and celebrate our commitment to the city, the state, and the entire Gulf Coast region.”

In the last five years, Caesars Entertainment has led with its heart in the Pelican State, giving more than $30 million directly into community non-profits and services.  Through a combination of volunteer hours, grants from the Caesars Foundation, and donations supporting local non-profit programs dedicated to disadvantaged populations, tourism, and infrastructure, Caesars remains committed to the state of Louisiana and its residents.

Caesars Superdome will stand as testament to Caesars’ commitment to the New Orleans Saints and to the city of New Orleans as it embarks on a $325 million renovation to transform Harrah’s New Orleans into Caesars New Orleans.

“This partnership sends a strong message about the positive future for the New Orleans Saints, Caesars Entertainment, and the entire state of Louisiana,” said Saints Owner Gayle Benson. “That message states that companies with the global reach of Caesars Entertainment is investing in our city, state and region. Caesars has long been one of the world’s most respected entertainment companies. Caesars is in the midst of creating a first-class multi-million dollar entertainment facility in downtown New Orleans, this significant investment also demonstrates the strength of their commitment to our state and region. We are proud to partner with a company that is dedicated to the economic growth of our city, state and region.”

The agreement between the Saints and Caesars Entertainment represents a union between two iconic companies and brands that are built on creating economic growth in their communities.  Both are engaged in spearheading expansive projects, which will help spur significant economic growth for the state of Louisiana and the entire region.

“Having faced a very trying 2020 with the Covid-19 Pandemic, this is wonderful news to see that two iconic brands like the Saints and Caesars are partnering on a long-term business deal that will not only benefit New Orleans, but the entire State,” said Louisiana Governor John Bel Edwards. “I congratulate Mrs. Benson and her team on securing this partnership. The Superdome is an iconic building, globally recognized and I am certain that Caesars will be very pleased having their name on the building that will be hosting future Super Bowls, Final Fours, and Essence Festivals, to name a few.”

Let’s make something perfectly clear: we’re not offended in the least that the Superdome is going to be, at least for the next few years, named after Julius Caesar – or at least the Las Vegas corporate gambling persona of Julius Caesar. It is what it is. We think it’s a damned shame that Louisiana’s putrid economy isn’t capable of generating a local company with the financial resources and branding strong enough to support a winning bid for naming rights, and instead it’s a Las Vegas corporation which is moving in to establish hegemony on the local gambling scene which is branding New Orleans’ most iconic venue, but it’s not like we oppose it. Caesar is paying his money down, and so we give unto Caesar what is Caesar’s.

But the communist mob which insisted on defenestrating many of New Orleans’ other iconic monuments, including the one to Beauregard who was legitimately a local hero and, during a brief sojourn into New Orleans politics actually tried his hand as a civil rights leader, doesn’t seem to have a problem with Julius Caesar. We gave this close to three weeks waiting for the imbecile communist Malcolm Suber and the white leftists who fund and control him to raise a stink about it…and, nothing.

Caesar is the most celebrated figure of the Roman Empire, which was quite possibly the most prolific enslavement engine in human history. As much as 40 percent of the population of Italy was enslaved at one time; in fact, throughout the Roman empire there were more slaves (5 million) at the height of the imperial era than there were in the American South (4 million) at the outset of the Civil War.

And Caesar didn’t just own slaves. He didn’t just trade them. He actually made slaves. Upon conquering one province in Gaul he enslaved 53,000 people in a single day. On the spot he turned 53,000 men, women, and children into chattel.

That’s worse than anything Lee, Beauregard and Jefferson Davis did, so you’ll know.

Oh, but those guys were confederates and they were traitors, right? Well, Caesar crossed the Rubicon, didn’t he? He used military force to essentially dissolve the Roman Republic and make himself a dictator. Caesar was assassinated by members of the Roman Senate because they were afraid he was going to impose a bloodthirsty tyranny upon them.

Honestly, you can’t castigate Robert E. Lee and P.G.T. Beauregard as unworthy of memory and not object to Julius Caesar.

Unless you’re Malcolm Suber and the Take ‘Em Down NOLA communists. Then you can.

Why do you think that is?

A couple of observations to explain that.

First, since most if not all of the people Caesar enslaved were white Europeans, Malcolm Suber couldn’t care less about them. Enslaving white Europeans was something that had gone on long before Caesar and it went on long after that. As late as the early 19th century brown-skinned North Africans, be they Moors, Turks, Arabs or others, took to the seas in the Mediterranean and Atlantic to stage raids on coastal towns in Italy, France, Spain and even in England and Ireland to cart off white Europeans as slaves. Many European countries paid those corsairs a jizya, or a bribe, in return for their forbearance in enslaving their people. And of course the Turks build much of their economy on the taking of slaves from southeastern Europe. The word slave is derived from Slav – the Slavs were and are the dominant ethnicity in southeastern and eastern Europe.

And of course, six decades later America would spend 600,000 lives in a civil war to end slavery. Lee, Beauregard and Davis were on the wrong side of that conflict, it’s true, but again – why only be upset about their exploits and not those of Caesar?

Which brings us to the second observation, which is that the Malcolm Subers of the world aren’t social justice warriors so much as they’re anti-American psychopaths. They probably don’t give a damn about white people who get enslaved, but they also don’t give a damn about black or brown or yellow people who get enslaved, either. Malcolm Suber couldn’t spell, much less pronounce, Uighurs, and given that he’s an avowed Maoist it would be hard to imagine he cares very much about the brutality and enslavement the Chinese government currently practices against those beleaguered people.

And seeing as though there are to this day active slave markets trading in black people in those same places the Barbary corsairs used to sail from, you’d think Malcolm Suber would get bent out of shape about that and want to do something about it.

It’s only bad things which happened in America that Malcolm Suber cares about. Lee has to go, but Caesar’s good to go.

We’d just like to see some consistency from the professional bitches like Suber. And of course there is none. Hopefully someone will take note of that and remember it the next time he opens his anti-American grifter mouth to trash our history and culture.

Interested in more news from Louisiana? We've got you covered! See More Louisiana News
Previous Article SADOW: The Science Is Not On The Side Of Louisiana’s Climate Alarmists
Next Article BAYHAM: A Two-Tiered COVID Tyranny Is Coming To New Orleans