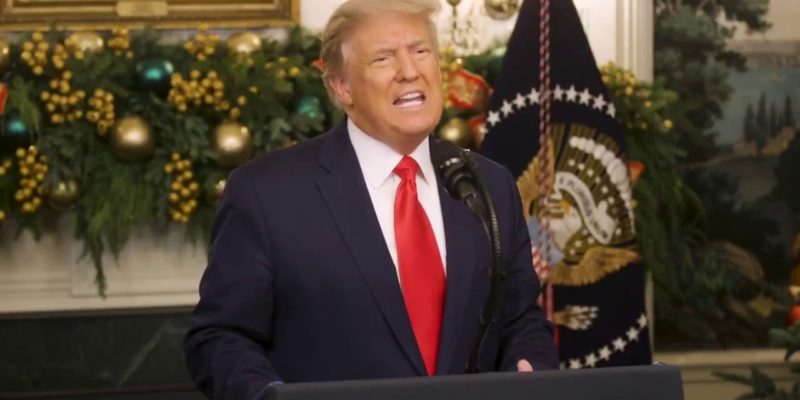 President Donald Trump is the most popular Republican in the country. In a recent opinion poll, he trounced every other contender for the 2024 GOP nomination. Unfortunately, the next presidential election is three years away and we cannot wait that long to save America.

In their first eight months, a despotic President Joe Biden and crazed congressional Democrats are attempting to destroy the country. Biden has become the most tyrannical and divisive President in our history.

Ironically, during the 2020 presidential campaign, candidate Joe Biden excoriated Trump for being too divisive. He promised to unify America while working with Republicans and Independents.

Biden was inaugurated after a disputed election. In our divided country, Democrats won a bare majority of congressional seats, while Republicans controlled more state legislative seats and governorships.

The President received no mandate for socialism; nevertheless, he has acted like he won widespread support for his radical agenda. After his election, he abandoned his pledge of unity and began to amass unprecedented presidential power.  For example, Biden signed a record number of executive orders, circumventing Congress, while attempting to erase the Trump legacy.

Biden canceled the Keystone XL pipeline, while removing sanctions against a Russian pipeline, and then stopped oil and gas leasing on federal lands. Thus, Biden made our country energy dependent again and recently had to beg OPEC to increase their production.

The result has been predictable as gasoline prices have soared, as have costs for groceries, home improvement products and other items Americans need. With renewed inflation, it is no surprise that the economy is struggling, as the last labor report indicated.

Biden halted construction of the Trump border wall and welcomed into the country a record number of illegal aliens. These individuals are not being tested for COVID-19 and are being sent all over the nation. Biden supports this invasion, even though millions of Americans are terrified of the many difficulties that will result.

With a weak economy and an influx of illegal aliens, crime is surging, particularly in America’s urban areas. Sadly, the President has displayed little support for law enforcement. As the number of police officers decrease, the number of criminals is increasing. In response, all Biden and the Democrats offer is more gun control.

Regarding the pandemic, his policies have failed as infection levels rise. His scapegoats are 80 million unvaccinated Americans, and his antagonism toward them reached a disturbing level last week. He ordered federal government agencies and businesses with over 100 employees to require their entire workforces be vaccinated against COVID-19. This will not only increase business costs, but it is also clearly unconstitutional. Several GOP Governors pledged to sue the President to stop this tyranny.

This edict contradicts a commitment Biden made last December to forgo a mandate and only encourage Americans to take the shot. Also, CDC Director Rochelle Walensky and Dr. Anthony Fauci promised that a vaccine mandate would not be implemented. House Speaker Nancy Pelosi claimed such a mandate could not be done for “privacy” reasons.

For once, Pelosi was right, it is no one’s “business” who is vaccinated. The mantra of “my body, my choice,” is inapplicable to abortion, when another life is involved, but it should apply to whether a person is forced to take a vaccine that may produce severe side effects, including death.

Americans must have medical privacy and be allowed to refuse a vaccine for personal reasons. One compelling justification to decline vaccination is that natural immunity is more robust than vaccine immunity. An Israeli study indicated that recovery from the Delta variant of COVID-19 offered individuals “considerably more” protection than the vaccine. Even Dr. Fauci admitted in a recent interview that he had “no firm answer” why Americans with natural immunity needed the shot.

While excoriating the unvaccinated, Biden refuses to condemn the Taliban, which recently added known jihadists to their cabinet, that was installed on 9/11. Amazingly, his administration labeled these terrorists “business-like and professional.”

The Taliban killed 2,400 American military service members during the 20-year Afghanistan war. This number increased by 13 on August 26 when their “security” at the Kabul airport allowed a suicide bomber to attack.

Incredibly, Biden removed our military from Afghanistan while Americans were still being held hostage. This contradicted his pledge to stay until every American was freed. Instead, their fate will be determined by jihadists.

America is suffering in innumerable ways, so we must act quickly. The best way to respond is for Donald Trump to become Speaker of the House once the GOP gains control of Congress in the 2022 mid-term election. Their rules allow a non-member, like Trump, to be elected Speaker.

Only Trump has the clout and courage to effectively pursue impeachment charges against Biden and Vice President Kamala Harris for their many offenses against the American people. They deserve impeachment much more than President Trump did for making a “perfect” phone call and for a protest in which one of his supporters was killed.

Biden left American hostages in the clutches of the Taliban, breaking his promise. In a phone call to the Afghanistan President, Biden encouraged him to lie. Unfortunately, only a few congressional Republicans, such as Marjorie Taylor Greene of Georgia, are pursuing articles of impeachment against Biden.

Clearly, House Minority Leader Kevin McCarthy is weak and lacks the fortitude to impeach Biden and Harris. In contrast, Trump would not flinch. If impeachment and conviction of both Biden and Harris are successful, House Speaker Donald Trump would assume the presidency. If not, he could still run for President in 2024 after challenging the Democrats in a meaningful way.

Americans cannot wait until the presidential election; we need to stop this tyranny in 2022. The only person we can trust to deliver the change the country needs is Donald Trump.

House Speaker would be a great addition to his resume. He would be the second American to serve as both Speaker and President, but the first one in 166 years. He would make history while, simultaneously, saving the country.