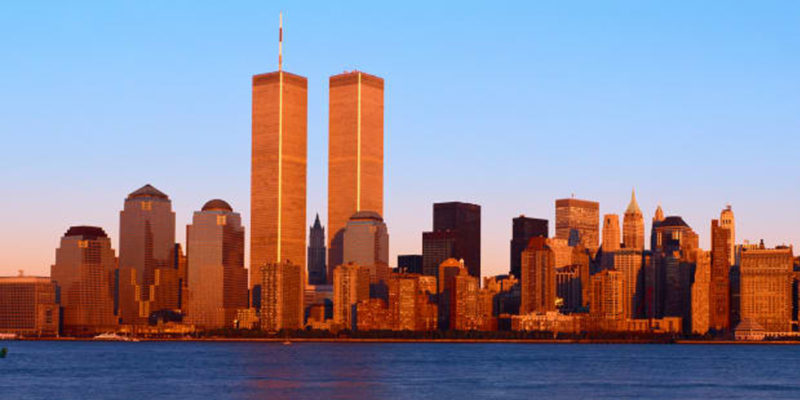 For the first time in my life I was gazing across the Hudson River looking at the spectacular visual that is Manhattan.

From Ellis Island, it appears as if a forest of skyscrapers are on a barge. Though every large city in America has tall buildings no other has as many as New York.

And dwarfing all of the other residences and office edifices sprouting up towards the clouds were the enormous near identical pair of 110 floor buildings known as World Trade Center Buildings 1 and 2.

Lacking the legacy of the Empire State Building, the ambiance of 30 Rock, and the art deco beauty of the Chrysler Building, the imposing Twin Towers represented function over form. Though monumental in size they were first and foremost a place of business, though they possessed some popular amenities that attracted tourists including an observation deck on one and the Windows on the World restaurant on the 107th floor in the other.

Eventually I would make my way over to the World Trade Center that week on what was a foggy day.  But I still wanted to go up the elevator to the top and struggle to take in some degree of a view, if not looking out across the lower Manhattan skyline then straight down towards the streets and the roofs of other skyscrapers that were not as tall.

But that would be later as a trip to the WTC would be crammed into a full itinerary of popular New York destinations, from Broadway to the Guggenheim.

On this sunny day while standing at the famed point of disembarkation for immigrants leaving the Old World and aspiring to be a part of the new one, I decided to have the moment of my first look at Manhattan captured for personal posterity on a Kodak 35 mm flip camera.

Finding a fellow tourist in the vicinity I asked the obliging visitor to be sure to get the southern tip of Manhattan in the shot, especially the two giant buildings that stuck out, serving as the double exclamation points that underscored precisely how large NYC truly is.

But there was something else to them.

Before there was 9/11 there was February  26, 1993 when Islamic terrorists attempted to blow up the foundation of the North Tower (1) via a moving van parked in the basement garage packed with explosives and send it tumbling into the South Tower (2) like dominos. Though the bomb was successfully detonated the intended explosion failed to trigger the collapse, though six people were killed in the bombing.

I hadn’t forgotten about the attack and their existence was a  sign of defiance to radical Muslim terrorists.  Apparently I wasn’t the only one who thought the same thing as taking down the skyscrapers would become an obsession for an Islamist terrorist network.

At the very moment I was admiring the Manhattan skyline the 9/11 terrorists were enrolled in a flight training school in Florida preparing their plot to forever alter it.

It would be weeks later before I used up all the exposures on the film roll and would discover that the stranger muled into snapping the image had succeeded in taking what would become a very important picture for me.

The question of “where were you?” during a particular traumatic moment in history has been asked for generations of Americans.

Our grandparents could recount where they were when they heard Pearl Harbor was bombed by the Japanese.

Our parents recall where they were when they learned JFK was fatally shot in Dallas.

But those instances were from relays of reports as there wasn’t a live-feed broadcast of those tragic events.

That would change with advances in communication technology.

For Generation Xers our big tragedy was the Space Shuttle Challenger explosion because it was the perfect storm of audience and the means of transmission.

Classrooms in schools across America were watching the launch in real time due to the presence of teacher Christa McAuliffe on board the doomed flight.  There was no buffer; just the explosion as it was, with educators having to interpret on the spot what had transpired and manage the reaction of adolescents who had not been exposed to a calamity of this nature.

Taking place in the media capital of the nation at an hour when the morning news shows, all based in New York, were airing live programing, the 9/11 terror attacks would shake the nation in suddenness, scope of destruction, disturbing visuals that would play out over an extended period, and death toll.

The coordinated four jet hijackings and intentional crashes would also generate a national panic as rumors of other attacks (including circulated stories about car bombings in one of the NYC tunnels and at the State Department) spread as the full story wouldn’t be known until later.

With so much unknown, fear reigned and New York City became paralyzed as people wondered what else could possibly happen that dreadful day. Commuters from New Jersey would slog over bridges on foot or leave the island via boat as black and gray smoke billowed forth from the southern tip of Manhattan where two large buildings had stood earlier that morning.

Before the sun set that day the date September 11th would be forever burned into the national psyche, joining December 7th and November 22nd as days that will live forever in infamy.