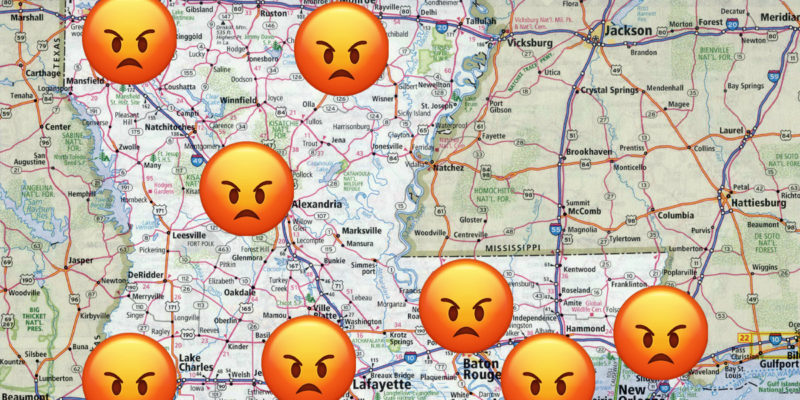 In Louisiana, our governor is now in his sixth year in office. How are we doing with him at the controls?

Badly, it turns out. Very, very badly. And we aren’t happy about it.

The survey site WalletHub has just released the results of its “Happiest States in America” rankings, and, well…

You can certainly quibble with WalletHub’s formula. While Utah as the happiest state does seem to make sense given the criteria WalletHub is using, factoring things in like “Emotional & Physical Well-Being,” “Work Environment,” and “Community & Environment,” and you can even see Minnesota and Hawaii landing in the top five; Hawaii is nothing but mountains and beach and it’s one of the most beautiful places on the planet, while Minnesota’s always been the kind of place Democrats think they can turn all of America into if they can just grow government big enough.

Either way it isn’t all that big a surprise Louisiana is at the bottom. We’re 48th overall, but we’re #50 when it comes to “Work Environment,” and we’re 44th in “Emotional & Physical Well-Being.” Even in “Community & Environment,” which you’d think Louisiana would do very well in considering that four out of every five of us were born and raised here and we put so much passion into things like local sports, festivals and the like, we’re only 28th.

Even Mississippi beats us. We’re only ahead of Arkansas and West Virginia. Frankly, we’re not sure it’s all that much of a slam dunk with Arkansas, either, since if you’re comparing UHaul rates for a 10-foot truck on an October 1 rental it’s $720 to drive one from New Orleans to Little Rock and just $335 the other way.

That wouldn’t suggest Louisiana is happier than Arkansas.

It wasn’t all that long ago that Louisiana ranked as the happiest state in the country. It was a different survey than the one WalletHub does, but in 2009 we held the title of the happiest.

Now we’re just about the most miserable.

This place needs some changes, y’all. They won’t happen until you start becoming unruly and rude in demanding them, because the political leadership of this place, and particularly that hillbilly caudillo in the governor’s mansion, really couldn’t give a red hot damn.