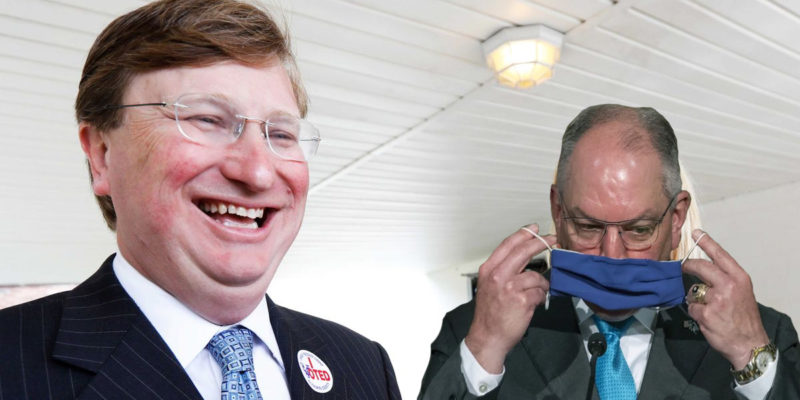 The punchline often quoted, out of relief, by Louisianans about Mississippi has gone flat as far as higher education goes.

Conscious of their place as one of the least economically and socially backwards among the states, Louisianans traditionally have reverted to gallows humor to commemorate that distinction. The joke takes a variety of forms, but it always invokes Mississippi as a foil as to a worse place to be. For example, it might take the form of “We might be among the nation’s leaders in unemployment, poverty, and overall health, but at least we’re not Mississippi where they’re just now getting indoor plumbing.”

But recently the Board of Trustees for the Mississippi Institutions of Higher Learning decided the state’s eight public universities can’t mandate a Wuhan coronavirus vaccine for enrollment or employment at these institutions. It actually stipulated the policy in August, but some confusion over the motion to do so and the language of the measure in its minutes prompted a restatement. It allows an exception for health care-related employees and students.

The Board governs all policy and financial oversight of the schools. The Mississippi Community Colleges Board does the same for the state’s 20 junior institutions, but has remained silent on the issue as have the schools it oversees, apparently taking their cue from the IHL. Members of both boards are appointed by the governor with staggered terms with state Senate confirmation; all have been selected by a Republican governor and confirmed by Senates with GOP majorities.

Science is on the side of this enlightened decision. Vaccines don’t prevent virus spread, and in any event increasingly appear as temporary and as increasingly ineffective across multiple variants as with influenza – yet you don’t see the hysteria about vaccination for that which, sadly the case, is just about as deadly as the virus, especially when considering most age groups are more at risk from the flu than the virus. Bluntly, the only person protected by a vaccination is the one with it, and a vaccine passport policy does nothing to ensure the safety of the public while, of course, imposing onerous bureaucracy and one-size-fits-all overreach interfering with people’s personal lives and autonomy.

That action just screams to the world the backwardness of Louisiana and its higher education institutions, demonstrating how political fashion takes precedence over academics – if any government institution should be following the science, it’s higher education – but predictably so since all the members of these were appointed by Democrat Gov. John Bel Edwards. And Edwards, in order to empower government as much as possible, adheres to the fig lead of the zero COVID fantasy as a means to justify granting greater power to government at the expense of liberty, a pipe dream which demands aggressive state vaccination regimes.

So, the joke has turned sour on this issue with Mississippi’s reasoned approach. We can’t even have a laugh to distract us from the continued drive to failure emanating from the Governor’s Mansion on down.