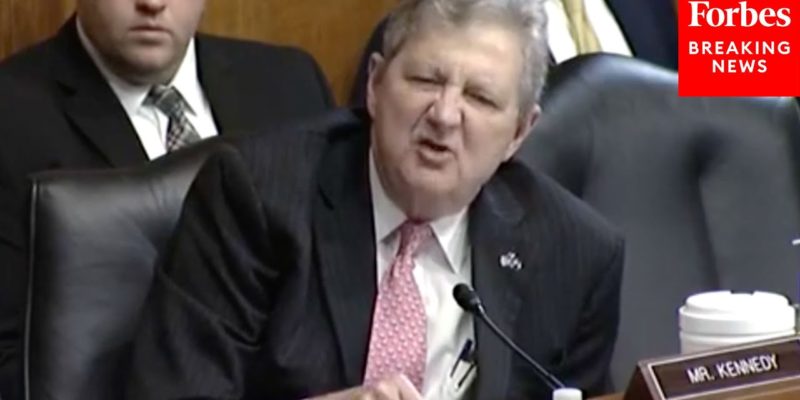 There was a confirmation hearing at the Senate Judiciary Committee yesterday and while it’s likely the nominee will end up on the Ninth Circuit Court of Appeals, she’s almost certainly going to take her seat on that court with half her backside missing.

You can thank Sen. John Kennedy for that.

Kennedy got hold of a 2018 letter signed by Jennifer Sung along with dozens of other leftist alumni of Yale Law School which castigated then-Supreme Court nominee Brett Kavanaugh as a “morally bankrupt” individual on the basis of what turned out to be fraudulent accusations made by the fabulist Christine Blasey Ford. He decided he’d use his time to drag her through a forest of broken glass over that letter, and Sung had no good answer for it.

Sung didn’t write the letter. But she signed off on it. And it was pure politics, because Jennifer Sung is a hard-core leftist, a political hack with very little respect for the rule of law. She was a union organizer for SEIU immediately after college before attending law school, and after a couple of stints doing employment law and a little constitutional law with labor unions as her clients for a pair of private firms she ended up in her current job as a member of the Oregon Employment Relations Board.

In other words, this is SEIU’s nominee for the Ninth Circuit. You had just as soon put Mary Kay Henry, the president of the union, on that court, because whatever Henry would want is what Sung would do. And of course, SEIU is the most nakedly partisan political union this side of the American Federation of Teachers; the idea somebody who’s under their umbrella as Sung surely is can be an impartial appellate court judge is ludicrous.

And hey, this is what the Democrats want, and right now they have just enough senators to ram through a Jennifer Sung. We know there aren’t enough Republicans who actually give a damn in order to keep her out of the judiciary, so Biden’s handlers who want to corrupt the judiciary with political hacks can get exactly what they want.

But Kennedy, knowing this, at least wanted to score a few points and expose Sung as the hack she is, and he did so masterfully. You’ll enjoy this six minutes of video a lot more than Sung did.