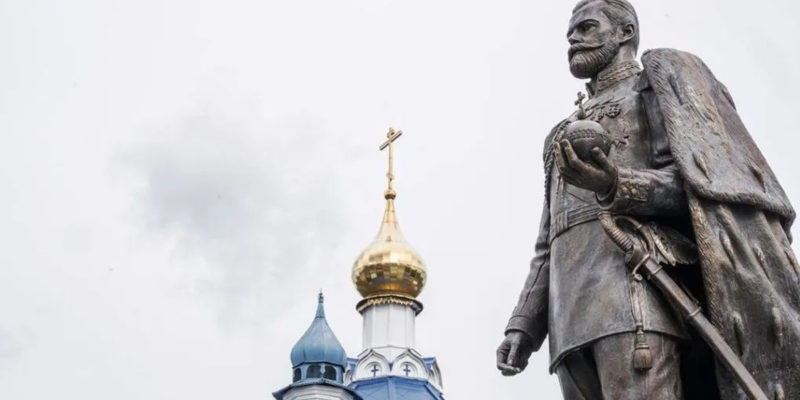 Lots of people here in the States, reflecting a Cold War mentality, still want to equate Russia with atheistic Communism.  This is a mistake that has ramifications for us here in our domestic policy, not just foreign policy.

Since the fall of Communism, Russia has built 1,000 churches per year.  That alone should be cause for thoughtful reconsideration of Russians, but we go on to a matter that is more relevant to the topic of this essay:  the building of monuments.

On 16 Sept. 2021, author Paul Gilbert reported on the unveiling of a new statue of the martyr Tsar Nicholas II of Russia (+1918).  This is no ordinary statue; it is a true monument:  ten feet tall, bronze and marble, overtly Christian symbols, consecrated by a bishop.  Pictures and a short video may be seen at this web page.

However, the ending of his article is even more astounding:

During the Soviet years, Nicholas II was vilified and forgotten. Not a single memorial of any kind existed in the Soviet Union, however, during the last 30 years more than 100 monuments, busts and memorials in honour of Nicholas II have been erected in more than 30 regions of the country.

But if honoring kings chaps your hindquarters, there are other notable monuments being built in the lands that were once held under the heavy weight of the Communist yoke, and some just as notable statues being torn down:

. . . The latest triumph of the Church over communism occurred on May 22 in the village of Novoselskoe in the Odessa Province in Southwestern Ukraine, when a statue of St. Nicholas was installed in the center of the village on a pedestal that once supported a monument to Vladimir Lenin, the Soviet leader responsible for the persecution and deaths of millions.

The Lenin monument was dismantled as part of decommunization, and the village council decided a year ago to install a monument to the great St. Nicholas, who is the patron of the village church, reports Trassa E-95.

The installation took place during the celebration of Village Day.

Then, following the festive Pentecost Divine Liturgy, the faithful of the St. Nicholas Church held a procession to the new sculpture and took part in the ceremony for the opening and consecrating of the monument. The rite was celebrated by Archimandrite Peter (Marku) from the village church.

The statute is made of carbon fiber, which is characterized by its strength, rigidity, and low weight—the 10 ft. monument weighs only 200 lbs.

According to Fr. Peter, the cost of installing St. Nicholas was taken over by the charity foundation Urbansky “Danube.”

“This is a very expensive project, and we are very grateful to our People’s Deputy Alexander Urbansky and his brother, the Chairman of the Odessa Province Council Anatoly Urbansky for the help they always give not only our village, but the entire Reni district and region,” Archimandrite Peter said.

In a similar story, the authorities of the city of Ulyanovsk, where Lenin was born, resolved to change the name of Lenin Square back to its original title of Cathedral Square. It was named such because the Holy Trinity Cathedral stood there before its destruction by the soviets in 1936.

A couple of other Lenin statues have also recently been toppled in the Ukraine.

Consider all this:  100 monuments have gone up in Russia to Saint-Tsar Nicholas II alone.  Meanwhile, in the United States, 270 Confederate monuments have been torn down (as of 2020).  Why are Russia and other ex-Communist countries moving in one direction and the States in another when it comes to monuments honoring heroes?  Because the former have kept a sense of duty to community (known as sobornost in their lands) while we in the States have by and large lost it.  Or to say it differently, Russia, the Ukraine, Serbia, and other former Communist countries are returning to their thousand-year-old Christian tradition, but the West is dead-set on leaving the Christian path (and some of the leaders in that dreadful vanguard are here in North America, particularly the heart of Yankeedom – New England – although their ideological and physical descendants on the West Coast are not far behind them at this point).

Mr Tim Kirby blisters the West pretty badly on this point, but it is a rebuke that is both justified and necessary:

Complaining about the “degradation” of society gets louder with each year as the average Western man becomes more depressed, sexless, drug addicted, emasculated, jobless, debt ridden and utterly hopeless. The response to this steady decay over the decades following WWII has mostly been a lot of finger wagging. Those that want to save the West are very good at pointing out all the bad things that are happening, but their attempts to beg or guilt trip the next generation into holding on to traditions with no system of apologetics to explain them is completely futile.

The ultimate reason why Conservatives, Traditionalists (Western TradCons), Republicans, the Alt-Right, the Red Pill, Team Trump and so on continue to lose is that they firmly believe in the idea that the individual is sacred and that no government, and to a greater extent no one, should tell this blessed individual what to do. Yet this same group is eternally surprised that raising people in a system that can never tell them “no” turns society into spoiled narcissistic hedonistic adult children.

The broad spectrum of pro-Western political viewpoints mentioned above is stuck in a death cycle of clinging to its Liberalism constantly yet howling about the negative consequences of it. They cry about falling birthrates and the death of the family and yet generally advocate for living for yourself and building a career or not taking the risk on marriage after all “she could take half your stuff”. They want people to make sacrifices for their nation in spite of all of us being indoctrinated into a cult of Hedonism and “looking out for #1”. They want women to be feminine and men to be masculine, which are ideals to strive for that serve little purpose when you spend your adult life alone in your one-bedroom apartment, and when there is no means of enforcing any standard onto people in the first place. This group complains about the rampant narcissism in society but makes it clear that no one can tell anyone what to do. The “solution” to everything of adding more Liberalism is really the cause of our suffering.

No attempts to save culture, the family, traditional gender roles or anything else sane will work when we live by an insane premise, that society is made great via Individualism. Culture, patriotism, family, traditional gender roles, etc. are all concepts founded in the idea of contributing in or belonging to a group. Rampant “me culture” was the poison to society that all of our traditional religions fought to keep in check for the future of humanity, but since religion is now a personal choice they have essentially lost that war forever.

To the extent that the medieval peasant needed a shot of Individualism to rise from his meaningless cycle of existence, the Postmodern man needs a shot of the traditional values that kept the peasant working in the fields – productive, masculine, loyal, married with children and filled with ideas of something greater than himself perhaps worth sacrificing for. If the Right in the West does not answer the call to some level of Illiberalism, it will fade away into the night wrapped in a warm blanket of smug self-assuredness that the Individual is the Alpha and the Omega.

The South actually has a leg up on other parts of the union as it regards balancing the duties owed to the individual and the duties owed to society as a whole.  Here at the South, piety towards ancestors has long been a hallmark of our people.  Examples of it abound in the poems of Donald Davidson and the essays of Mel Bradford, to give but only two names.  Here is the ending of Professor Davidson’s famous poem ‘Lee in the Mountains’ to illustrate this Southern attitude:

It is not the bugle now, or the long roll beating.
The simple stroke of a chapel bell forbids
The hurtling dream, recalls the lonely mind.
Young men, the God of your fathers is a just
And merciful God Who in this blood once shed
On your green altars measures out all days,
And measures out the grace
Whereby alone we live;
And in His might He waits,
Brooding within the certitude of time,
To bring this lost forsaken valor
And the fierce faith undying
And the love quenchless
To flower among the hills to which we cleave,
To fruit upon the mountains whither we flee,
Never forsaking, never denying
His children and His children’s children forever
Unto all generations of the faithful heart.

But when duty to ancestors, to our current neighbors, to great-great-grandchildren, etc., is overwhelmed by the immediate wants of the individual, which is the cancer that has been metastasizing in the US and rest of the West in recent centuries (the South included, unfortunately), the result is the Wokeism we are now afflicted with.  Dishonoring the achievements of ancestors, destruction of the memory of historical events, rewriting of gender, labeling of math as racist – this is unbalanced individualism on display in grand style.  Until we get some balance back, as Mr Kirby said so well, Wokeism and perhaps worse ideologies are only going to get stronger.

It is true that Russia, etc., still have a long way to go to get over the effects of Communism.  That is to be expected after living under atheist rule for 70 years.  But when it comes to tempering the worst aspects of Woke individualism through monument and church building and so on, they are out-pacing the US and most other Western nations by a country mile.

Interested in more national news? We've got you covered! See More National News
Previous Article VIDEO: Cedric Richmond Stumbles His Way Through A Chris Wallace Interview
Next Article AVALLONE: As An American, Here’s What I Miss