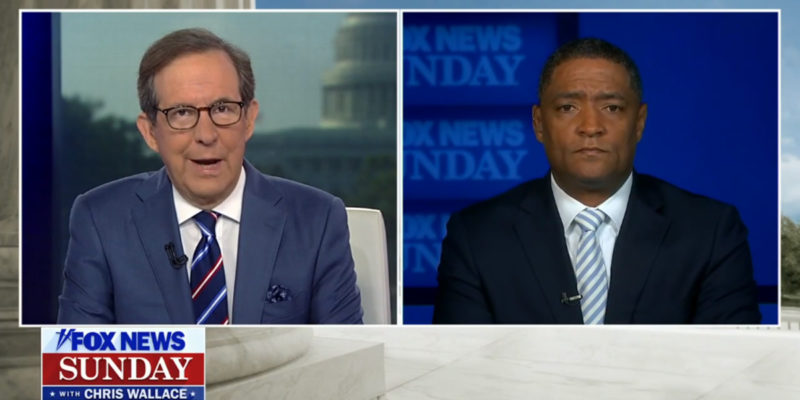 This goes on a bit longer than we would have hoped – it’s about nine and a half minutes – and you don’t necessarily have to watch the whole thing. But you probably should watch the seventh and eighth minutes of it when Richmond regurgitates the Biden regime lie that you can spend $5 trillion on the federal government and have it cost “zero,” which Wallace can’t abide.

Cedric Richmond, Biden’s senior adviser, repeated the claim on Sunday, saying the $3.5 trillion budget reconciliation bill – which Sens. Joe Manchin, D-W.Va., and Kyrsten Sinema, D-Ariz., have stalled – will cost nothing. “I think what’s important for people to understand is that this piece of legislation costs zero,” Richmond said. “We’re going to pay for it all by raising taxes on the very wealthy and big corporations.”

Even Wallace is wrong, because you can’t raise $5 trillion by just taxing the wealthy. And you certainly can’t raise it by just taxing corporations, because when you tax corporations they pass that cost on to their customers or it gets paid by their employees in the form of layoffs or reductions in compensation or benefits. Corporations don’t pay taxes, they collect them, whether clowns like Jen Psaki understand that or not.

What’s worst about this is the mentality. For Richmond and Team Biden to be pushing this “zero cost” idiocy in the first place is instructive, in that it shows how callous they are toward their fellow Americans. We’ve seen this same mentality in Louisiana with its Bidenesque governor.

Even jacking up taxes on rich guys still takes away money those rich guys went out and earned, almost assuredly in spite of the government rather than thanks to it. But you can’t tell that to Richmond and the Team Biden clowns; they still believe the Barack Obama “You didn’t build that” lie. It’s the same mentality.

Cedric Richmond has never done a day of productive private-sector work in his life. He’s been in politics almost from the day he left school. He’s a hack who rose by pure happenstance from state representative to congressman to where he is, without ever showing much in the way of merit or brains. And he’s entirely likely to be the next mayor of New Orleans, if he wants it, after LaToya Cantrell ruins the place over the next four years following her re-election a few weeks from now.

In the meantime he’ll be doing hits on news shows like the one with Wallace yesterday, and none of those are likely to go any better than this one did.

Interested in more national news? We've got you covered! See More National News
Previous Article ALEXANDER: Military Code Should Be Applied Fairly And Equally To All
Next Article GARLINGTON: Russia Is Climbing Out Of Wokeism Faster Than We’re Falling In