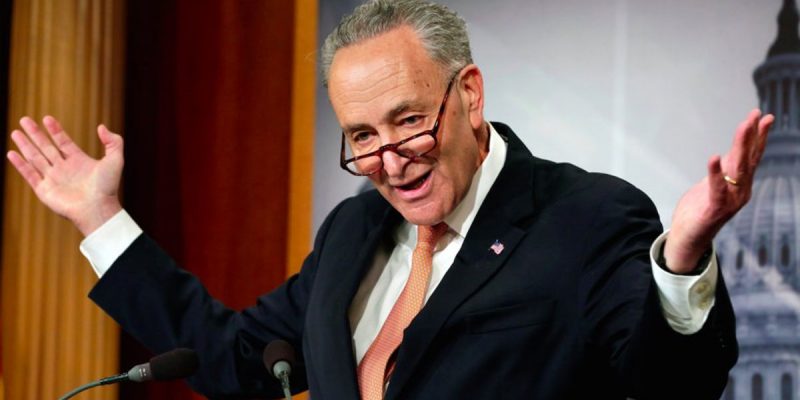 We can have an argument about whether Senate Minority Leader Mitch McConnell’s agreement to punt the debt ceiling fight until Dec. 3 was a cave-in, or whether McConnell was actually playing a bit of 3-D chess by giving the Democrats, and specifically their Majority Leader Chuck Schumer, more rope by which to hang themselves.

McConnell’s goal, or at least this ought to be his goal, is to force Schumer and the Democrats to use reconciliation – a bullet of which they only have one – to raise the debt ceiling. Under the rules, if McConnell can make Schumer use reconciliation on raising the debt ceiling it becomes extremely difficult to use it on $3.5 trillion in welfare spending. Essentially the debt limit fight serves as a veto of the $3.5 trillion.

Which is a terrific strategy, and it has done a great deal to gum up the works among Senate Democrats. It’s why Joe Manchin and Kyrsten Sinema have fallen off the reservation.

Schumer and the Democrats responded to McConnell’s gambit the way they usually do – throwing temper tantrums and acting like little bitches. Never once, even when Manchin and Sinema repeatedly told them the $3.5 trillion was a bridge too far and that they’d have to come back to reality, has Chuck Schumer stopped to realize he can’t deliver on all these insane promises.

McConnell yesterday relented, giving about seven weeks’ worth of an extension on the debt ceiling.

The Senate Thursday evening temporarily averted a debt default after passing legislation to extend the debt ceiling and cover the nation’s bills until December.

The legislation passed 50-48, a day after Democrats agreed to a compromise offered by Minority Leader Mitch McConnell and 11 days before the country would be unable to pay its bills according to Treasury Secretary Janet Yellen. Though Republicans remained opposed to an increase, he said, they would allow Democrats to pass a short-term extension under regular order to prevent a default, giving them more time to raise it via an expedited reconciliation process.

“We have already made it clear we would assist in expediting the 304 reconciliation process for stand-alone debt limit legislation,” McConnell said. “To protect the American people from a near-term Democrat-created crisis, we will also allow Democrats to use normal procedures to pass an emergency debt limit extension at a fixed dollar amount to cover current spending levels into December.”

It’s a win for Chuck Schumer, but not exactly a big one.

Rick Moran at PJ Media notes that these little debt-ceiling increases prevent the implementation of a $3.5 trillion blockbuster bill – there won’t be the borrowing power to finance them.

So McConnell can go on giving the Dems just enough money to keep the wheels turning every few weeks without doing any catastrophic damage, and meanwhile the massive spending binge is still stuck without the 51 votes it needs to pass the Senate.

Why is Mitch McConnell blinking? Let’s be clear: this is a blink, not a cave. There’s a lot to play out. But here is the gist. Democrats refusal to budge on using reconciliation to beat Republicans’ repeated filibusters is moving quickly toward a situation where there will literally be only two options: filibuster carve-out or debt default. Those are both very bad options to McConnell. As I noted yesterday, this isn’t a matter of saying “Oh Democrats are tougher. They won’t cave.” It’s that the mechanics of reconciliation will mean there’s no more time. They’ll have no way to cave. That calendar reality creates a very bad situation for McConnell.

Now – Joe Manchin said later that he won’t agree to a filibuster carve-out, which means it’s not really on the table. But the strategic retreat here is that nothing has changed with respect to Chuck Schumer’s inability to pass that $3.5 trillion.

In fact, it might have gotten worse. Why do we say that?

Because when Chuck Schumer went to the microphone in the Senate to act like a complete asshole over a seven-week extension of the debt ceiling, he so disgusted Manchin that the West Virginian got up and walked out.

At some point, Manchin and Sinema are going to realize this team they’re on doesn’t really like them and that the other team, which is more and more likely to be at the top of the standings in a little more than a year, has a lot to offer.

Manchin isn’t exactly a conservative, though all he says these days are conservative things. He’s talking about how he doesn’t want an “entitlement society,” which makes him further to the right than Lisa Murkowski at this point. You get to the point relatively soon, at least the way things are moving, at which McConnell can approach Manchin with the idea that he could keep all of his committee assignments and ranks if he switches sides – he doesn’t even have to become a Republican; just go independent and caucus with the GOP – and have that entreaty bear fruit.

The Democrats themselves have noted they’re a heartbeat away from losing their majority. It might be more like a frown than a heartbeat.

But Chuck Schumer is such a dyed-in-the-wool asshole that he can’t help himself.

Hubris creates nemesis. It’s a law of nature. And Chuck the Schmuck is pissing off the football gods something awful right now.