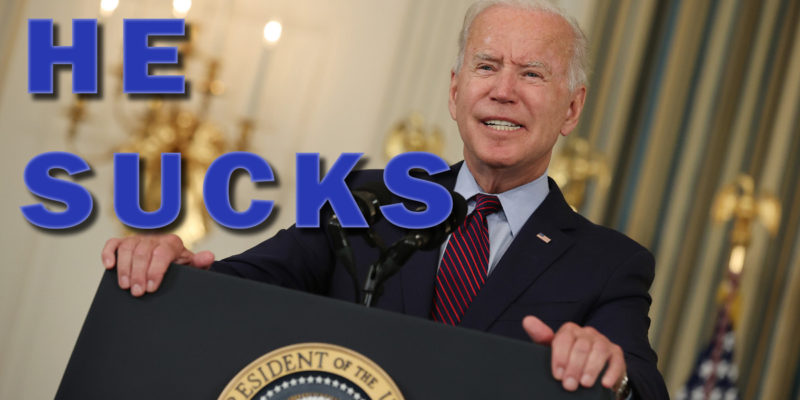 Joe Biden has been president for just over 8 months and the amount of worthy effort to come out of his administration is as bad as LSU’s Defense trying to keep up with Bo Nix. Let’s face it, this sucks.

It’s actually about to get worse, though.

Between the disastrous withdrawal of US troops from Afghanistan, the botched drone strike that killed innocent Afghans, the political and humanitarian crisis at the southern border, the skyrocketing inflation, and the rise in prices of goods and services… shall we go on… this administration is nothing short of a dumpster fire full of trash.  Now, Biden is caving to the likes of AOC and pushing to levy a major tax, not just on the rich, but on everyone and everything.

His promise to not raise taxes on the anyone making under $400,000 is also garbage and it is a flat out lie. Our friends over at Americans for Tax Reform are leading a 120-plus member coalition in opposition of this assault on American capitalism and the working class. They released a scathing rundown of what the proposed tax increases would mean for business and families alike where they pointed out that the Biden plan would raise taxes for “74.1% of middle income-quintile households” – so much for taxing the rich only?

According to ATR this plan would raise the corporate tax rate to anywhere between 25-28%, which is, as they note “a rate higher than Communist China.”

Additionally, it would levy a 95% excise tax on pharmaceutical manufactures if they do not go along with the Pelosi price controls.

All this is going to do is stifle innovation and decrease access for everyday Americans. The price control is a total disincentive for R&D and will lead to a dramatic decrease in researchers going after more aggressive and innovative treatments and medications which will all but squash the progress of healthcare in America.

So when these measures lead to a lack of new protocols and we die a slow death at the hand of socialized medicine, the Biden tax plan also creates a “second death tax” because, you know, you can die twice now? The list goes on, but it sucks. It’s all trash, but then again, this is what we should expect from a trash administration.

The moderate members of Congress have got to start asking themselves if we are better off now than we were a year ago under the Trump administration. The obvious answer is a resounding NO, and with the mid-terms approaching it will be interesting to see where these members stack up and what the Biden administration will do in an attempt to correct course.

For the record, we aren’t confident they will do anything to change the disastrous direction they are on. A recent Gallup Poll has the Biden approval rating upside down for the first time in his administration at a dismal 43% with 53% disapproving of Biden’s job performance. This is a 14 point drop from his inauguration approval rating. Surely these members are taking note that the president they’re propping up sucks, and the public is aware that he sucks, right?

We are just over 400 days away from the 2022 midterms and it cannot come soon enough.

Interested in more national news? We've got you covered! See More National News
Previous Article SADOW: Death Row Inmates Get Treated Better Than Public School Kids In Louisiana
Next Article TOBLER: From Kyle Ardoin’s Office To Jeff Crouere, Let’s Not Be So Cavalier With The Facts