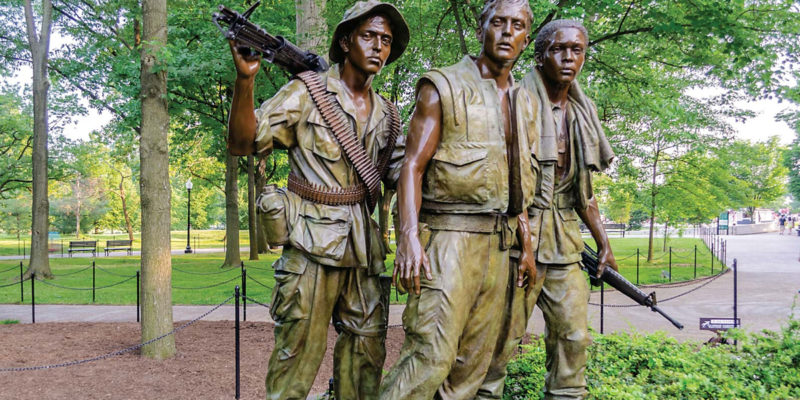 We all know someone who served in the military if not actual combat.

I regard not serving in our nation’s armed forces the greatest regret in my life though America was at peace during the optimal years for enlistment.

That said, my admiration is tremendous for the men and women who did take the oath to defend the Constitution of the United States whether at a time of peace or war.

Some servicemen come back home from their tour(s) overseas relatively unfazed; others return carrying scars, both on the outside and the inside.

While growing up I got to know a friend of mine’s uncle who served our nation during Vietnam in an extraordinary capacity. I’ll refer to him as Sullivan.

Sullivan was generally evasive about his time in Vietnam though from talking with family members who were more familiar with the details of his service I managed to piece together some of his experiences, which would not be considered typical by any means.

And as much as he enjoyed his social outings to the movies, every once in a while a film scene that would be insignificant to the rest of us would hit too close to home for Sullivan and he’d have to walk out the theater mid-feature.

Though he never wore his military service decorations in public, Sullivan carried his service scars with him everywhere. Though his enlistment came to an end decades before, the war never left him mentally or emotionally.

Sullivan would carry it with him until the end and it contributed to the struggles he endured in civilian life, having difficulty either holding down a job or gaining one though he exemplified integrity and fastidious professionalism.

It seemed as if life kept unjustly dealing him bad hands.

Fortunately Americans treat their war time veterans much better now than they did post-Vietnam, where those who served were cast as villains.

While Sullivan was by no means a political person, the one politician who infuriated him was John Kerry. The jet-setting latter-day climate czar had made his name initially as a face of the anti-war movement and in doing so impugned en masse American servicemen in Vietnam as war criminals akin to Genghis Khan’s notorious Mongolian horde that rampaged two continents.

Sullivan was further incensed to see someone who in the 1970s attacked his brother servicemen now repackaged as some kind of super patriot.

Sullivan spent those months before the 2004 election modestly hustling for Kerry’s defeat.

When George W Bush was definitively recognized the winner, Sullivan posted a message online to his late brother veterans whose service Kerry had disparaged to score political points that they could truly rest now.

While visiting the Balkan republic of Northern Macedonia, I walked inside a military surplus shop and a marksman medal caught my eye. I bought the Yugoslav army relic and later gave it to him as a gesture of appreciation for his military service.

Sullivan was tickled to receive this post-service “commendation” and he kept it on his nightstand.

A few years later I helped a local parade land a celebrity grand marshal and the organizer offered a few float spots as thanks. As the theme of the parade was Saluting Our Vets I arranged for Sullivan to ride with the high profile guest.

This Vietnam vet was going to finally have his parade albeit 35 years late. Sullivan enjoyed himself immensely and I was grateful for the opportunity to give back to someone who gave far more than I could ever aspire to.

It wouldn’t be until 2020 with COVID rapidly spreading across the globe that I would see Sullivan again.

Not in good health and living as a shut-in during the start of the pandemic, I offered to pick up groceries for Sullivan. It was a challenge to get him to respond but eventually he texted the limited selection of foods he ate.

As Louisiana groceries were having supply issues, I decided to head to Texas to stock up on items that were hard to find here as toilet paper wasn’t the only consumer good in short availability.

Even in Houston limits were imposed on the number of canned goods you could purchase at one time so I ended up hitting a few different groceries the same day.

If there was anything that made an impression on me at the start of COVID prior to the spike in hospitalizations and deaths, it was the purchase caps, a concept that was previously unthinkable in America.

We had become Cuba.

The next day I arrived at Sullivan’s home and he didn’t say a word when I brought the groceries inside. His face exhibited no expression while I stacked his requested cans of pork and beans in the kitchen cabinet.

It would end up being the last time I’d ever see Sullivan.

Age and natural mortality had succeeded this past October where his adversaries on foreign soil had failed. And in a fitting testament to his inner strength, Sullivan survived two bouts of COVID despite being in a fragile state of health.

The Communists would not claim his life either directly not indirectly!

I believe there’s a heaven and I believe Sullivan has been granted admission through the pearly gates from the “time served” through the hell he experienced in war overseas and the war within.

But if there’s a Valhalla, then Sullivan certainly has an honored seat at the long table, heartily welcomed by his fellow warriors.

Thank you Sullivan for sacrificing more than most people could ever imagine for a country you loved more than it loved you back and I hope you’ve finally found the peace in death that had eluded you in life.