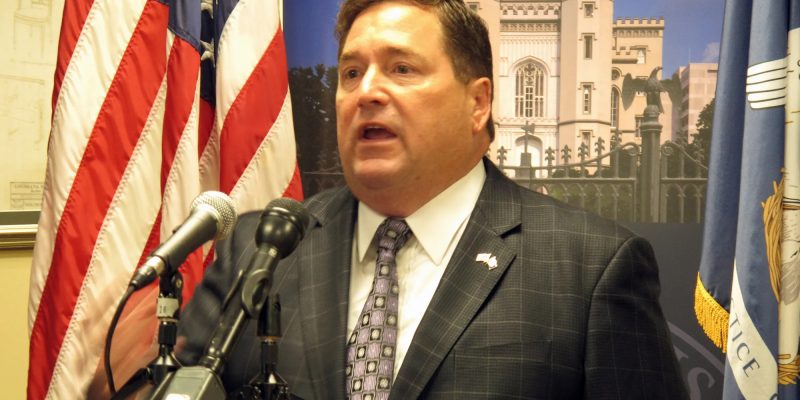 A couple of weeks ago when John Bel Edwards jetted off to Scotland to do…something related to climate change, leaving Lt. Governor Billy Nungesser in charge for several days as acting governor of Louisiana, we suggested three items Nungesser could address if he wanted to set a marker for himself as a consequential Republican worthy of consideration by the state’s voters as the next occupant of the Fourth Floor at the state capitol.

None of the three were particularly high-consequence items. Instead they were signals, really, that Billy Nungesser was with the majority of Louisiana’s citizens and willing to do something about it when given the opportunity.

The three things were: declaring an end to all of John Bel Edwards’ COVID mandates, and particularly the ones affecting school kids with those ridiculous masks; issuing an executive order banning biological males from all state-sponsored or state-sanctioned female sporting events; and sending the Louisiana State Police with a forklift and/or crane and a flatbed trailer down to New Orleans to collect the statues of Robert E. Lee and P.G.T. Beauregard from the police impound lot they’ve been gathering dust in and bringing them somewhere else in the state where they could be prepared for public display once again.

It wouldn’t have substantially altered the direction of Louisiana’s history if he’d done them, but it would have been reason for a badly-needed morale boost among the citizens Nungesser would like to get votes from when he runs for governor in 2023. And to reverse them would have made for a political mess, something John Bel Edwards likes to avoid. With Louisiana’s COVID hospitalizations almost nonexistent he would have looked like a moron reimposing those COVID mandates, voiding a Nungesser executive order on transgender boys in girls’ sports would have made the third time Edwards stood against the girls and their parents, and it’s questionable whether Edwards even would have had the power to take those statues away from Nungesser at the state parks.

We’d bet that all three of those actions would have stood. Nungesser would come out of them looking like, in the vernacular, a straight-up baller.

Needless to say, Billy Nungesser did none of those things.

The temptation in explaining why is that he’s a weak, timid man who won’t go out on a limb for any reason. But the fact is, while that’s true it isn’t why he let those days pass as acting governor without making a dent at all.

No, Nungesser did none of them because Billy Nungesser is not on our side. Not on COVID restrictions, not on the transgender issue and not on the monuments.

And in a minute we’ll show you something else Billy Nungesser isn’t on our side on.

Nungesser has said he’s behind Edwards in all of his unscientific, stupid COVID restrictions. August 2, 2021…

Lt. Gov. Billy Nungesser said Monday tourism in Louisiana is on the rebound, but a 2020-style shutdown sparked by the coronavirus would be devastating.

“We are praying we don’t have to shut anything down,” Nungesser told the Press Club of Baton Rouge. “We have got to turn this thing around.”

The Republican made his comments about 90 minutes before Gov. John Bel Edwards announced that he was again ordering an indoor mask mandate to help combat the fourth surge of the coronavirus.

Nungesser said he backed the mandate, has been wearing a face mask himself indoors and that face masks are made available to visitors at state welcome centers and other sites.

Nungesser was asked if Attorney General Jeff Landry’s comments about Governor Edwards’ mask mandate being unconstitutional reflects negatively on the state and could thus negatively affect tourism. Nungesser responded, “Landry’s at home with the virus. How hypocritical. I’ve been to every meeting with the governor. Landry showed up one time when Coach O. was there, and he jumps on stage with Coach O. and agrees with him. He disappeared and never came back. When I gave John Bel my word I was going to work with him, my word is my bond. This is the right thing for Louisiana. Landry needs to quit grandstanding. He’s disrespecting our governor to make himself look good, and it’s not right.”

Further, Nungesser said, “Nobody likes to be told what to do, but we’re smart enough to wear a mask because we want to protect our friends and family. The reason we have to make it mandatory is for the ones who don’t listen. To bring politics into this is absolutely absurd. We’re not going to win unless we’re all pulling together as Louisianians and doing the right thing. I truly believe it’s wearing a mask, washing our hands, and keeping our distance. I’m cautiously optimistic that we’re going to get through this and we’re going to get back to these record-breaking years.”

“They will have a negative impact,” said Nungesser, a Republican, when asked about the proposed transgender restrictions in a Thursday interview. “It would be better for us to open our doors very wide.”

Nungesser, as lieutenant governor, oversees Louisiana’s marketing and tourism efforts and has made similar comments in the past about LGBTQ restrictions. He’s also a statewide elected Republican who’s been active in Louisiana GOP politics for decades. He is expected to run for governor in 2023.

Nungesser’s criticism focused on the legislation’s impact on the economy. He said he couldn’t comment on the ethical implications of the bills — whether they amount to discrimination — because he hadn’t read through the bills personally.

But as the person who is in charge of attracting visitors to the state, he said he is confident transgender restrictions would cause problems for the tourism and hospitality industry just as it is trying to get back on its feet.

Other states have enacted that legislation. There is absolutely zero evidence Billy Nungesser’s position is correct. Transgender sports bans have no effect on tourism. Even if they did it wouldn’t make that principled position less correct.

As for the monuments, Billy Nungesser has never been on the right side of the issue. First of all, he allowed Mitch Landrieu to come into a state park – City Park in New Orleans is a state park, and state parks are under the control of the Lt. Governor – and destroy a historical landmark. Nungesser then proceeded to blame Landry, the Attorney General, for not doing anything when Landry needed a client – namely, Nungesser, to agree to a lawsuit in order to stop the destruction of the Beauregard monument.

And when the deed was done Nungesser’s suggestion was to move the Lee and Beauregard statues to the Houmas House Plantation, which, as it turns out, is owned by a cousin of Billy Nungesser’s. When that became public knowledge, he washed his hands of the issue altogether and is now sitting on his voluminous rear end while two priceless pieces of public art which could be attracting tourists and contributing to the state’s cultural economy gather moss in a police yard.

Nungesser said he’s sensitive to concerns on both sides and wants to reach a compromise.

“You have one side they want them to go back up. On the other side, they want to throw them in the river,” Nungesser said. “I think we need to come somewhere in the middle.”

A group Nungesser wants to appoint could decide how to display them and determine the cost. His goal is to come up with a “vetting process in a way that’s fair and cordial to both sides of the issue.”

The thing is, Mitch Landrieu and LaToya Cantrell both had a tiger by the tail with respect to those statues. The biggest favor anybody could do would be to take both of them off Cantrell’s hands so she could be rid of that problem. But Nungesser’s split-the-baby approach is to do nothing.

Now here’s something else to show you just who Billy Nungesser is. You’ve heard about the insane plans the Biden administration has to destroy the Claiborne Expressway in New Orleans as a “racist” road the construction of which supposedly destroyed a once-vibrant black neighborhood. That’s a myth; the neighborhood the road now runs through was a slum, which is why that site was picked in the first place. The other option was to have an interstate highway built along the Mississippi River running past the French Quarter and the Marigny; if you think it was racism, rather than sanity, which drove the decision where to build the I-10 loop into downtown New Orleans in the late 1960’s, it’s proof that wokeness is your substitute for rational thought.

We mention this because of a press release put out this morning by the Louisiana State Museum, another entity controlled by Billy Nungesser…

“THE YELLOW BOOK: OLD SOUTH BATON ROUGE” – AN EXAMINATION OF THE EFFECTS OF INTERSTATE CONSTRUCTION THROUGH THE CAPITAL CITY
New Capitol Park Musueum exhibit part of larger project exploring the toll on people and their communities

BATON ROUGE, La. – Lieutenant Governor Billy Nungesser and the Capitol Park Museum will open The Yellow Book: Old South Baton Rouge, a photography exhibition exploring the legacy of interstate construction in the Old South Baton Rouge. This exhibition is part of a larger project called The Yellow Book, named after the 1955 government publication showing proposed interstate routes, where Johanna Warwick documents the effects of constructing interstates through the 104 cities designated in the publication.

Friends of the Capitol Park Museum is sponsoring a reception for The Yellow Book: Old South Baton Rouge on November 30, 2021, from 4 p.m. – 7 p.m. at Capitol Park Museum. The reception is free for members and $10 for non-members; two drink tickets are included with admission. The exhibition opens to the public on December 1, 2021.

In The Yellow Book: Old South Baton Rouge, Warwick examines how Interstates 10 and 110, built in the early 1960s, divided Old South Baton Rouge in two, displacing people and businesses and rupturing its sense of community. Using the elevated interstate as the framework for this series, Warwick captures the shadows they cast over this African American neighborhood, affecting people’s lives, and revealing how it all unfolded in Baton Rouge.

So now Billy Nungesser is promoting this myth of racist roadways through Louisiana’s major cities with your tax dollars.

And before you say “that decision is made below Nungesser’s pay grade,” yes, that’s true. But Billy Nungesser has appointed leftists who do approve this garbage.

He’s 0-for-4 in these items. You really don’t need any more evidence here. Billy Nungesser isn’t on our side, and he certainly won’t be if we make him governor.