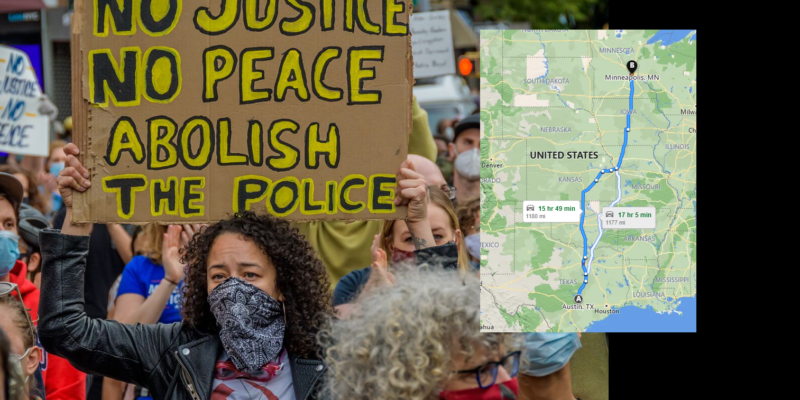 Quick quiz: Which city was more likely to disband the police during Tuesday night’s election (and don’t answer both)?

A) Minneapolis, birthplace of the Black Lives Matter movement and continuing radicalism regarding “community policing” schemes, or

B) Austin, capital of Republican stronghold Texas, which just in May passed a citizen-backed resolution to reverse a homeless camping ordinance.

The answer was surprisingly B, Austin.

The two cities, on opposite ends of the country separated by 1,000 miles along Interstate Highway 35, have one thing in common: radical leftist leadership attempting a dismantling of police in favor of community enforcement.

On Nov. 2, voters in Austin rejected a citizen-initiated petition to increase funding for the police department, which was recently cut by a third and was accompanied by a sharp uptick in violent crime. Also last night, Minneapolis voters rejected a proposal 57-43% to replace the police with an amorphous department of public safety.

It wasn’t even close in Austin. According to unofficial results, 67% of voters rejected Proposition A. The proposition was led by Save Austin Now, which successfully passed Proposition B in May to restore the city’s homeless camping policy which city leaders had scrapped in favor of a disastrous camp-everywhere (except city hall) policy. Though the minimum threshold was 20,000 signatures, Save Austin Now gathered around 30,000 signatures after encountering internal opposition at city hall over May’s Prop. B and scrutiny over a “sampling” of signatures. The more recent petition did not encounter any such opposition. Supporters raised around $2 million for the effort, while George Soros helped to bankroll the largely out-of-state No Way Prop A campaign.

While Austin still has a police department and city leaders such as Mayor Steve Adler and Council member Greg Casar intend on experimenting with community policing, the stakes were much higher in Minneapolis. The Minneapolis initiative would have dismantled the police entirely. The initiative would have removed language from the charter, including minimum funding requirements, and would have divided control of public safety between the mayor and council. The initiative was supported by Yes 4 Minneapolis, inspired by the death of George Perry Floyd. Supporters gathered 22,000 signatures and found themselves before the Minnesota Supreme Court to successfully defend the measure.

From the hip: In both cities, the measures divided the Democratic party. In Minneapolis, Mayor Jacob Frey, who is running for a second term, and Minnesota Gov. Tim Walz were opposed, while radical liberals such as Attorney General Keith Ellison and U.S. Rep. Ilhan Omar were in support. In Austin, establishment Democratic support was unilaterally opposed to Prop. A, though many longtime Democratic activists and former elected officials supported it.

Not all was lost for conservatives and common-sense Democrats in Travis County, where Austin is situated. Voters in certain pockets defeated school bond debt proposals and a suburb defeated a double-tax regarding ambulance services.

The defeat of Prop A will likely not change anything regarding the political landscape on the right — conservatives there are used to being a vocal and effective minority. But with a dithering Biden Administration and continuing divides between Democratic Socialists and moderates, the fracturing will continue on the left giving Republicans increased chances of victory where they can find support.

Meanwhile in Minneapolis, radical leftists are now enraged and will no doubt attempt implementation of community policing in other ways. The divide on the left is already sharp and pronounced, and Republicans in the Twin Cities have a unique opportunity.

Again, the stakes were higher in Minneapolis, which has also seen an upward trend in violent crime, with the entire police department in jeopardy. In Austin, though the police is severely understaffed, funding has been restored to pre-2000 levels. It may take several years to make up for the damage done by the cuts, however, the police department was not on the verge of extinction. Perhaps if it were, Austin’s election results would have mirrored Minneapolis’. Yet in both cities crime is on the rise. This should make for a golden opportunity for conservative leaders to chart a better path forward as Republican wins such as what we saw elsewhere across the country on Nov. 2 continue to mount.