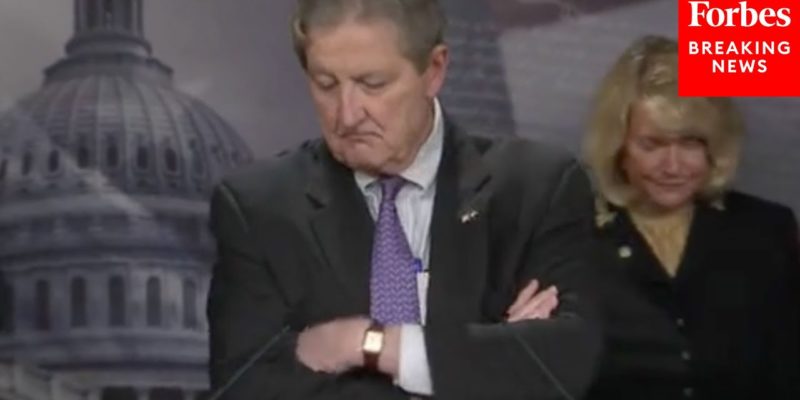 We’ve got a couple of speeches from the Senate GOP press briefing yesterday to pass along. Specifically, Ted Cruz and John Kennedy laid into the Biden administration for its energy policies, and no quarter was given.

This was a press gaggle essentially held to trash Biden on energy as he returned from Scotland where nothing of any particular substance was produced but lots of hot air was let off talking about making commitments of some $130 trillion from governments around the world to fight climate change through doing away with fossil fuels.

Everyone knows none of this will actually happen. These governments are all setting unrealistic “targets” of carbon emissions which will never be met. They’re a series of PR exercises which do no good but on the other hand cause economic damage.

Principally, as an example, there is Biden’s policy war against the American oil and gas industry. He’s stood in the way of pipeline construction, he’s attempted to stop oil and gas leases on federal lands, and he’s unleashed a regulatory cytokine storm on the industry. As a result, American oil companies are now sitting on mountains of cash that would normally be used on oil and gas drilling and exploration, which are the most job-intensive parts of the industry, so there’s a bottleneck in the economy, and U.S. oil production is sagging from its highs under the Trump administration.

This happens just as demand has risen, with the country’s economy attempting to recover from its COVID-induced recession of last year, and that means oil prices have shot through the roof.

The stupidity and, frankly, near-treason of this is manifold. Because the OPEC cartel is made up of countries who are not our friends and owe us very little. The way they see it is if the U.S. isn’t going to produce its own oil to satisfy its own demand, the price will naturally rise and boost their profits. Those countries all have uses for that money. When Biden comes to them demanding they produce more and sell to us for a lower price, the response is “why on earth would we do that?”

We have our own oil supply. We could be boosting our own production, paying less at the pump and exporting less of our own money. Biden says we need to lower domestic production for the sake of the environment but then we’re not actually using less oil.

You have to be a Hard Left moron like AOC or Rashida Tlaib to see any sense in this policy. The Republican senators don’t see any sense in it. And Kennedy and Cruz specifically are not impressed.

…and here was Cruz, who pulled no punches at all in laying into the Biden administration for the damage it’s already done.