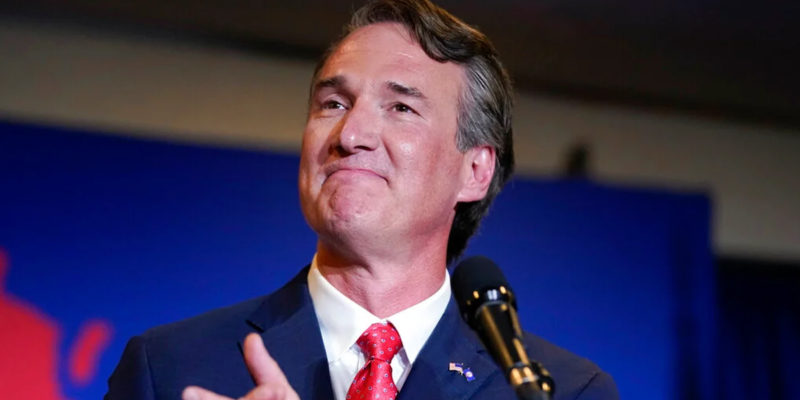 Last night in Virginia and New Jersey’s statewide elections something breathtaking happened – the beginning of a political revival likely to sweep across America over the next three or four years.

The results weren’t a full sweep of the items on the ballot for the Republican Party. That was never going to happen. In fact, nobody even seemed to see the New Jersey governor’s race coming. It seems that Phil Murphy, the Democrat incumbent, is going to squeak out a victory over former assemblyman Jack Ciattarelli, his far more charismatic opponent, Murphy, who killed thousands of his state’s senior citizens with COVID-19 after he stashed infected patients in nursing homes, leads by a few thousand votes with the counting almost over; had the Republican establishment recognized the real opportunity to win in New Jersey and put resources behind it, Murphy would have been a goner.

But that aside, it’s clear last night was a big night for the GOP. More importantly, it was a big night for the American people, because the results in a pair of blue states showed clearly that this country has NOT been fundamentally transformed into some declining socialist hellhole. We’re having that reality forced upon us by a president elected under a cloud of irregularity and a Congress controlled by the smallest of margins by Democrats, but it’s not who we are.

Virginia hasn’t elected a Republican to statewide office in 12 years. Last night Republicans swept the governor’s race, the lieutenant governor’s race and the attorney general’s race. They also recaptured the state general assembly, winning 51 of the 100 seats according to the last count we saw.

The lessons from last night in Virginia are numerous, though it isn’t clear that either side will learn any of them.

What’s almost certain is the Democrats won’t learn a thing. That party has set itself on fire and seems to think the only way to put out the flames is to douse them with gasoline.

It was very obvious that wokeness was the reason Republicans had a resurgence in Virginia. That election wasn’t about taxes, though Glenn Youngkin’s message is heavy on tax cuts and exit polls showed that the economy was the number one issue among Virginia voters. The economic stuff is really more of a rejection of Joe Biden’s terrible policies than anything else. But the number two issue in that election was education. Youngkin is proposing a small modicum of school choice, which is probably a lot less aggressive than he needs to be given the outrage of public-school parents over the triple whammy of transgenderism, critical race theory and COVID hysteria leftist school officials have been pushing in places like Loudon County. But it’s the perception that the leftists who control the schools are out of control which has created this wave starting in Virginia.

There are some, like for example MSNBC’s Joe Scarborough, who are warning the Democrats that wokeness is killing their party. Scarborough isn’t usually correct but he is on this. But they’re not going to listen to him. They can’t. They’re too invested in pushing the Hard Left agenda in the wishful belief that once it’s installed it can’t be ripped out, and the country will be permanently changed by it. That’s worth losing an election here and there, because the cultural and societal change you can get from teaching, say, the 1619 Project to all the school kids or canceling everyone who believes there are only two genders means you’ve rigged the game forevermore.

The problem is, and the Virginia races make this clear to anybody willing to see it, most people have a visceral reaction to this idea. They literally hate it. It’s the kind of thing which could literally result in blood in the streets. People – Democrats who voted for Biden last year – came out of the woodwork to reject it at the polls.

Terry McAuliffe got 200,000 more votes than Ralph Northam managed four years ago, and while Northam won an easy race over Ed Gillespie McAuliffe found himself on the wrong side of a humiliating defeat at Youngkin’s hands. McAuliffe spent a whole lot of money and ran an uninspired race, for sure, but his performance was actually better than Northam’s in terms of getting his vote out.

There just isn’t as much of it, and people who don’t vote in statewide elections in Virginia came out of the woodwork to reject the Democrat Party.

You would think that’s a slap in the face that would cause introspection on the Left. And you would be wrong.

Last night on all the cable news channels there were Democrat pundits and spin doctors making the claim that Critical Race Theory isn’t actually a real thing. That it’s a bugaboo invented by Republican politicians and consultants to fire up the rubes.

The thing about this which is so fundamental isn’t the debate about critical race theory per se.

The fact is that if the CRT argument were merely cooked up by a bunch of GOP consultants and fed out to Republican voters without any truth behind it, it wouldn’t fly. Democrats control all the major newspapers in that state, the local TV stations, the major media. The idea that you can push Republican lies through that filter and have them resonate in a compelling way is fanciful; if GOP messaging was that good, why do they ever lose elections.

The reason critical race theory became such a big issue in the Virginia elections is that for much of the last two years parents in that state, just like everywhere else, have been forced to proctor their children’s education because the teacher unions and bureaucrats who control those schools forced remote learning upon them. And through that experience they got to look over their kids’ shoulders and saw what was being taught, and they didn’t like it.

Perhaps those parents can’t give a Webster’s definition of CRT, but they understand anti-patriotic education and they understand woke BS when they see it, and that’s what they’ve seen. So when Glenn Youngkin promises to help scrub that out of the schools, they’re with him and he wins.

But the bigger issue behind the denial is that it’s gaslighting, and the public is onto it.

Democrat assertions that CRT isn’t real and that all these voters are suffering from delusions are of a piece with virtually everything else coming out of that party nowadays. How many lies did Biden and his handlers tell about Afghanistan and the people we left behind there? How long did they attempt to tell us that inflation was “transitory?” How many lies have they told about the border? How badly have we been gaslit about COVID, masks and vaccines?

When something like last night happens, it’s the public telling them loudly, “We know what you’re doing. Stop it. And stop lying to us.”

To respond to that message by doubling down on all the stuff the public hates, and further to attack the people objecting to them as morons, criminals, racists and insurrectionists, is to pour gasoline on that fire.

Which brings us to the Right, and what lessons can be taken from last night.

There are two in particular we would touch on here. The first of those is last night proved the Lin Wood/Sidney Powell narrative that our elections are permanently broken and that Dominion Voting Systems machines will prevent real elections from happening in America ever again is a giant pile of horse manure.

It always was, though it took a while for that fact to shake itself out into identifiable evidence.

Were there irregularities in the 2020 elections? Absolutely there were. What we know now is the Democrats took some $400 million from tech oligarchs like Mark Zuckerberg, and principally Zuckerberg in fact, to corrupt local elections offices in big Democrat cities in swing states and turn them into get-out-the-vote centers for the Biden campaign using “private donations” as fuel. This enabled ballot harvesting on an unprecedented scale, and within that it’s almost certain there were fraudulent votes introduced into the system in large numbers – and quite likely in enough numbers to flip states like Wisconsin, Georgia and Arizona, and Michigan and Pennsylvania almost certainly as well, to Biden.

It’s unlikely this is ever going to be proven sufficiently to prosecute anyone for what might very well have been a stolen election. But the irregularities of 2020 were a bit like the 9/11 hijackings, in that now that they’ve been done they’re going to be tough to replicate. Well more than a dozen states have made changes to their election laws which would eliminate hijinks like these from happening again. You can probably add Virginia to that list next year with Republicans now in control of the governor’s mansion and legislature.

If ever there was a race the Democrats would have fixed, it was the Youngkin-McAuliffe contest last night. They couldn’t do it. That tells you something.

What that means is Republican voters no longer have the excuse of “it’s all over and elections don’t matter” to keep them on the couch. Last night showed that the loser mentality which has pervaded so many in the party and in the conservative movement is not warranted and can’t be tolerated.

America isn’t lost. America is worth fighting for, and it can be revived and won using the traditional methods.

The second lesson is that while without Donald Trump’s energy and willingness to depart from the status quo the GOP wouldn’t be in a position to have a resurgence like last night signaled is coming, there are some tweaks which need to be made.

Youngkin is a nice guy. He’s tough, he stands up for himself and comes off a little like Ron DeSantis, but he’s not a provocateur. Youngkin stuck to local issues and refused to take the bait when McAuliffe and his campaign wouldn’t stop trying to tie him to Trump. And the voters agreed that Trump wasn’t the issue, even though late last night the former president said it was MAGA voters turning out which won Youngkin the race (which is true, as far as it goes, because Youngkin did need those votes along with lots of others).

There is a good bit of MAGA in Youngkin’s message. He’s a capitalist, he’s anti-corruption and wants to drain the swamp a bit, he’s an anti-establishment candidate. But he’s not a bull in a china shop. And he’s a happy warrior; he doesn’t come off as angry at all.

We’re not saying the lesson here is that the GOP has to move on from Trump. It might well be true that a Trump 2.0 – DeSantis being a very good model, for example – is the way to become unbeatable going forward, but that isn’t the point. The point is that a little less fire and brimstone and a little more calm competence can go a long way.

A little, we’re saying. Because one valid question everyone is going to have is, “Republicans won. So what? Will they do anything?”

And that’s a real thing. It isn’t enough just to apply the brakes to our descent into woke hell. This victory has to mean something. Conservatism can’t just win, it has to go on offense.

In Virginia, the GOP has to push the revival. It can’t just settle for the status quo. Otherwise last night was a whole lot of nothing. Let’s hope that lesson is well and truly learned in advance of next year’s midterms.