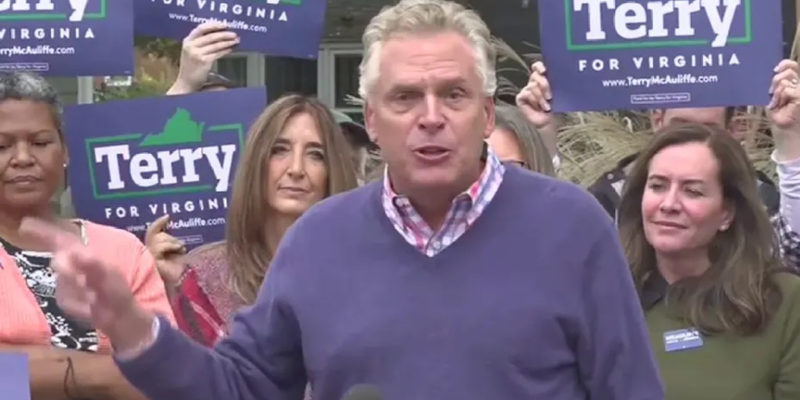 Yesterday, former Democrat Governor Terry McAuliffe received over two hundred thousand more votes than Gov. Ralph “Blackface” Northam did in his victorious 2017 race, but still lost in blue (now purple?) Virginia. The Republican base was clearly on fire, independents had long since soured on the Progressive brand, and Democrats themselves looked despondent and lacked intensity going into the final days of the campaign.

True, Joe Biden had done just about everything he could to lose the race for McAuliffe (and every other Democrat on the ballot), by taking the country on an exhausting ten-month voyage of political ineptitude the likes of which no living American had ever seen. The Biden tour has so far featured a series of stunningly inept miscues on foreign policy, the southern border, the economy, political mismanagement in Congress, and, of course, the ever-present cultural wokeism, and remember, he’s just getting started!

Even so, in the end one single sentence stands out in the debris field that was Terry McAuliffe’s gubernatorial campaign, and, somewhat surprisingly, those words were not uttered by Joe Biden. It was the candidate himself, a former governor of Virginia and head of the Democrat Party, who shouted out the fatal sentence: “I don’t think parents should be telling schools what they should teach,” and thus consigned himself to the political wilderness.

Now an experienced Democrat politico like McAuliffe should have known better than to vocalize those twelve fatal words, but it speaks volumes that he did not. The woke culture that has taken over the Democrat Party has become an echo chamber which drowns out the common sense political instincts of the American people, while amplifying the worst impulses of Democrat ideologues and propagandists. The result was that Terry McAuliffe probably had no clue that he was playing with fire when he destroyed his campaign, and therein lies the tale.

Anger is the great motivator of politics, and any politician who does not appreciate the depth of anger and frustration that parents are feeling towards those responsible for the education of their children, will end up like Terry McAuliffe.

Interested in more national news? We've got you covered! See More National News
Previous Article APPEL: Who Was The Biggest Loser In Last Night’s Elections?
Next Article Thoughts On An American Political Revival