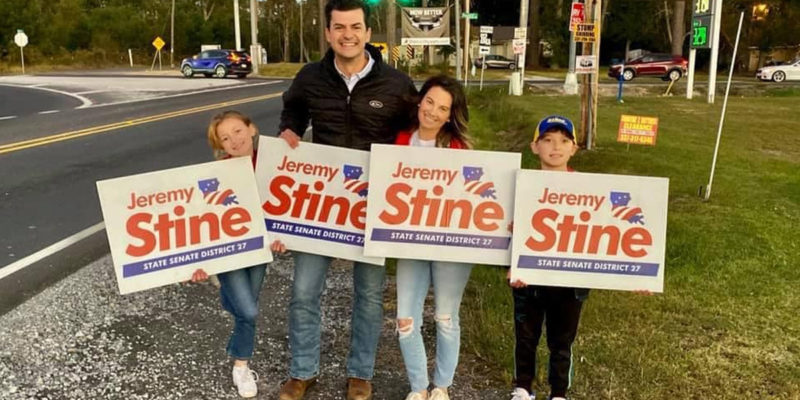 Well, it wasn’t exactly the Virginia revolt of earlier this month, but Louisiana isn’t really at the leading edge of American political trends at our best. Instead, from a conservative perspective, Saturday’s elections worked out about as well as they could have. Here’s what happened…

LaToya Cantrell will be New Orleans’ mayor for another four years, a reality which certainly doesn’t square with her performance over the last four years. But it was a foregone conclusion that Cantrell, who despite destroying the Big Easy’s tourist and hospitality economy with COVID restrictions and mandates, supervising an utterly incompetent Sewerage & Water Board whose offices were just raided by the FBI and whose performance in maintaining the city’s infrastructure has been worse than nonexistent.

Not to mention the disintegration of the New Orleans Police Department under her watch, which has led to New Orleans being a place not even safe to drive through on the interstate.

Nobody in the City That Care Forgot cares. Cantrell was re-elected with 65 percent of the vote against a field of political nobodies.

It’s important to understand that New Orleans is a one-party, machine-driven kakistocracy. It’s literally run by the worst people who live there. Helena Moreno, the microphone-fellating former TV news reporter whose antics on the City Council have the only Fortune 500 company in town actively demanding a plan to divest itself of servicing the city because she is so unreasonable, was re-elected with 85 percent of the vote. In seven city council races, only one Republican even bothered to run. We found out why; Chelsea Ardoin managed seven percent of the vote in District D, which will see a runoff between two virtually indistinguishable Democrats, Troy Glover and Eugene Green.

No one should believe for one second that the regime in charge of the city will change its current trajectory. After four more years of Cantrell and that city council any commercial entity who can get out will be out.

Baton Rouge takes another step on the road to Jackson

We didn’t do much with this, because we already knew what the result would be. But a renewal of the 10.6 mill CATS tax passed overwhelmingly both in the city of Baton Rouge and also in Baker.

Is this something to get upset about? No. Though in a city which wasn’t already locked into the urban Democrat/weaponized governmental failure death spiral you would have looked at the performance of the Capital Area Transportation System in setting millions of tax dollars on fire every year and you’d have concluded there was no way the public would re-up with a tax to overfund that system again and generate even more waste.

There really wasn’t much opposition to the tax’s renewal, because for 10 years the people attempting to impose some accountability on CATS have been branded as racists who hate poor people, and at the end of the day it just wasn’t fun anymore. So they gave up, knowing that demographics alone dictated the tax would be renewed and settling for being thankful that at least it won’t be raised.

At the end of the day, the Democrats who have run Baton Rouge for 17 years have driven too many middle class taxpayers out of East Baton Rouge Parish to have competitive elections. Certainly inside the city limits the die is cast – Baton Rouge will go further and further to the left until there is nothing remaining.

The only thing that can stop East Baton Rouge Parish from being sucked into the same hole Jackson, Mississippi occupies is the formation of the city of St. George. We’ll know if that’s going to happen starting on Jan. 10, when the trial in the current mayor Sharon Broome’s lawsuit against the new city’s organizers begins. If she loses, and St. George is formed, it will likely be a magnet for commercial and residential growth and it might begin reversing the parish’s economic and demographic decline.

You’d think that would be something Broome would want. It isn’t. And when you govern according to the preference for poor and government-dependent voters that’s what you produce.

Meanwhile, Ascension and Livingston Parish continue growing even though floods and hurricanes are doing everything they can to slow both suburbs down.

The GOP wins the most important race of the weekend

New Orleans is gonna New Orleans, and Baton Rouge is gonna Baton Rouge, but while things merely stayed the same in both places a state Senate race in the Lake Charles area has moved Louisiana’s legislature to the right in a not-insignificant fashion. Jeremy Stine, a business leader and a conservative activist of long standing, won a huge victory in a special election for the Louisiana Senate over a Democrat attempting to falsely cast himself as a moderate.

We’re not going to saddle Jeremy with unrealistic expectations. The Senate is not yet a body capable of conservative leadership in Louisiana’s legislature; we’ll need another election cycle before there will be a great opportunity for outspoken conservatives to run the place. But his election definitely moves the ball forward. It needs to be remembered that Stine is replacing Ronnie Johns, one of the most egregious RINO’s in the whole Senate. Johns was the guy who quit the Senate rather than stick around to vote to override John Bel Edwards’ veto on the bill preventing boys from playing girls’ sports, and offered knee surgery as a lame excuse. No sooner did he skip the veto override session than he was appointed as Edwards’ gaming commissioner.

Losing Johns and gaining Stine is a massive improvement and a big win. We would say it’s the most important takeaway from the whole election and we’re ecstatic to see Jeremy in the Senate.

There were four constitutional amendments on the ballot, and none of the four were much of a big deal. The business community put on a sizable push in favor of the first two, desperate as they are for any small legislative or policy victories amid the vast eight-year political wasteland that is John Bel Edwards’ rule over the state.

The result of those two amendments? A push. Amendment 1, which sought to reorganize and simplify the collection of sales taxes in Louisiana, went down to a narrow defeat, while Amendment 2, which shrinks the state’s top tax rate while eliminating the deduction of federal taxes on state income tax filings, narrowly passed. The other two amendments, a cockamamie scheme to allow levee boards founded after Hurricane Katrina to impose property taxes without a vote of the people and a change allowing the Legislature to sweep more money out of dedicated funds into the state general fund in times of budget deficits, also went down. 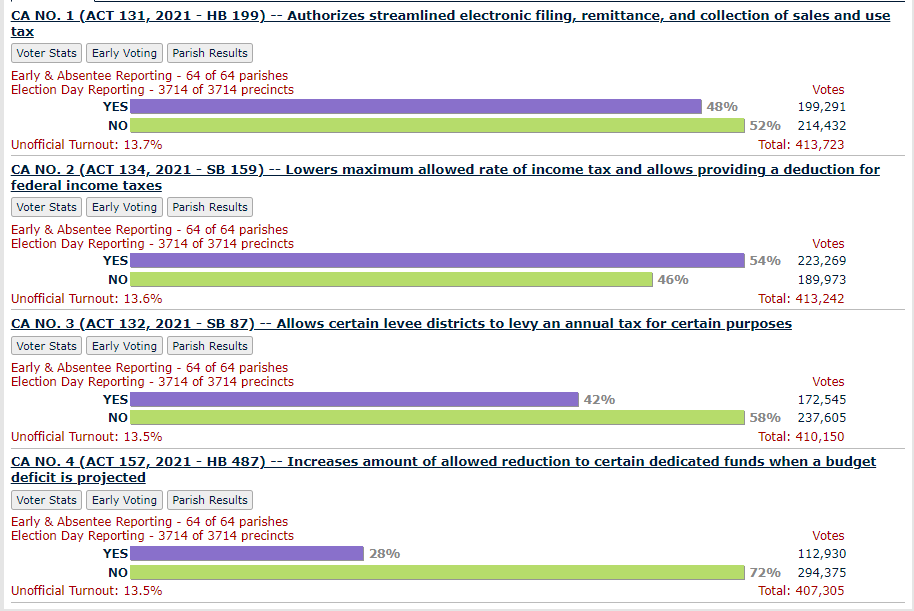 The sales tax thing does need to be done, and it’s going to come back up soon. More than likely it’ll be imposed judicially, because there will undoubtedly be a lawsuit having to do with online commerce and the Equal Protection Clause, not to mention an allegation that Louisiana’s unworkable parish-by-parish sales tax scheme unduly restricts interstate commerce. We’re given to understand this current scheme is dead in the water no matter how much local sheriffs might rail against changing it.

And of course, when you put up a change to the constitution in an off-year election when the only big-ticket item on the ballot is the mayor and city council races in New Orleans, you are getting the most unfavorable electorate possible. It’s a good bet Amendment 1 would have passed last year or next year rather than this year.

But Amendment 2’s passage means that income tax rates in Louisiana are no longer set in the state constitution but in statute, and that means by a legislative majority (subject to a gubernatorial veto) they can be reduced to zero. After the 2023 elections it’s entirely reasonable now to expect that the income tax will be phased out here, just like it’s been eliminated in Texas, Tennessee, Florida and most recently Mississippi.

Which is the most important takeaway of the four constitutional amendments. That fact and Stine’s election are the two consequential results in an otherwise inconsequential off-year cycle.

Interested in more national news? We've got you covered! See More National News
Previous Article What To Do About Those Four Amendments When You Vote Tomorrow
Next Article WILLIAMSON: Don’t Blame Republicans For Four More Years of LaToya