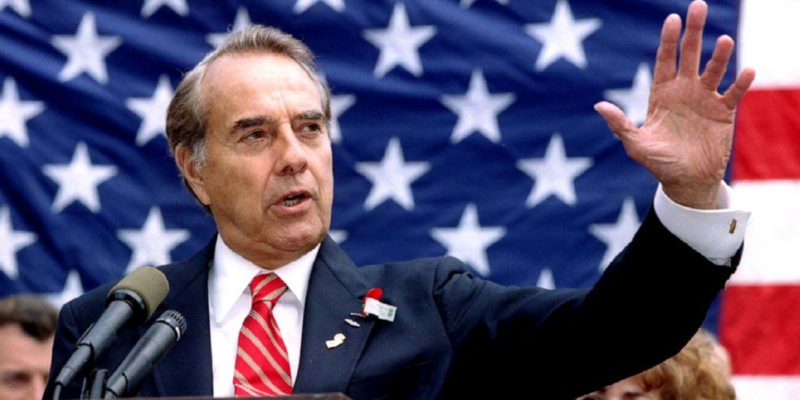 And add to that mixture of noble virtues a self-effacing sense of humor.

These are all words that accurately describe Bob Dole, a distinguished World War II veteran, a long time US Senator, some time Majority Leader, one-time GOP nominee for vice-president in 1976, and after three tries, finally the Republican nominee for president in 1996.

Dole passed away over the weekend at the age of 98.

Dole was actually one of two US Senators to have hailed from Russell, Kansas- the other being Arlen Specter who would be elected to Congress’s upper chamber from Pennsylvania.

Dole’s long trek from western Kansas to the US Capitol would stretch across the Atlantic through war-torn northern Italy, where the army lieutenant was nearly mortally wounded by German machine gun fire,.

He miraculously survived his battlefield injuries, a number of painful surgeries, and years of rehabilitation, learning how to write left-handed as his still-intact right arm was essentially non-functional.

Forever cognizant of his physical limitations from the war, Dole would remain a powerful advocate for the disabled in Washington, making society more accessible for the handicapped through his work on the Americans with Disabilities Act.

Relatively safe in reliably Republican Kansas, Dole rose through the US Senate ranks and President Nixon tapped him to run the RNC.  Dole seemed destined for even higher office, sooner than later.

President Gerald Ford invited Dole to fill the bottom half of his ticket in 1976 though this proved to be a mixed blessing. Though Dole’s presence relieved conservatives as the appointed Vice-President Nelson Rockefeller wouldn’t be on the ballot, Dole performed poorly in the first-ever televised Vice-Presidential candidate debate against Minnesota US Senator Walter Mondale.

Dole would be haunted by this four years later in a disastrous bid for president and even later in 1988 when a testy on-air reply to his loss to George Bush in the New Hampshire primary fatally framed and essentially ended his candidacy.

Prospects for Dole improved with the 1994 Republican takeover of both the US House of Representatives and the US Senate. Then-President Bill Clinton seemed to be taking on water the field of GOP contenders of standing was mostly cleared.

1996 would be Dole’s last bite at the White House apple and it proved to be more challenging than anticipated.

Once again falling short on votes in the First in the Nation Primary, Dole knew he couldn’t afford a repeat of the 1988 bitterness and humorously observed he now understood why New Hampshire was called the Granite State.

After incurring a few more losses but with grace, Dole essentially wrapped up the nomination after big wins in what was once the party establishment firewall of South Carolina and Georgia.

Dole would lose the 1996 presidential race though not from lack of effort, campaigning non-stop in the last few days of the election.

Post-election Dole softened some of his gruff reputation as he was featured in a number of amusing commercials and promoted a collection of colorful political anecdotes.

More than a politician (or Viagra pitchman), Dole was one of the leading faces of the Greatest Generation- people born before the luxuries that would redefine American 20th century living, who knew economic hardships inconceivable today and who sacrificed life and limb in the Second World War.

One image I’ll never forget is of Dole helped from his wheelchair in the US Capitol rotunda to stand and salute the flag-draped coffin of his former rival and fellow World War II vet President Bush.

In a sign of a less partisan era, Dole had previously paid tribute to the late George McGovern upon the liberal icon’s passing.

McGovern and Dole shared both a political bond as both had been defeated by lopsided margins in presidential elections and a military connection, as the peacenik champion had piloted B-24 bombers in World War II.

Residing in DC full-time, Dole would greet from his wheelchair many of his fellow vets participating in “honor flights” to visit the World War Two Memorial on the National Mall.

It would be the final service performed by a man who devoted almost eight decades of his life in varying capacities to his country.

After a long, well-lived life and now reunited in spirit with his brother in arms, Captain Dole can now rest at ease.