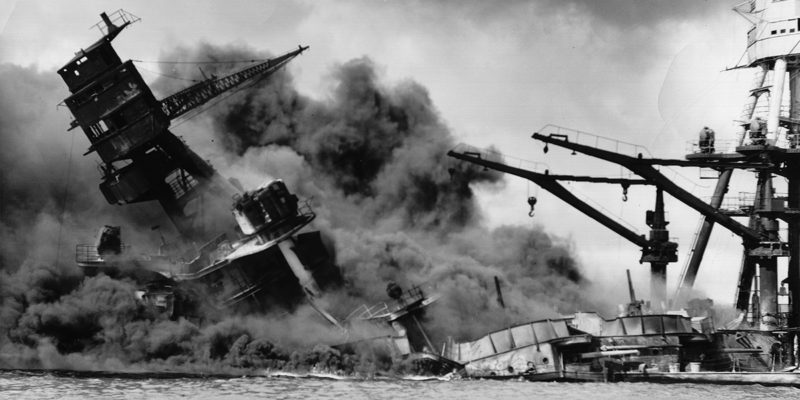 It’s December 7th, the 80th anniversary of perhaps the most important and tragic date in American history.

Yet I’ll bet many of our fellow Americans in all their expertise of revised American history couldn’t tell you the significance of this date. In fact, there’s no shortage of ignorance on the internet.

Instead of re-hashing what happened 80 years ago at Pearl Harbor, I want to focus more on the events that led up to Pearl Harbor and some interesting facts along the way.

Everything that lead up to Pearl Harbor happened because of World War I, which ended on 11-11-1918. If you have trouble remembering that date, just remember it’s the license plate of the car that Franz Ferdinand was assassinated in, though you have to use your imagination a bit. The license plate is “AIII 118” or A-Armistice, II – 11, I1- 11, 18-18.

On that date, Japan was our ally.

Japan, looking to grow its influence in the world, had its own war with Germany during the first war. Germany was more occupied with the Western Front, but was in the mist of a two front war. To be more technical, the war was spread through out Europe, Asia, and Africa, only sparring the American continents despite the Germans’ intent of drawing America into a war with Mexico to keep the U.S. out of the European front. This ultimately backfired and brought the U.S. into the war.

Speaking of Germany, how many of us wondered what would have happened had Hitler been assassinated before he started WWII? But what gets lost in all of this is that Hitler, to the world’s misfortune, survived certain death twice, maybe three times. The first, though refuted, was a gas attack in which his gas mask didn’t seal properly due to his beard and moustache.  Another account was that he was ordered to trim his moustache so that his mask would seal. Now you know the history behind his front teeth brow. In another instance, a British soldier also had him dead to rights, but for whatever reason decided not to pull the trigger. This was confirmed by both the Brit and by Hitler. In the last month of the war, Hitler was temporarily blinded by mustard gas and was in the hospital recovering when the war ended.

Meanwhile, over in England, the political career of a young Winston Churchill was ruined by the disaster in Gallipoli. Churchill was the First Lord of the Admiralty and at his behest, the navy was sent through the strait of Dardanelles. If successful, this would link the Brits to the Russian forces. The attack failed and with his political career washed away, Churchill joined the front lines as an officer. During his political re-emergence, his opponents constantly reminded him of Dardanelles. Churchill was a lone voice in speaking out against Hitler, but his voice couldn’t be heard because of the Dardanelles. When Chamberlain’s treaty with Hitler went awry, suddenly people were listening to Churchill once again. It’s important to speak the truth, even when you don’t think anybody else will listen.

So how did an ally during WWI become an Axis power, only to attack us at Pearl Harbor? As previously mentioned, Japan had their own ambitions during WWI and when the war ended, Japan had a seat at the victors table. That’s all they had, a seat, but they had no real say in the terms of peace. Despite that, in the 1920’s, the Japanese government began to move away from expansion, and the Japanese people were enjoying more freedoms. But by the 1930’s unrest in Japan was beginning to rise and military leaders had begun to seize control of the country. Several incidents, from battles with China, assassination attempts, scandals, and attempted coups plagued the nation.

In 1936, Japan entered a pact with Germany. One year later, Italy would sign on to the pact. Japan was interested in controlling Asia, what the military leaders sought at the conclusion of the first war. Pearl Harbor wasn’t part of Japan’s immediate area of influence, and for a nation focused on its ongoing war with China, why strike out against a country on the other side of the world? The answer has more to do with Hong Kong than Pearl Harbor.

Hong Kong was under English rule, and an attack on England could bring their ally -United States, into the war. England, still reeling from the Blitzkrieg attacks on England and the attacks on Crete, was crippled. Russia was tied up with a war against Germany. France was under German control, the axis power controlled Europe, and the only country standing in the way of Japanese control of Asia was the United States. So on December 7, 1941, the Japanese launched an attack on Pearl Harbor where approximately half of the U.S. Navy’s battleships were located. The idea was to cripple our navy so that we could not come to the aid of the Brits . On December 8, the Japanese attacked Guam, Wake Island, and Hong Kong. If only we had General Milley around back then, certainly the Japanese General would have given him a call and told him they were about to launch a sneak attack.

While we do have those who are the first in line to blame America for everything, we can’t blame America for the Japanese attack on Pearl Harbor. Ultimately it was the Japanese government that made the decision. Countries can fall very fast. In Japan’s case, the 1920’s saw the growth of liberty, but the next decade, much unrest, the formation of a dictatorship, and wars.

“December 7th, 1941, a date which will live in infamy,” most certainly will repeat itself somewhere in the world. Pearl Harbor has many lessons for us to learn, but among them, the importance of having a strong military and a foreign policy that pays attention to what’s going on in the world.