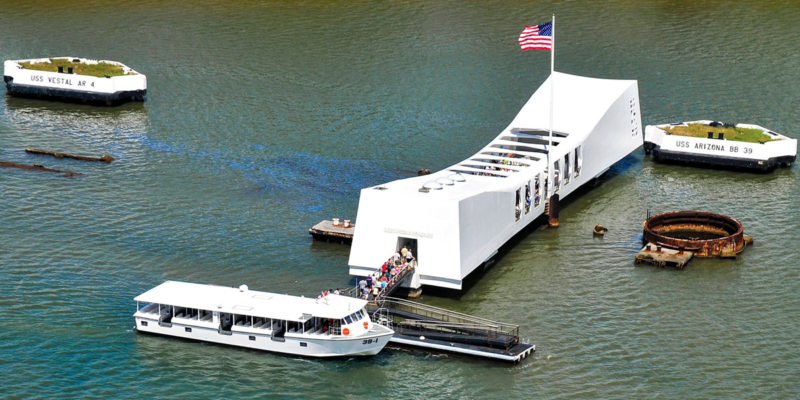 Eighty years ago at 7:55 AM Hawaii time, naval aircraft from Imperial Japanese carriers launched a surprise attack upon the American military installation at Pearl Harbor.

The battle would last 90 minutes but would lead to forty five months of fighting and national mobilization to wage simultaneous wars across two oceans as the destruction and casualties suffered that morning at Pearl Harbor compelled a reluctant nation into yet another global conflict it did not seek yet could no longer avoid.

Another 405,000 American servicemen would share a similar fate to those lost at Pearl Harbor, dying on the island of Guadalcanal in the south Pacific, along the grueling Bataan Death March through the jungles of the Philippines, cut down by machine gun fire on the beaches of Normandy, and killed repelling the Nazi counter-offensive in the snow covered forests of the Ardennes.

Today at the Pearl Harbor Memorial on the Hawaiian Island of Oahu are two battleships from that era serving as bookends of the American involvement in World War II, one representing devastating tragedy, the other complete victory.

The first is the mostly submerged hull of the USS Arizona, which was hit with four armor-piercing 1700 pound bombs.

It was the last bomb dropped that ignited the forward magazine, tearing the Arizona in two, and killing 1,177 of the battleship’s 1,512 crewmen.

Almost half of all the combat deaths at Pearl Harbor were related to the Arizona explosion.

The bodies of over 900 sailors and marines who served on the Arizona during the Japanese attack were never recovered from the battleship and remain inside the sunken wreckage.

To honor this sacred place, a memorial platform was constructed spanning across the middle of the Arizona, the hull of which is visible just below surface and the aft gun turret protruding above the waterline.

Beyond to physical structures and relics, nine quarts of oil, referred to as “the tears of the Arizona”, continue to bleed from the ship every day leaving a small sheen in the harbor that serves as an unintended reminder of the ship’s sinking that day.

At the memorial’s far end is a Wall of Honor listing the names of those who died on the ship and below that those of survivors whose ashes were later interred within the Arizona, reunited forever with their brother sailors and marines.

Almost two million visitors a year take a break from Waikiki’s beach, don appropriate attire, and visit the memorial, a sign that though those who lived through and fought in World War II are far fewer in number, future generations of Americans have not yet forgotten Pearl Harbor and seek to pay tribute to the fallen with their presence.

Moored near the Arizona is the battleship Missouri, whose bow and powerful 16″/50 caliber Mark 7 guns face the destroyed battleship as if on eternal guard duty.

Commissioned in 1944, the Mighty Mo participated in the American invasions of Iwo Jima and Okinawa and it was on that battleship’s deck on Sunday morning September 2, 1945 in Tokyo Bay Japanese governmental and military officials signed the documents of surrender bringing the Second World War to an end.

As President Franklin Roosevelt stated in his message to Congress seeking a declaration of war, the date December 7th has continued to live in infamy in America’s memory as a day we honor our countrymen who perished in the first attack against the United States in World War II.

We should also be forever mindful of the sacrifices of those who paid the ultimate price to protect and defend our country in the trying days after Pearl Harbor and carry forth the same resolve embodied by the heroes of the celebrated Greatest Generation who did much more than avenge Pearl Harbor in the Second World War but won for America and for much of the world, allied, belligerent, and liberated country alike, a just peace.

Interested in more national news? We've got you covered! See More National News
Previous Article BLANCO: “A Date Which Will Live In Infamy”
Next Article BLANCO: Here Is Biden, Putin On The Fritz