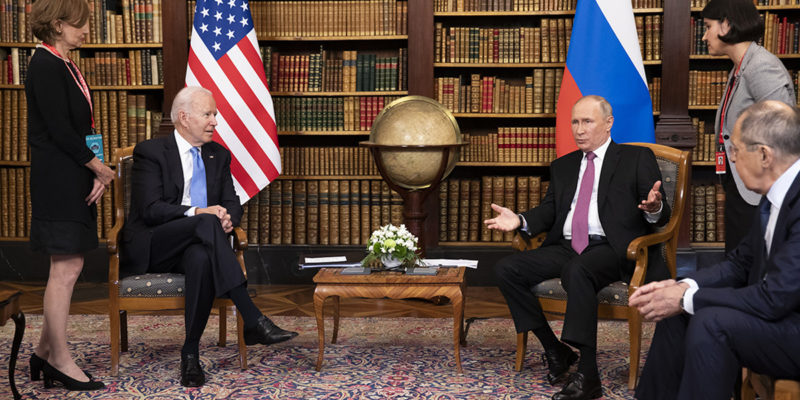 On previous occasions, I opined that President Joe Biden is making the world a more dangerous place. This article, that article, and this other article are three examples. It’s not that I’m your Claire Voy aunt that I could see this coming, but rather because I learned history – and not revised-political-agenda history. I adhere to the edict, those who don’t know their history are doomed to repeat it. I look at the things we are doing, look back at the past to see what the previous results were, then say, oh, this will be the result or similar result.

Call it “following the science” of history. Call it being sane enough to not want to do the same thing over again and expecting different results. Call it having a brain, but it doesn’t take a genius to read the tea leaves of history.

And here we are, with Biden in a virtual showdown with Russian president Vladimir Putin. Don’t you feel safe knowing the only thing standing between an outbreak of war is Joe Biden talking tough with Putin? While I understand that Putin isn’t as mean as Corn Pop, my gut instinct is that Putin is going to eat Joe’s lunch, come on man. Say what you want about Trump, Obama, Bush, Clinton, Bush Sr., or Reagan, but over the past 40 years, we have not had a President present such incompetence. Even Bernie Sanders wouldn’t be this incompetent, though he’d probably tell Putin “Go ahead Comrade, make my socialist day,” instead of standing up for Ukraine.

One the the things that stuck out to me from Biden’s meeting with Putin is that Biden is pointing at China as a mutual adversary. While that could be true that Russia could see China as an adversary, they are also long time allies. Immediately following the end of WWII, China fell into a civil war with the communists coming out on top. Over the next forty years, they had a strong alliance with their communist friends of the Soviet Union, even using the Hammer & Sickle symbol.

So, if you’re in Putin’s shoes, if China is an adversary, they are only a recent adversary, while the United States has been a Russian adversary his entire life. So, who do you think Putin is more concerned about?

And then there is the perception, which Biden poured gasoline on with his disastrous pullout from Afghanistan, of America as a rapidly declining power and China as an ascending one. It would therefore be strategic – and Putin is nothing if not a strategic thinker – to align with China rather than the USA.

This brings me back to a historical period, the immediate aftermath of the assassination of Julius.  Brutus and Gaius Cassius Longinus had formed their army and had the blessing of the Senate. Marc Anthony had raised an army of his own and it was clear that Marc Anthony and Brutus were going to go to war. The wild card here was Octavian, who had raised his own army. Brutus and the Senators thought they could control then young Octavian and didn’t see him as a threat. In fact, they recruited him in their war against Marc Anthony. When the battle came to fruition, the guy that Brutus thought he had in his pocket turned and joined forces with Marc Anthony to defeat the Brutus-led army. Marc Anthony and Octavian had an uneasy alliance afterwards, but they combined forces and defeated their common enemy.

To me, this is the focus of three major powers, Biden being our Brutus as he’s shown his willingness to stab people in the back, China is the clear adversary so they would be Marc Anthony, and that would leave Putin to be our Octavian. Seems to me that our wild card Putin shares a vision of the future with China, not with the United States. It’s arrogant to think China and Russia must be obedient to us, especially after we just stabbed the Afghans in the back. Add to that, our military leaders such as Mark Milley and his boss Lloyd Austin are far more interested in purging the military of whiteness and unvaxxed than they are about military preparedness. Seems like opportunity is knocking for both Russia and China. My guess is that these two countries are watching to see if we’re willing to pass the Biden’s Biggest Blunder bill and push our country closer to bankruptcy; after all, you can’t fight a war you have no money for.

You might say, “China’s interests are not Russia’s interests,” and that’s true, their vision is that they are each their own world leaders, but just because they have their own ambitions, an uneasy alliance between those two countries is both convenient and sensible.

Flash back to World War II: Russia is in a war with Germany and they sign onto an alliance with the United States and Britain. They didn’t join forces with us because they had so much in common with the United States. They were a communist nation- a socialist nation, just as the Germans were under the rule of National Socialism. They didn’t join the war because we were attacked. We signed onto an alliance with Russia because they were already at war with a country we were going to war against. It was an alliance of convenience to an already existing war.

So when I heard that Pendejoe Biden held China up as a carrot on a stick to Russia, I was perplexed. Maybe he thinks Putin looks like a bunny rabbit and will hop on it. I don’t know  what’s going through his head, does anybody? I’d ask Kamala but she seems to be off on vacation with Waldo and nobody can find her.

Putin has his eyes on regaining the old Soviet empire and Ukraine is one of those countries. If he invaded Ukraine, would China do anything about it? Probably not. It seems to me that even if China and Russia were adversaries, they would share an uneasy alliance to defeat their common enemy.  Besides, China has their eyes on Taiwan and… stay tuned.